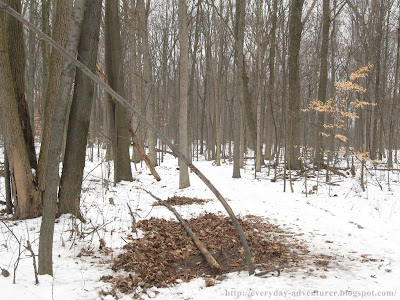 What you see here is just an ordinary snowy scene in the wintery forest. Or is it? It seems that we have a mystery here. There are no answers; only a bit of speculation. Take a look right in the front of the picture. What do you see?

The snow has been moved away in that area where you see all of those leaves and earth. There is also a smaller area back farther with the same thing. It looks as if that branch has been moved back and forth across the ground to make that happen, but who or what did it? 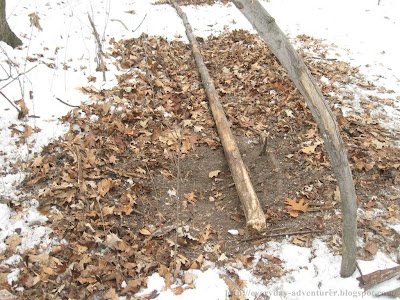 I've been watching this spot for several weeks now, and whatever is making these scuff marks continues to do this over and over. The marks are fresh every time I look. These pictures are actually a few weeks old, but now without the snow on the ground here, the strange marks still persist.

At first glance I thought maybe a person went by and moved this branch. People can do the strangest things, even out in a forest like this one. But after closer examination I'm fairly sure it was another kind of animal that did this. The question is why? And how do I know? 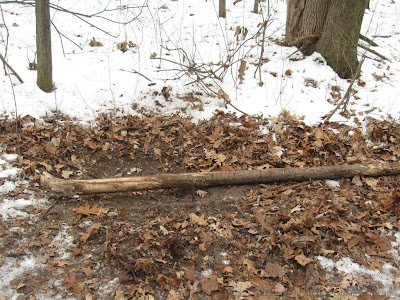 That lighter color on the end of the branch was made by gnawing teeth. It doesn't look as if an animal was trying to chew through the branch, but maybe hold it in its mouth or something similar. The marks on the ground underneath are also somewhat irregular, as if something were digging just a little bit down there.

So maybe an animal was nosing around around and under this branch for some reason. I don't know why it did it. Maybe it was looking for food. Maybe it wanted the branch, which is highly unlikely. I think for now this will remain a mystery, but I'll keep watching. Maybe time will reveal the secret. This is very interesting. Have you ever seen anything like this before? Have you ever seen any other type of mystery marks outside?

I'll be back next time, and hopefully a little more very soon.
Posted by Ratty at 3:26 AM