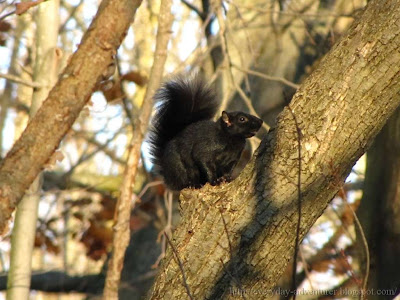 I have awakened from my turbulent slumber to bring you some absolutely amazing pictures of the latest little creature that I have discovered. Now, many of you who have been longtime readers here already know the identity of this shiny black bundle of fur. That's right, it's a black squirrel!

But this isn't just any black squirrel. It just happens to be the subject of the best pictures of a wild black squirrel I've ever had. I've had some better pictures of some tame squirrels that liked to beg for food, but this squirrel is one of those that I like to call Ninjas of the Forest. And they are usually only seen as ghostly black streaks.

This one either missed my presence in the forest, or it found itself paralyzed under my astounding hypnotic gaze. And, of course, it could have just all been a coincidence. We can never be sure which it may be, but I have no doubt that you can figure it out. 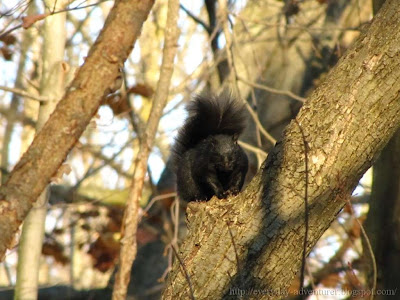 Before I go on, I'd like to answer a few questions that were in the comments section of my last post. First, I am almost always alone when I go on my adventures. That hasn't made it very easy recently because of my car accident. My head doesn't seem to be improving as I hoped it would. I am still having severe headaches and confusion.

Because of this, I have been having a bit of trouble keeping a proper concept of time. I had no idea that I hadn't posted anything here for so long. I haven't been out visiting nature much either because I'm just not up to it yet. It doesn't help that the days have gotten so much shorter here and the temperature has dropped so much.

It all gives my mind the feeble excuse to sit here and stare at the wall rather than do what I really like. I actually have to concentrate extra hard to get anything done at all. But I've decided to do just that. I'm going to make a bit more of an effort to get back to my old self again. One of these days I'll be back here every day again. But let's move on from the whiny excuses. 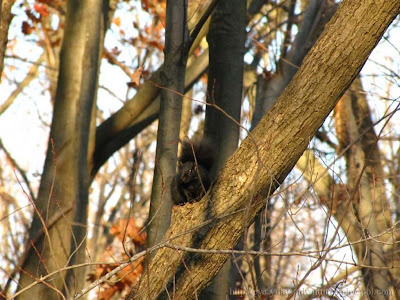 Even though it's not the season for many other animals right now, the black squirrels are out in full force. And the odd thing is that they seem to be taking over the forest here. I've been seeing the population of the fox squirrels dwindling, and the smaller black squirrels are moving into their territory to fill the empty space.

It's all very interesting to witness, but I don't want to lose my precious fox squirrels altogether. The variety is what I like so much about the squirrels around here. I can walk just a quarter of a mile and find three or four different types of squirrel. Black squirrels are a fun novelty for me, but the fox squirrels are my oldest friends among them.

I started this blog to keep me going back out to my hiking trails. And as I write all of this right now, I wish I were out there right now. Maybe that is the key. I need to get back to what I love the most. I miss the squirrels, the trails, all of the other animals, and nature altogether. Just this last time I saw this wonderful black squirrel. Who knows what I might see next! 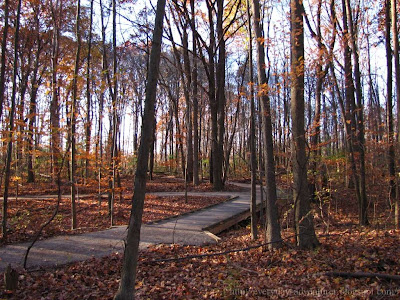 It's been awhile since my last update. As I wrote that last one I had intended to increase my presence here in the blogging world and the world of nature. It was a good plan, but many plans don't seem to work out very well at first.

It was the day I had gone to the neurologist. I told myself at the time that I would begin by visiting all of my favorite blogs and leaving a few comments. And I was able to do a few. But I was given a prescription for some pills to try to get rid of the headaches I've had since the accident.

Ever since all of that, things have been nothing but a blur. Oh, the headaches never went away, but everything else did. The one thing I have had has been a whole lot of sleep... And some crrraaazzy dreams. But those aren't fun for me to share. What I'm more interested in is nature. 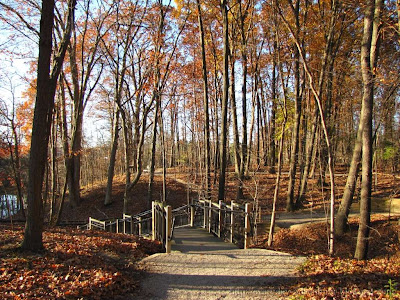 The pictures in this post are from the second time I have been out since my car accident. I believe this was from the day after my last post, but my memory is still not very good. These pictures show some of the small bridges I routinely cross in this small nature park.

I think I've taken pictures of that first one from every angle and at every season now. I never get tired of it, but I only share it rarely because nobody wants to see the same thing over and over all the time. I actually see something different every time I approach that bridge. It's a thing you have to be there to experience properly.


The second picture just above is the walkway that leads to the fishing platform on the lake. This walkway was among the first pictures I ever showed from this park. The difference is that I took those from the opposite direction, from that hill in the distance of the picture. 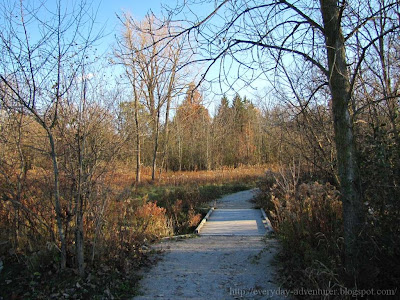 This last little bridge is really the first. This one is at the front of the park. When you cross this bridge you are officially on the trail into the park. It feels like crossing over into another world when you are walking over this small bridge. On this side is the parking lot. On the other is the entrance to the forest. When you get to that side, the parking lot is no longer visible. Only nature.

And I think we'll end it there for now. I'm not sure when my next post will be right now. It could be tomorrow or it could take another week or two. I might pop up in your comments section before that. I just can't be sure. But I've decided that's okay for now. I can only do what I can do. I'm just glad that I can still do it at all. 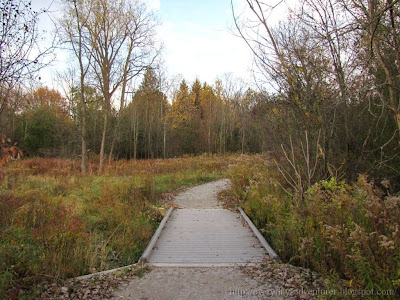 I did it! I'm back!!! After almost exactly two months, I'm back! Well, at least partially. The photos you see on today's post are brand new! This is because I was able to go on a very short hike the other day! Can you see how excited I am by all the exclamation points?

I'm going to attempt to take you through my little adventure, but my mind is still mostly in fiction writing mode. Writing fiction is actually quite a bit different than what I write here. It takes a different mindset, and it is much more difficult. Both methods are satisfying in their own way though. Anyway, here's what happened on my walk.

Driving to this place is a short trip for me, so I can do that, but not as often as I'd like yet. I had already decided to be careful and take things slow. I knew I had to turn around as soon as I began to feel anything odd. And with those thoughts I got out of my new Jeep and entered the trail. 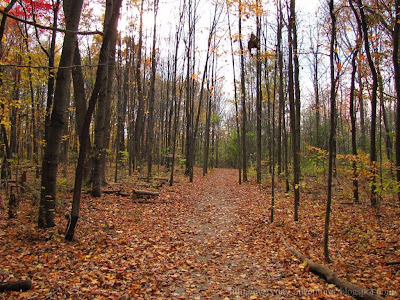 The first thing I noticed was that everything looked much different than the last time I was out here. Back then it was late summer, and the leaves on the trees were full and green. Now they are a dull brown and they're falling to the ground. This wasn't too surprising, but it was still a bit of a shock.

Unlike many people, I'm not the biggest fan of the fall season. In the depths of my mind it represents a form of death, or at least a deep slumber. I think of it as the end of nature for the year. Logically I know that's not true. But as much as I try, I still can't change that feeling. 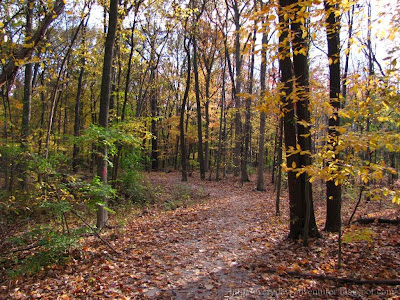 But I have to tell you, seeing those fall leaves and being able to walk into that red and brown forest was one of the most beautiful and wonderful experiences I've had in a very long time. I felt free once again! I haven't been able to have this old familiar feeling in far too long. If anything can change my deep down opinion of fall, it must be this.

As I got deeper into the forest I realized that below my neck everything seems to feel as good as ever now. But my head was throbbing just a bit, which I was very conscious of. I knew I was going to have to be careful. 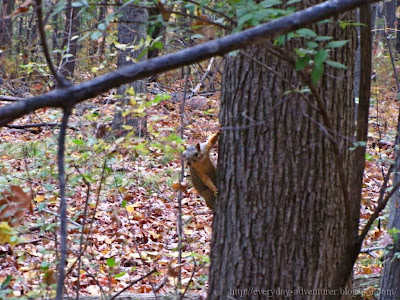 At right about the halfway mark to the back of the park I was greeted by a familiar face. It was a happy little fox squirrel! He stopped on the side of a tree and just clung there and stared at me. A squirrel was the last animal I had seen before the car accident. And now a squirrel was the first animal I had seen on my first hike back. As much as I talk about them it seems so very appropriate.

Shortly after my meeting with my little friend I began to feel something familiar in my head. The pain was coming back, along with a fogginess of consciousness that all told me it was time to turn back. This was the first time I've been out with these feelings, and it wasn't pleasant at all. It was like being in a bad dream.

I had to slow my pace quite a bit, but I knew I was fine enough to make my way back to my Jeep. The farther along I went, the more I stumbled as if I were drunk. I had to be very careful, but I also learned exactly what I was capable of for now. 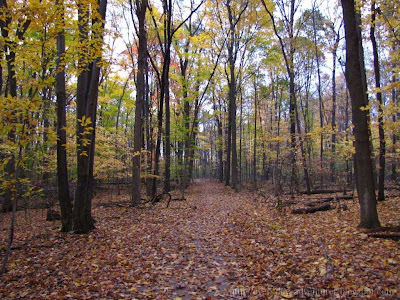 I made it back to the Jeep okay. And don't worry. I never took a big risk. I had a cellphone with me, and I also had someone waiting for me at the front of the park. For something like this I made sure I had a big safety net to work with. I'll only go back alone when I absolutely know I can do it.

This very short hike was a huge step in my return. I know I still can't hike or blog every day yet. I still have to rest more than anything else, and even be careful not to think too much. But this was a beginning. I now am pretty sure that my head injury is the only thing still holding me back. And maybe more hikes like this one will help with that.

All I kept thinking throughout this short hike was that I'm back. I'm back!


Nature Center Magazine - Today I have for you another in the great collection of some of the best nature videos on the internet.
Posted by Ratty at 3:04 AM 30 comments: