Down The Rabbit Hole

What you are about to read is my second adventure with my old friend Alice. She was a real life little girl back then who had an odd habit of duplicating a good old story. Now she is all grown up and these adventures are just a memory. I never completely showed her in my pictures to protect her anonymity. 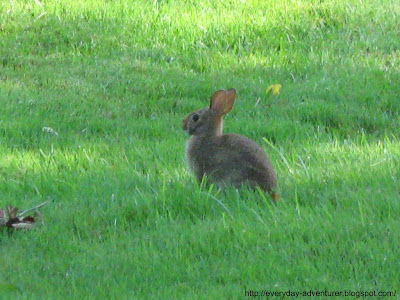 Alice was considering in her own mind (as well as she could, for the day made her feel very sleepy and stupid), whether the pleasure of making a daisy-chain would be worth the trouble of getting up and picking the daisies, when suddenly a White Rabbit with pink eyes ran close by her.

There was nothing so very remarkable in that, nor did Alice think it so very much out of the way to hear the Rabbit say to itself, "Oh dear! Oh dear! I shall be too late!" But when the Rabbit actually took a watch out of its waistcoat-pocket and looked at it and then hurried on, Alice started to her feet, for it flashed across her mind that she had never before seen a rabbit with either a waistcoat-pocket, or a watch to take out of it, and, burning with curiosity, she ran across the field after it and was just in time to see it pop down a large rabbit-hole, under the hedge. In another moment, down went Alice after it! 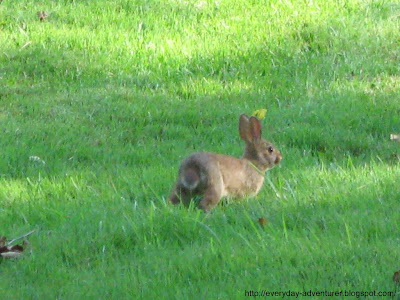 I liked having Alice with me at Orchard Lake Nature Sanctuary, so I invited her to come along with me to Heritage Park. After a while we came to a particularly nice area, and Alice said, "Look, a rabbit!" I told her we should be very quiet so we could get some pictures of it. I said the pictures might not be very good though, because we might not be close enough.

She said, "I can get really close to it. I've done this before with rabbits." I asked her where she saw a rabbit before. She said, "In my back yard. I know how to get right up next to them." Then she proceeded to try to sneak up on it. There it went, with Alice right behind. 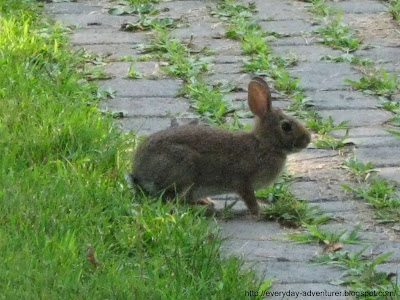 I told her it wasn't working with this one, but she insisted that she could get closer. The rabbit continued to move away as she pursued hot on it's heels. 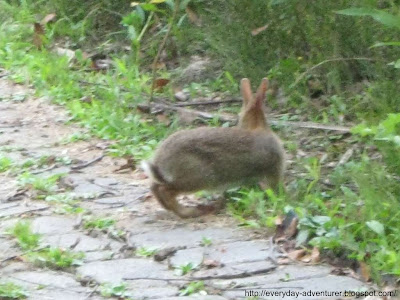 I was taking as many pictures as I could as the rabbit moved away. Alice kept after it, and I told her maybe she should stop. She said, "No, really, I can do it." But the rabbit was quickly moving away now. Maybe I could get one last picture. 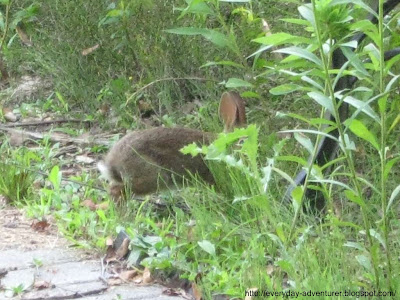 Well, I got half of a picture. The rabbit then ran into the forest. Alice went to plunge right in after it when I told her more firmly now to stop. She finally stopped and said, "I can still see it. If I go in there I can chase it back out so we can get more pictures." I told her not to do it because we don't want to scare it anymore. She eventually reluctantly agreed, and I said, "Let's sit down and rest. This is a nice place." 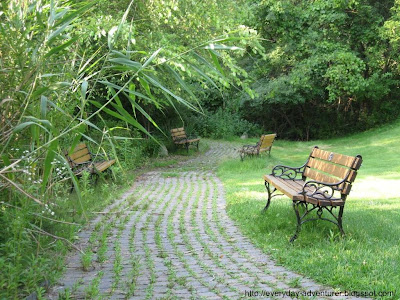 As we sat down on one of these benches, I thought to myself that if she would have gone into the forest after that rabbit I probably wouldn't have been able to keep up with her. I was glad I was able to get her to stop. Wow, I'm tired. What is it with Alice and rabbits?

You know, when I started this Everyday Adventurer thing, I never thought I'd find myself in Wonderland. 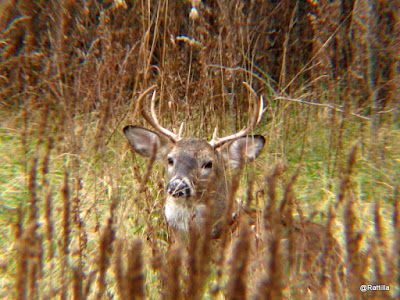 I haven't been able to get out much to get any new material to post so I decided to use some good older pictures of mine and write a new post about the memory. Maybe I'm a little rusty from not writing in so long, but I'm excited to get back here. And maybe I can get out for some new stuff soon.

I remember how excited I was when I first spotted this big guy at the front of my favorite old nature park. I was just leaving when I spotted him lying there to my right. He didn't have the biggest rack of antlers, but he was a big deer, the biggest I had ever seen up to that point.

I remember telling myself to appear calm and move slowly so I wouldn't frighten him away. I was excellent at keeping deer calm back then. Some of them even approached me out of curiosity. They ran from almost anybody else. This one didn't mind me at all. I got lots of pictures. 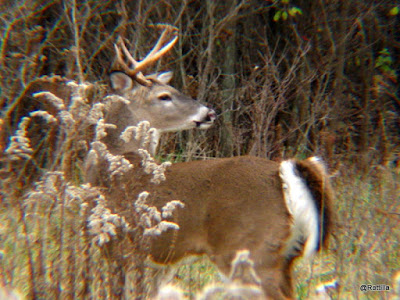 After my initial bunch of pictures I decided to move on and give the big boy some peace. As I moved up the trail I looked back and noticed that I could get more pictures from a different angle. So I stopped and began to do just that. There was one problem though.

It was right as I was about to take the first of my new pictures that another guy came walking up the trail from where I had come. As soon as the deer saw this new person it jumped right up and prepared to run. See what I mean about other people and deer? It was just mostly about the way I moved back then around wild animals. They never felt threatened by me. 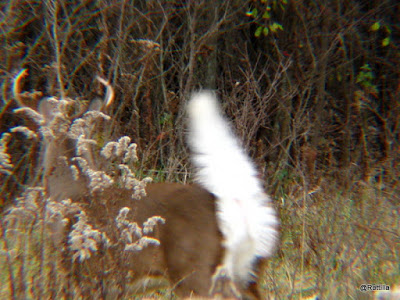 It took no time before the deer lifted its tail in fright and ran off into the thick brush and trees and was never seen again by me. You may notice when the deer was clearly frightened that he never looked my way. He only looked toward the threat. And I was every bit as close as the other person.

My point here isn't to brag that I'm wonderful with animals. It's just to point out that you can put them at ease by adjusting your body language just a bit. I haven't been able to do this for the past few years because I haven't had these types of encounters. But I just know I could do just as well with these country deer too. It'll happen one day. I'll talk to you later.
Posted by Ratty at 6:00 AM 12 comments:

I'm still here. I just don't have any material for a new post right now. I hope to have something soon. Thanks for stopping by. I'll talk to you later.
Posted by Ratty at 11:36 PM 6 comments: