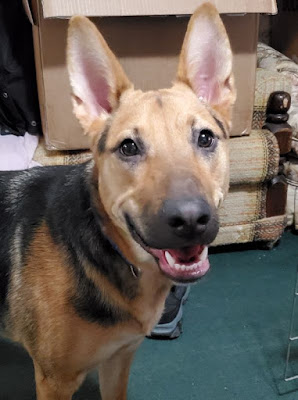 Here is something my dog Delilah likes to do. Let me tell you a story about my annoying dog.

Because of the current health situation, my mom has come to stay at my house with me. It's because I live out in the country away from most civilization and most people. It makes things a lot easier for her to stay safe and healthy.

I have everything set up nice for her. I bought her all the stuff for her new bedroom. She has a new bed and a big television in there so she can watch TV whenever she wants. I also made sure she has her own good chair in the living room. She also has a laptop she keeps on a little stand right by her chair. I got her hooked on the internet many years ago.

Because she doesn't see as well as she used to, my mom has a little light that plugs into the USB port on her laptop. This way she can see her keyboard when the light is a little dim. The light is an LED light that can be turned on or off by just touching it. 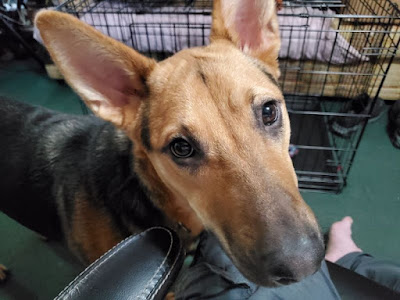 Delilah likes my mom a lot but she also likes to irritate her as much as she can. I constantly have to yell at the dog to stay away from my mom for the many things she does to bother her. Some of it is accidental, but some of it is clearly on purpose. Delilah loves mischief.

My mom isn't afraid of dogs or anything like that. On the contrary, most dogs are a little intimidated by her and always try to be friends with her. Delilah is no exception. My mom is mostly indifferent to dogs, but she says she thinks Delilah is kind of amusing.

Anyway, one of the things Delilah likes to do to irritate my mom involves that computer light. Delilah is very intelligent and she observes things whenever she can. She watched my mom and figured out that the computer light can be turned on by touching it.

So Delilah waits until my mom isn't looking and will sneak over and turn that light on whenever she thinks nobody will notice. She is definitely sneaking. I've seen her to it many times now. She seems to think it's funny because of the reaction she gets. My mom usually thinks she turned it on herself by accident. 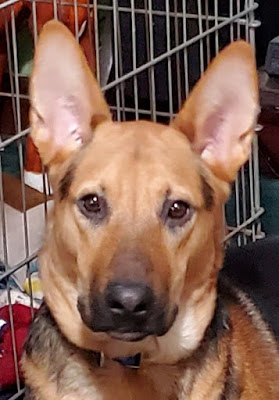 I also can't keep Delilah in her kennel cage by herself anymore either. She figured out how to open the latch and get out. I thought at first she just got lucky but I've seen her open it several times now. It's okay though because I don't really need to keep her in there anymore anyway. She's usually pretty safe roaming the house by herself if nobody is home.

And that's all I really have this time. There are plenty of Delilah stories because she's a weird dog. But I don't think you don't want to read them all. I mostly just needed to write another post to let you know I'm still here. I keep hoping to get something from a nature park soon. One of these next few times I'll do it.

Delilah And Her New Clothes 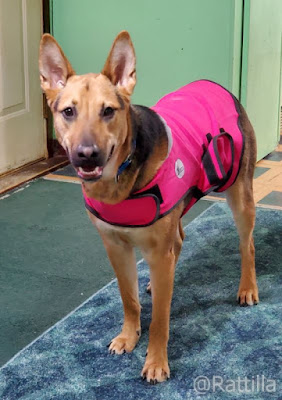 It's pretty difficult to get anything new to post right now, but I have something for you anyway. This is Delilah in her Thundershirt. This thing is to calm a dog that has anxiety problems. It does it by squeezing them a little. Delilah is a pretty happy dog normally, but she still has a terrible time while riding in the truck. That's why I got this Thundershirt for her.

I wish I could say that it works great but I haven't had a chance to try it out yet. She doesn't really like wearing it but she also doesn't mind it much. I think of she wore it enough she'd come to think of it like she does her collar. She gets very upset if I remove her collar. All of my dogs have been like that. I think the dogs think of their collar as part of them or that it is their clothes.

I would have gotten Delilah another color of this Thundershirt, probably blue, but I forgot to choose the color. I usually assign my dog a color when I first get them. Delilah has a blue collar. Isabella had black. And Tilly before them had pink.

Anyway, I live in the country, so I can still go out to places like a hiking park if I want to. So maybe I'll try to get some halfway decent pictures from a place like that soon if it doesn't flood too much here. I really need to post a little more often if I can. I'll talk to you later.
Posted by Ratty at 10:10 AM 4 comments: