What I Found In The Hills 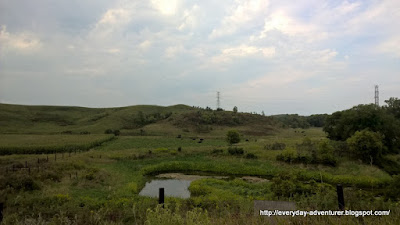 So here I am showing you a picture of what looks like random hills. Why would I do that without there being something there? I probably wouldn't, but just wait till I get bored one of these times. That's not what this is. I actually found something in these pictures.

You have to look really closely in the back of the top picture, just in front of the hills. You'll see some black dots there if you look hard enough. There are only black dots because I took the picture with my phone. My phone camera is great but it just doesn't zoom as well as my big camera. The second picture is the one that we want. 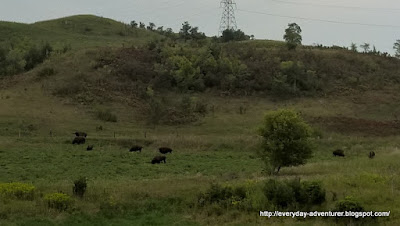 This second picture is a crop of the first one. They're still hard to see, but you can now see that I have a picture of wild bison (buffalo). Sure I've had closer pictures of buffalo before, but those aren't the wild ones. These animals are roaming free in the biggest preserved area of prairie in America, Broken Kettle Grasslands.

These are the closest buffalo I've seen here yet. I wish I would have had my good camera with me. Then I would have been able to show you some excellent pictures. Still, this was a good event for me. And I've seen evidence of them being even closer at times. They leave biiig droppings.

This spot is quite a ways from where I saw them before. Most of the places they go aren't places I can see. But I'll look for them here from now on, and I'll bring my good camera. At least I got to see them at all. That made it a very good day. I'll talk to you later.
Posted by Ratty at 4:00 AM 14 comments: 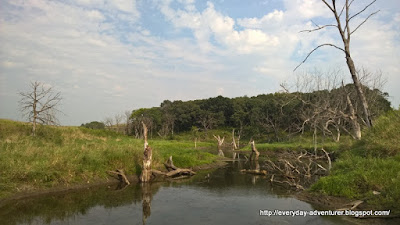 I decided to go for a drive around the countryside the other day. I do it quite frequently. This time I took a few of the smaller dirt roads that I've never been on before. I thought I've been everywhere until I drove through some of these roads.

Along the last road I traveled I noticed a few signs to a nature area. This place is really close to my home. After a few miles I found the place and took another long dirt road into it. At the end of the road I found this lake. It's called Deer Creek Lake. Strange name. 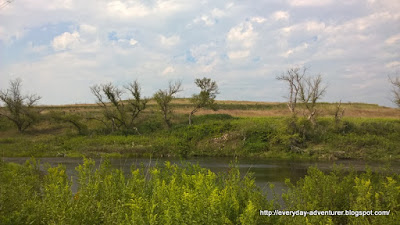 I didn't intend it this way but I'm showing these pictures exactly backwards of how you see things as you go in. I wanted to show the lake first and I wanted to show you the best picture first. That first picture is kind of nice when you click to look at it full size.

I had to go all the way down the path to see these two sides of the lake. The first picture shows the right side and the second shows the left side. I had to lift my camera above my head to get a shot of the lake above the tall weeds. 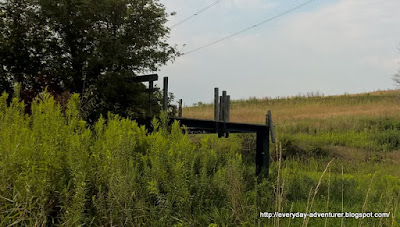 The boat ramp ends in these tall weeds instead of the water. It all seems like the water should be maybe about twenty feet higher than it is now. I wonder if that's the case or if I just don't know what I was looking at. 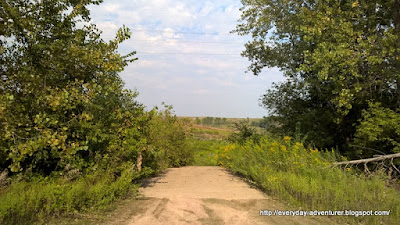 Above you can see the beginning of the boat ramp. I know it's a boat ramp because of the horizontal ridges along the ramp that are the same as I've seen on other boat ramps. I guess I should have taken a picture of that part. 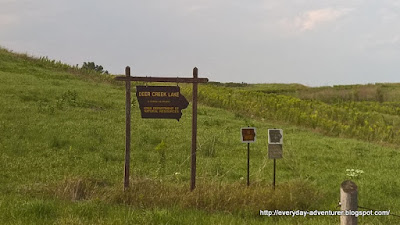 Here's the sign you see at the beginning of the road that leads in to the place. I probably won't be back anytime soon because the road is in really bad shape from rain water washing deep gouges into it. My truck is four wheel drive but I still worried about getting stuck.

Even though it was a shame this place has fallen into such disrepair, it was still a fun little adventure into a place I've never seen before. And just across the main road there is another creek where I saw an egret resting there. It flew away before I could get a picture.

This post was a little later than I intended because I was installing Windows 10 on a third computer. I've had it on my main computers for about a month and I really like it. I always go for the new stuff. It combines the best of Windows 8, and there was good stuff there, with the best of Windows 7. But enough about that. I'll talk to you later.
Posted by Ratty at 4:00 AM 11 comments: