I Miss The Forest 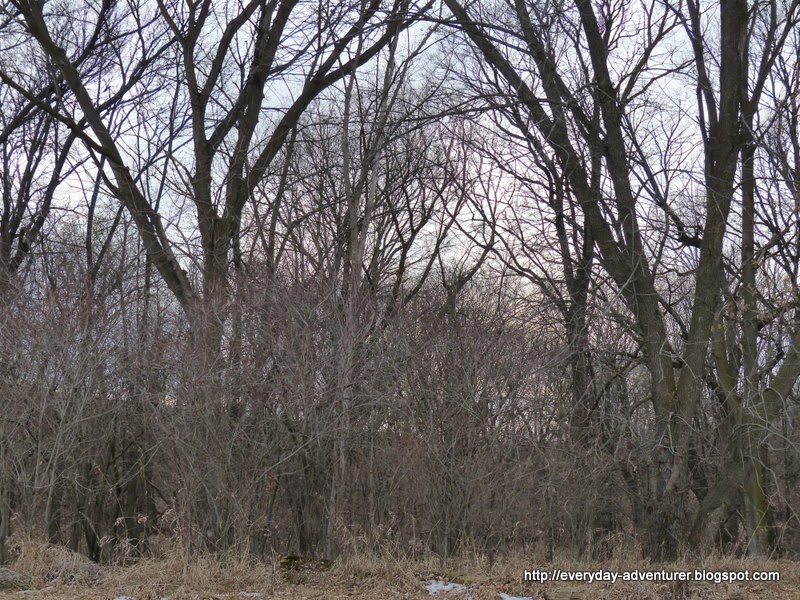 I've been enjoying the nice weather we've been having around here. Even though the temperatures have dropped slightly, we've pretty much had spring days around here.We had almost no snow this winter, but we sure did have cold. I'm glad that cold is gone, but I kind of miss the snow.

Another thing I miss is the forest. Living here in Iowa, I've noticed that there aren't as many trees as there are back in Michigan. Maybe some areas have more, but we have mostly open grassland. There are small forests in places, and I go to them as often as I can, but I have yet to get back to them this spring.

My picture today is from one of those places. It was still hunting season when I was there so I didn't go in. I was just there for a few minutes to take in the sights and sounds of nature. With the warmer weather, I'm expecting animals to come out a little bit more, so I keep telling myself I'll be out there on the nature trails soon.

I hope to have more nature type things to share pretty soon. I like the man-made things around here, but I've been doing almost all nature on this blog for years, and I miss that. I'm hoping I can mix that back in this year now. The picture above is just one tangled forest, but I love it. I'll talk to you later.
Posted by Ratty at 4:00 AM 16 comments: 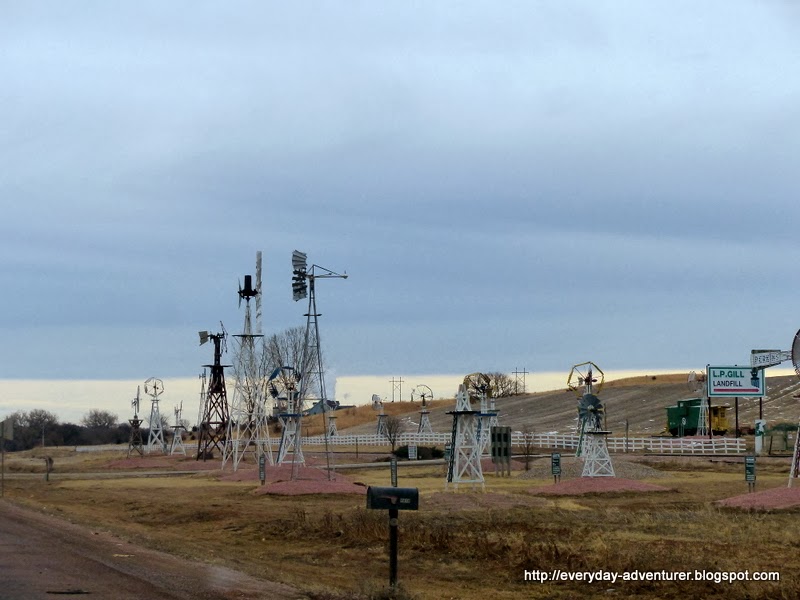 I couldn't get a proper spot to take pictures from so I could show you this place. Even though there are no signs that show it, this place looks kind of like an unofficial windmill museum. It sits on the side of a busy road, with only one driveway.

I got pictures from the side of the road and from the driveway, but I just couldn't find a good spot to show you this place the right way. I keep saying that because it was so frustrating. From farther down the road it looks wonderful, but pictures don't seem right from there either. 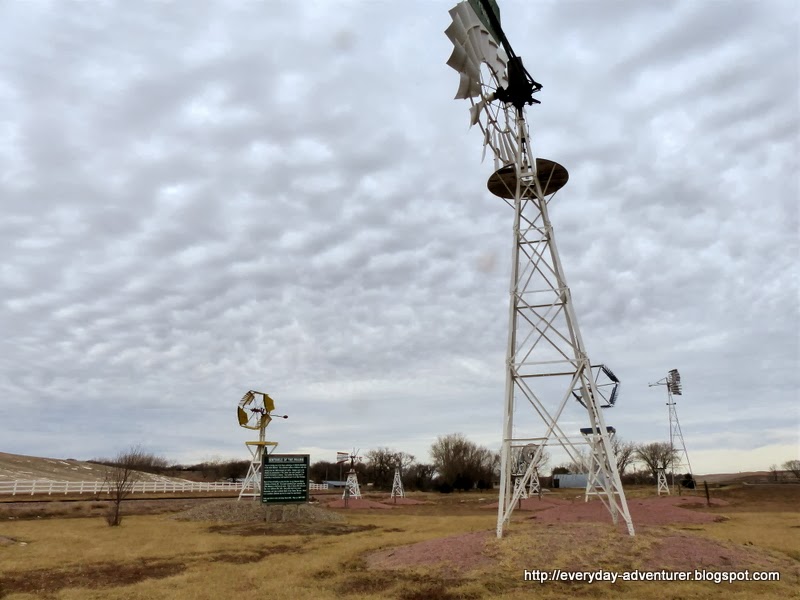 I got out of the truck from the driveway to take a few pictures, and I got what you see here. The pictures look good in HDR, but the windmills are so spread out that I could only get a few at a time. My best solution is to share more pictures in this post than I usually do. 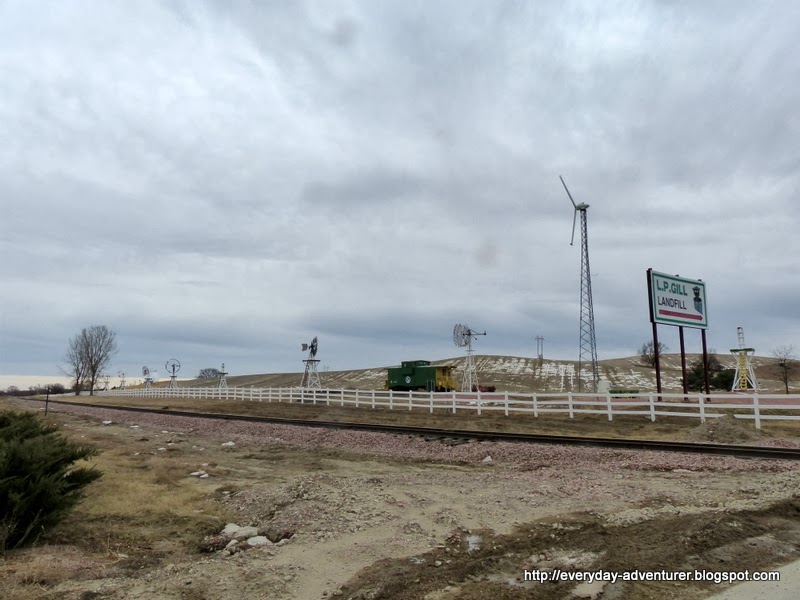 I should have taken some closer pictures of the signs so that I could remember what they say. I seem to remember that they were unrelated to the windmills though, so that probably wouldn't have helped. I'm sure I'll be back, so I'll get another look at this place sometime.

I found this place on my way from Sioux City, Iowa to Ponca, Nebraska. I wish I knew why all the windmills are there. It's possible the explanation is on one of the signs, but I seem to remember that there was nothing. I guess that makes it a mystery... For now. 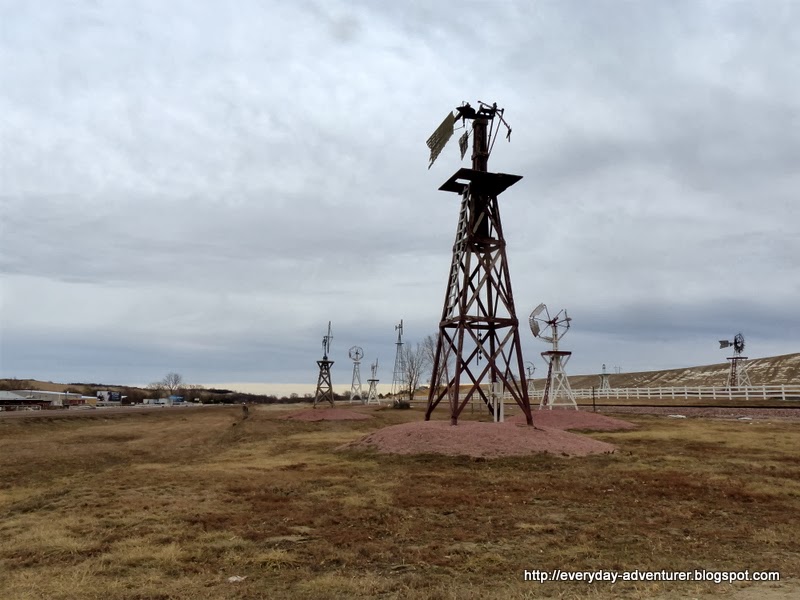 Even though this is a bit of a mystery, I have the pictures to show you a unique place on Earth. I keep finding fascinating places around here. Most people wouldn't believe such fun places would exist in this part of the country, but I still keep finding them.

I never found such unique things back in Michigan, but then I never really got to explore so much when I was there. I still wish I could go back and see what's there as well, but I've been having such fun finding new things here. Things like a bunch of windmills may not be for everyone, but they certainly are for me.

I've been kind of sick for the past week so I haven't been out on any new adventures. I'll have another post when I can get some more pictures. I hope that's kind of soon. Maybe I'll look for some birds right around here, or something like that. I haven't done that in a while. I'll think of something. Talk to you later.
Posted by Ratty at 4:00 AM 17 comments: 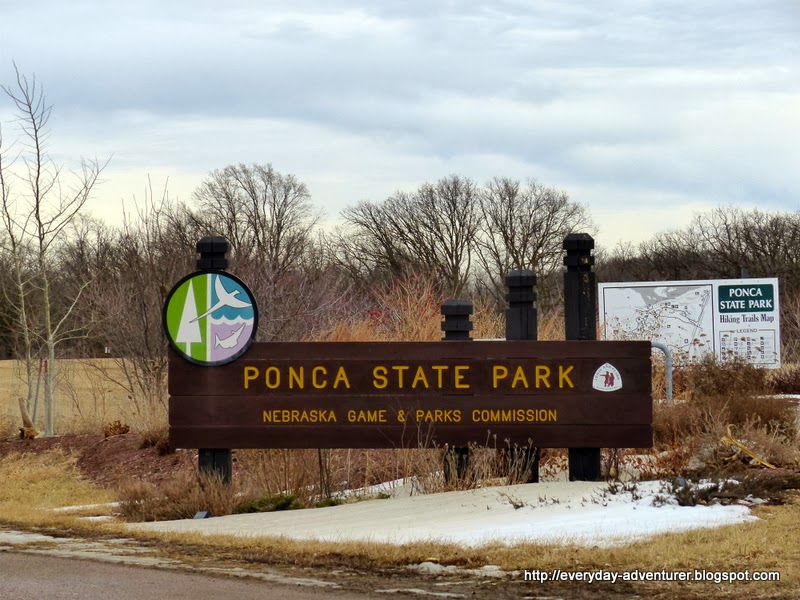 I took quite a few pictures at Ponca State Park, so I thought I'd share a few of my favorites with you. I took a couple of these hoping they'd come out good. I don't usually get my wish, but I think I did with these. I took all of these in HDR and I think it really shows. 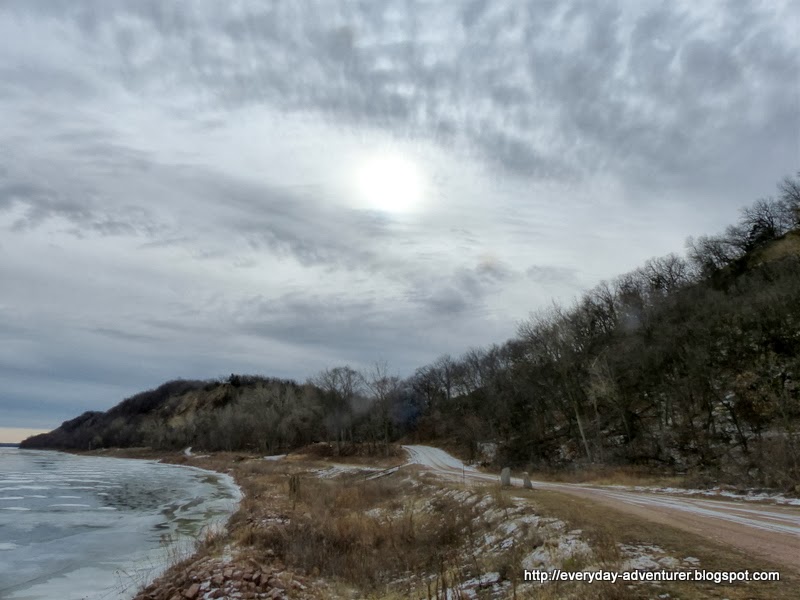 I took this one above because I was looking into the Sun. It was behind the clouds, but you could really see the outline of it in the original picture. When I reduced the size of the picture to put it on here, it kind of lost something. You can see it as that brighter spot in the middle of the clouds. I like the dramatic look of the clouds. 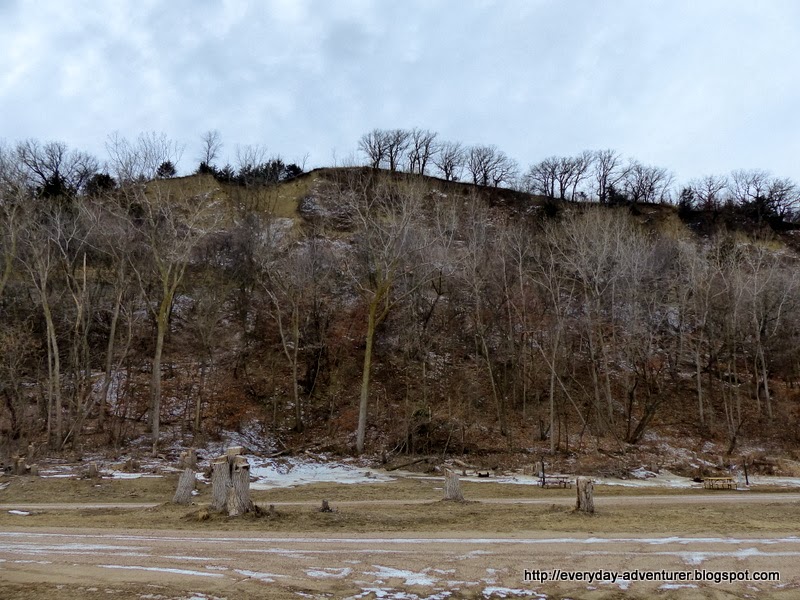 This picture above doesn't really look very special here for some reason. I took the picture to show how high the hill in the background really is. You don't really get to see it here. The hill goes straight up on this side and it's huge. 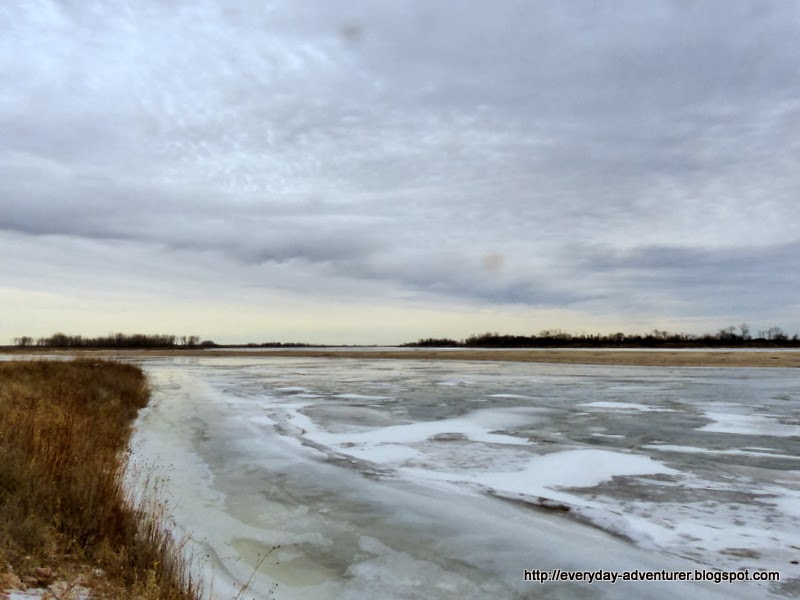 Even though everything is frozen solid here, I get the impression of crashing waves when I look at this last picture. I was disappointed by the cloudy day when I was there, but I think the bit of gloom they added made the pictures come out better than they would have on a sunny day.

I guess this post was all about the pictures. I might have just shared them with no writing, but I always have to say something. I hope my short descriptions helped a little bit. These pictures were kind of fun for me, even the one with the park sign. I always take a picture of the park signs. I'll talk to you later.
Posted by Ratty at 4:00 AM 12 comments: 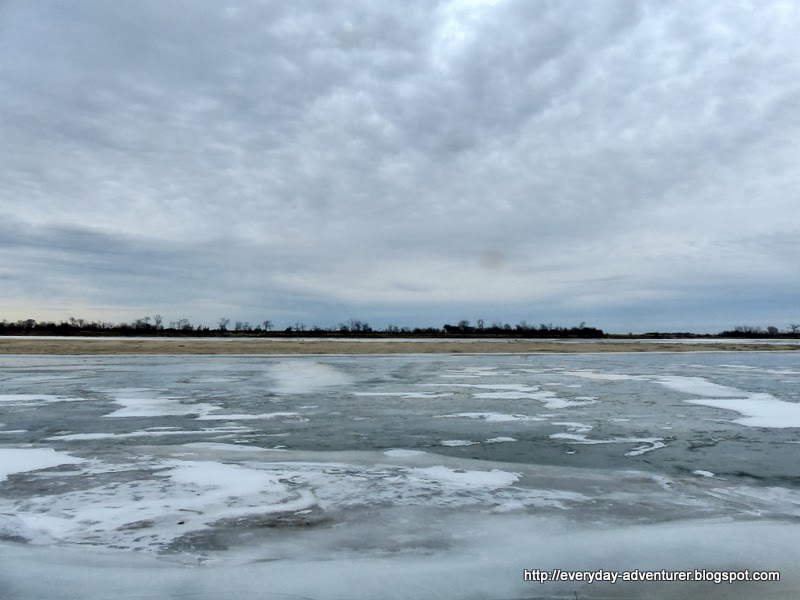 I visited Ponca State Park a few weeks ago. This is what the Missouri River from there looked like at that time. It was completely frozen. It's no secret that this winter has been bitterly cold. The good thing for me is that it appears that the deep freeze is over for the year here.

We had our biggest snowfall of the year when it got down so cold once again after a brief warming. It appeared that our snowless winter had ended. We finally had several inches of snow on the ground, and I was staying off the snowy roads for a few days. 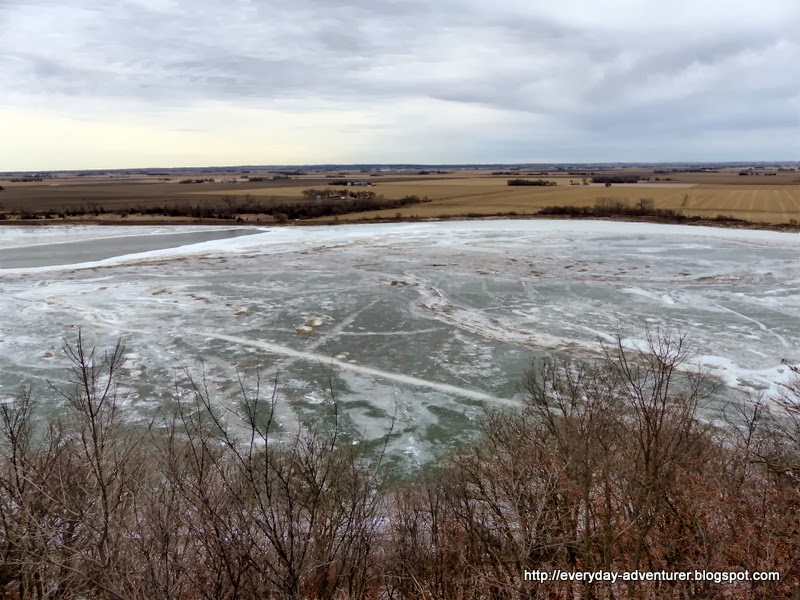 It didn't look like the snow was going to melt any time soon because of the extremely cold weather. On top of that I made a big mistake relating to the cold weather. To keep my pipes from freezing, I have to leave a little bit of water running in the house at all times. I made the mistake of turning off the water one night, and the pipes froze solid.

It took me a couple of days to figure out what to do. There is a crawlspace under my house where the pipes are. Early in the morning I took my infrared heater under there and turned it on. I was only hoping and guessing that it would help, but that evening my water came back on. I got lucky. Really lucky. 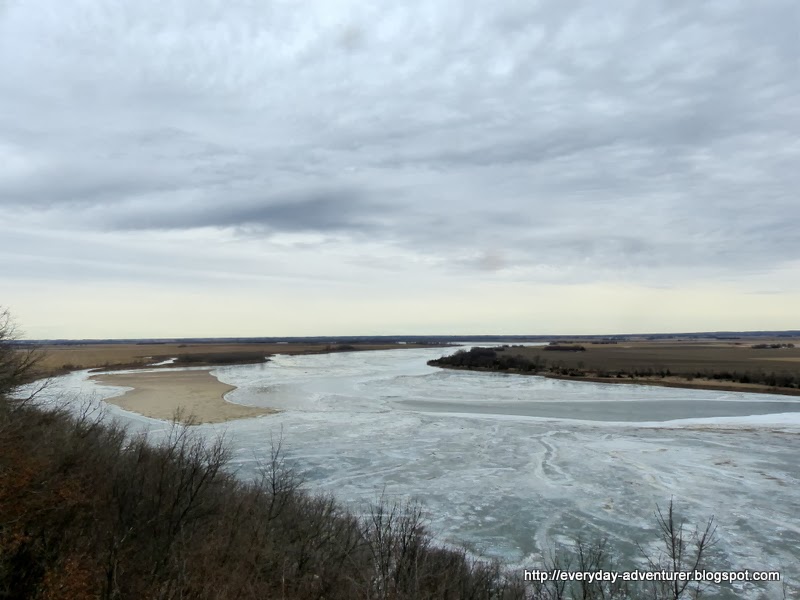 I've been using my wood stove again this winter. I think I mentioned that in my last post. Doing all the work involved with burning wood may sound like a lot of work to most of you, but I have to tell you that when you get used to it, it becomes one of the most enjoyable activities you can have. And this stove heats better than anything else. My dad built this stove right. He was an amazing man. 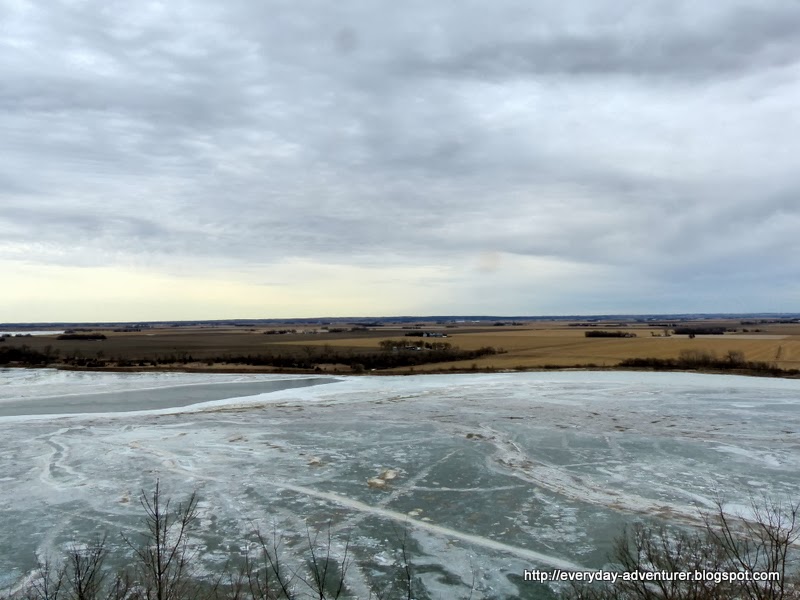 As you can tell, I'm not really saying much about my pictures. That's because they're a few weeks old so the experience isn't very fresh in my mind. I really didn't know what to write about them, so I thought I'd just bring you a few other things that are on my mind. It works better when I do that.

This river is probably thawing out by now. It appears that our deep freeze is over for the year. Didn't I already say that? We're finally seeing the beginnings of spring around here. That should be a good sign for the rest of you.

Now that the weather is warming up a bit, I'm hoping to be out traveling a bit more again, and I'm hoping to be abler to get back onto a few nature trails. That part's going to be hard because I've let myself get too out of shape this winter cooped up from the cold. I'll have to start slowly, but I will start. I'll talk to you later.
Posted by Ratty at 4:00 AM 13 comments: 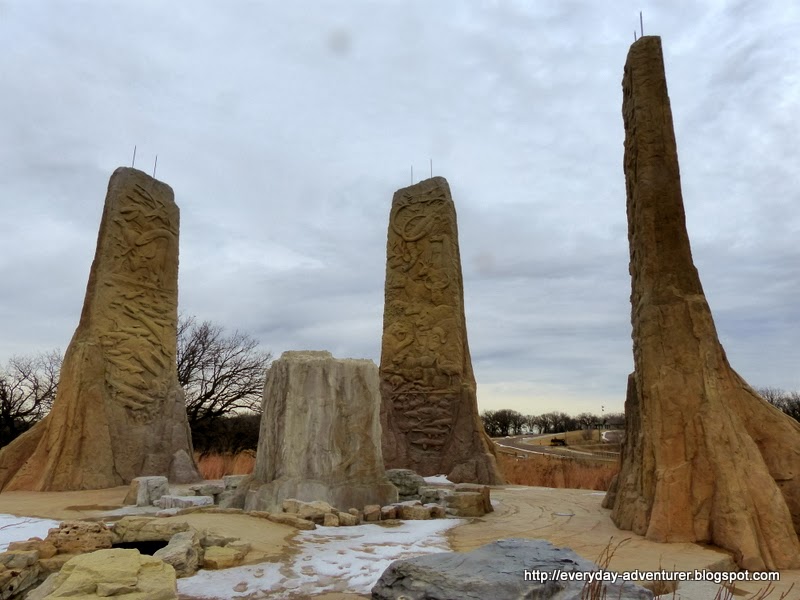 I have something for you that I never thought I might see. These stone monuments were a completely unexpected discovery. I found them at the entrance of Ponca State Park in Nebraska. The only other thing I know of in the world like this is Stonehenge.

I know there are other places in that area that are similar to Stonehenge, but none are as famous. I'm sure this place wasn't thinking of Stonehenge when they came up with it. Only I was. This place is impressively big, so I feel satisfied with seeing it.

I should have shown you the carvings on the stones up close. They show the natural and human histories of this place. You get to see everything from dinosaurs to humans carved on these stones. I took pictures of everything, but I just didn't know how to share it all with you. 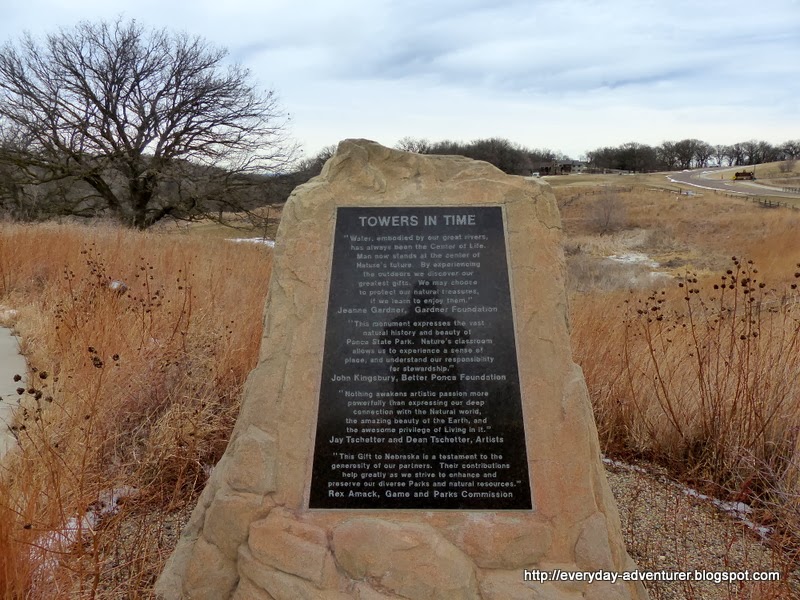 This stone above tells the story of the monument. I won't tell you everything it says, but I will tell you that it names the stones as the Towers In Time. They really do fit that description as I described to you before. 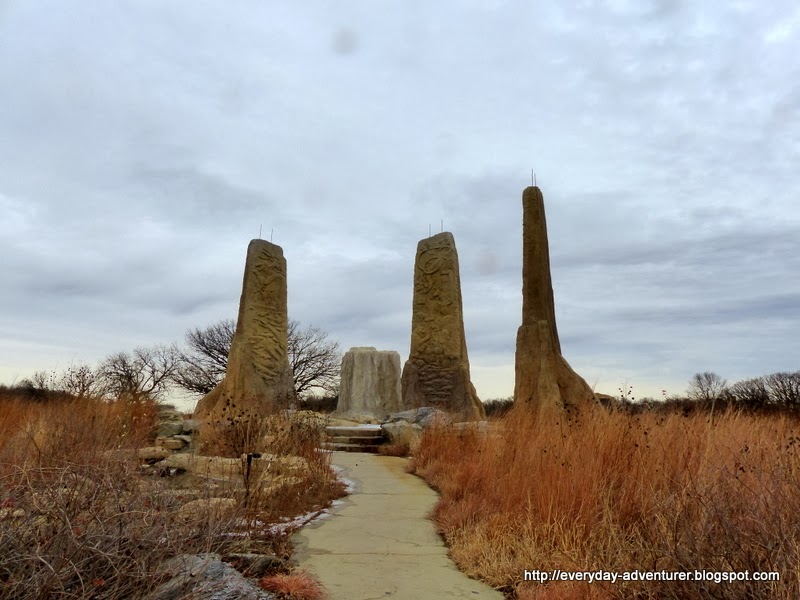 I feel a little bit frustrated right now because I'm too busy to post as often as I'd like. It actually took me several days to get this one out. I did it piece by piece. When I don't post often I begin having trouble thinking up what to write. I'm having a little trouble right now.

I do hope to revisit these Towers In Time when the weather is better. Even so, I kind of liked the way the clouds were in these pictures. They gave everything a bit of a dramatic effect. I'm just glad the park was even open. Some aren't around here. I'll talk to you later.
Posted by Ratty at 4:00 AM 18 comments: