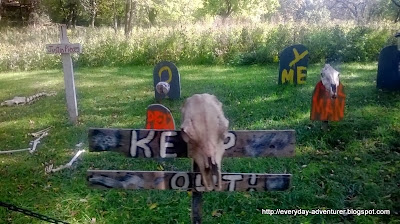 My last Halloween post features this creepy graveyard. It looks kinda creepy, doesn't it? Well, maybe not. But it was still fun to look at while I was there. I keep wondering if that's a real cow skull in the front of the picture. It's very possible since there are so many cows around here. A graveyard with real skulls.

Halloween is almost here. Do kids still Trick or Treat where you live? Wherever I go they don't seem to do it as much as they did when I was a kid. We seem to be losing one of the best times of the year. I hope I'm wrong about that. Anyway, I wish you all a Happy Halloween!

The Waiting Is The Hardest Part 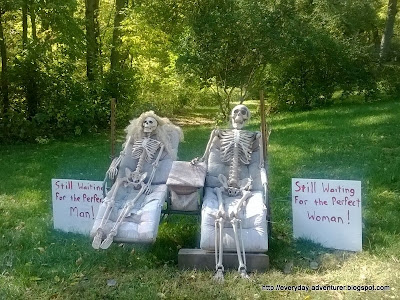 These two have obviously been waiting here for a long time. I don't know why, but when the one on the left saw me she jumped up and ran towards me. I didn't want a skeleton chasing me so I jumped in my truck and hightailed it out of there. I wish I would have taken some pictures of that!

I took all of the Halloween pictures from the last several posts at Ponca State Park in Nebraska. I didn't reveal that little bit of information before because I didn't think it was needed, but they deserve some credit for putting up their cool Halloween display. I have one more post of these to go.

Talk to you later. 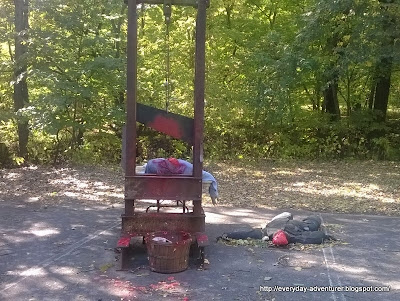 I'm not really sure what to say about this one. I don't have anything humorous to say. It's just a good Halloween scene to scare you when you see it at night. A guillotine with a couple of victims. I wondered where the heads might be, but I guess they're lying there in the bucket.

I look at the guillotine in the picture now and think of how long it must have taken to build it. There used to be a machine where I used to work that looked very similar. It even had an up and down moving part like that blade. So I know with a few small modifications that this prop guillotine could actually work. Interesting.

Swinging In The Breeze 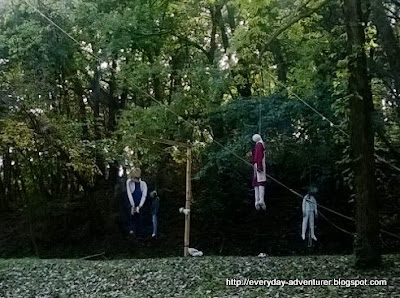 I think I have a theme for the week. I don't know what these people did to get hanged, but I'm glad I wasn't one of them. For all of you who live outside of America, they do this kind of thing all the time here. It's fun for everyone, except for those who are on the end of the ropes.

It's getting close to Halloween so I'll be torturing you with scenes like this one at least a few more times. There are some good ones and some bad ones. I'll let you decide which is which. I liked them all. I decided to keep these posts short so I'll talk to you later.
Posted by Ratty at 4:00 AM 14 comments: 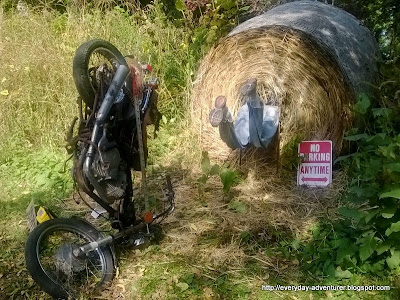 I came across this guy as I was driving around looking for something to photograph. I asked him if he needed any help, but he didn't answer me, so I figured he was fine. I wanted to tell him that there was a no parking sign there, but I saw that he was kind of busy.

He sure must have liked it there because he didn't move the whole time I was there. I see bales of hay like that all over the place around here, but I never knew they were good to rest in like that. I finally figured he didn't want to talk to me so I moved on about my business. It was a pretty good day. 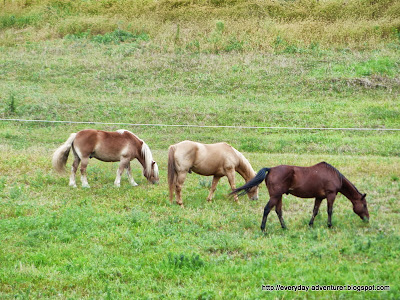 I drive by these horses several times a week so I thought one day that I should share them with you. They're actually not the only horses I drive past, but these are the privileged ones I've chosen. Maybe one day I'll pick some other horses to show you.

I'm kind of distracted today. There's been a lot of good geeky stuff going on for me in the past few days. The day before yesterday I got a new robotic vacuum cleaner. It vacuums the floor by itself while I sleep. I always wanted something like that for purely nerdy reasons. It's doing a marvelous job so far.

There's also a big update to Windows 8 that came out yesterday. My internet connection is too slow for me to have downloaded it all the way already, so I'm right in the middle of that. The computer geek part of me can't wait for this. I'm excited. 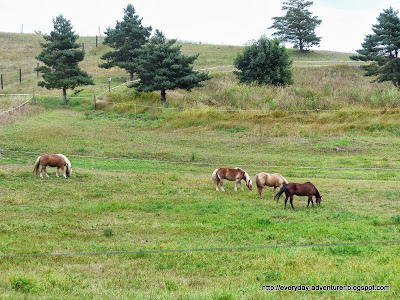 It's getting cold outside around here now. I sometimes wonder how animals like these horses handle the colder weather. I don't think they mind it as much as I do. I see cows, horses, and sheep out there doing just fine in colder weather than this.

I don't make it a big secret that I'm one of the few people who don't really like fall. This season kind of depresses me. I see everything from the warm weather months going away. I try to be more positive about it every year, but it doesn't seem to work.

I'm going to try to look for good things about fall once again this year. The color changing leaves. The big flocks of birds. Oh, I don't know, other stuff. I'm trying. I wish something would work to make me as happy about it as everyone else is. If you have any ideas, let me know. Talk to you later.
Posted by Ratty at 4:00 AM 12 comments:

Getting Closer To The Buffalo 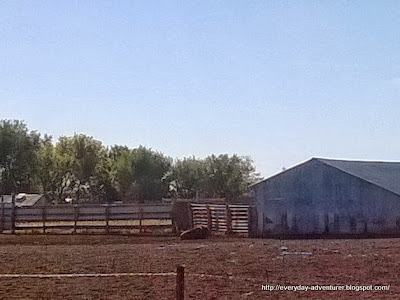 I've been driving by the buffalo farm as much as I can for the past little while. The other day I went past and actually found a buffalo out in the open this time! Unfortunately all I had with me was my phone camera. You can see the buffalo in the picture above if you look closely.

I've been back there a few times now, even a few times with my good camera, but so far there have been no other buffalo out there where I could see them. I've been told that they let them out there a lot, but I have yet to see that. 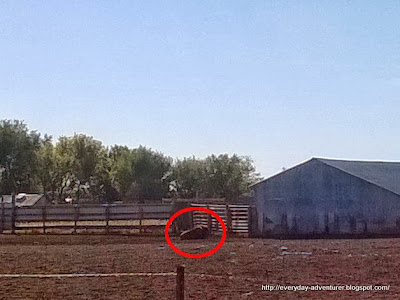 Just in case you couldn't see the buffalo in the first picture, I circled it here above so you could see it a little better. There it is taking a nap in front of the back fence. The first time I went by here the buffalo were all just on the other side of that fence.

I couldn't get any good pictures of them on that first trip because the fence was in the way. As for what they do with the buffaloes at this farm, I'd imagine they do the same thing other farms do with cows. Maybe buffalo burgers and buffalo steaks. I don't know. I don't try to think about that part too much. 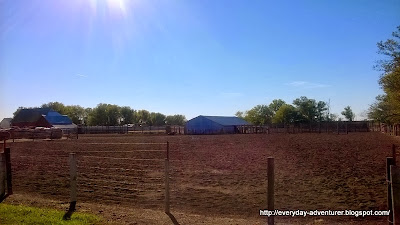 This last picture is what it looked like from where I was in my truck. The phone camera can only zoom in so much while keeping the picture clear. I think it did pretty good considering the distance and the fact that I was looking into the Sun.

Like I said before, I've still been going past there as  much as I can with my good camera. So I should have some better pictures one of these times. I've also been going past the place where they roam free and wild. One of these days I'll show you some buffaloes in their natural habitat.

I keep thinking that I should get some more pictures of wild turkeys. I see them several times a week right now. I wonder how they'd turn out with my phone camera. I guess I'll find out. Talk to you later.
Posted by Ratty at 4:00 AM 6 comments: 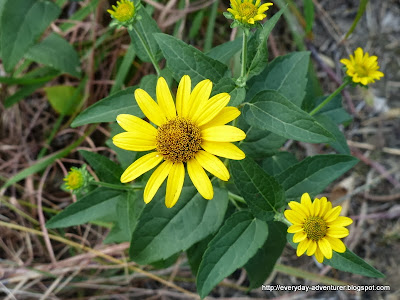 It's been a long couple of weeks for me. It started out with a little extra tiredness. I didn't think much of it at the time, but I was so tired that I thought it was a good idea to skip a few days of posting.

Then just about the time I thought maybe I should get moving again, I woke up the next morning and the old dizziness from the car accident came back in full force. So I've been battling with that and some nausea the whole time.

I decided to rest until it was gone all the way. I've done absolutely nothing for the past two weeks. But now I'm glad to say that I feel better and I'm finally back. I'm heading to the doctor in a few days just to make sure everything's fine now. 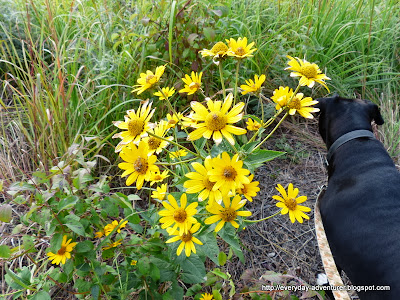 So I decided to bring you some pictures of flowers on my first post back. I couldn't help but add Isabella into a couple pictures as well. She just didn't want to get out of the way. Something in the weeds interested her a lot, but I never found out what it was.

These pictures are really about that very top one anyway. I just like the way it looks. I took these pictures a little before all of the weirdness happened to me. I'll have some new stuff as soon as I start getting back out again. That should start today. 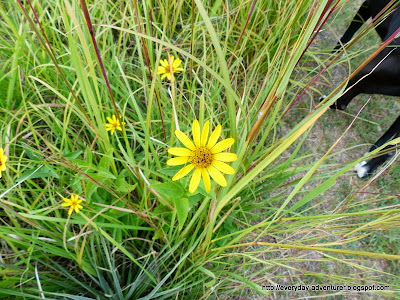 These are probably the last flowers of the year around here, so you won't be seeing any more from me for awhile. Maybe I'll share some of my flower pictures from this summer that I didn't have a chance to bring you though. I have some good ones left over.

And now that I know where to find the buffalo I'll be lurking around there for a few pictures if I can catch them while they're out. I've seen one now, but I didn't have a camera with me. it's not too far away so I'll maybe drive by there any time I'm out. Okay, that's enough for now. I'll talk to you later.
Posted by Ratty at 4:00 AM 18 comments:

I'll be back soon