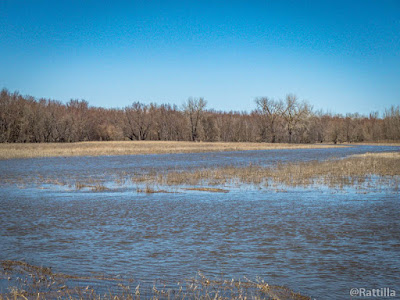 I told you a few posts ago, which is a few weeks ago I guess, that I would share an update when it begins to flood around here. Annnnd here it is!

It has now begun to flood here. It's not as bad as the flood from a few years ago so far. It could get worse though. So far the flooding is just limited to the area mostly near the river. 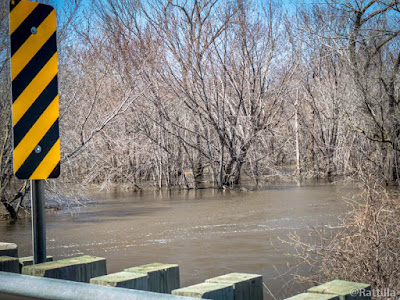 Last time the roads were closed in most directions due to the flooding. So far this time there are no closed roads. As a matter of fact, I took these pictures from the road that travels across the river over to South Dakota. You can see the sides of the bridge in some of the pictures. 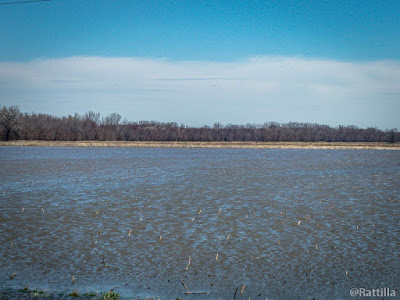 Most of this water I'm showing you is not in the river itself. The picture above is a cornfield that has been turned into a small lake. 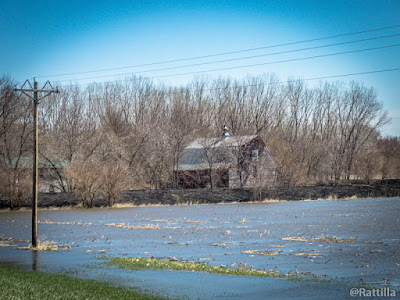 In the picture above, you can see some of the buildings of a small farm. It sits perilously close to the river. If you look closely, you can see that they've built up the land all around to protect from flooding. Everything surrounding the farm is under water. But the farm is still okay, for now. 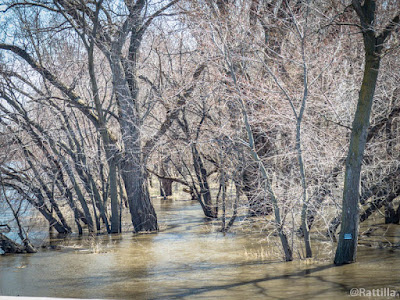 Trees all around are now under water. 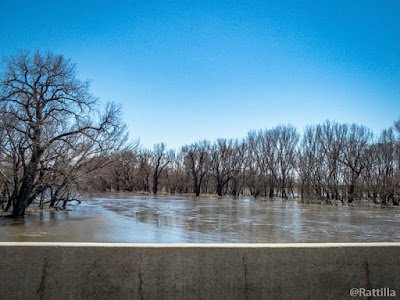 This one above shows the river up over its banks and going into the trees. I took this one from the bridge. 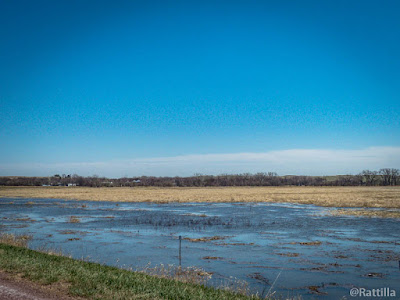 This last one is another cornfield. They won't be planting here this year. There will probably be lots of birds in the water here pretty soon. I'll have to lurk around here often if the flooding doesn't get too bad. I might get some very good wildlife photos.

So that's that. I've been extra busy around here now that spring has arrived. Lots of good stuff and lots of bad stuff. I might go into some of it next time. The flood was more interesting for this one. I'll keep you updated on that too. And until then, I'll talk to you later.
Posted by Ratty at 6:00 AM 7 comments:

The Scream of The Birds 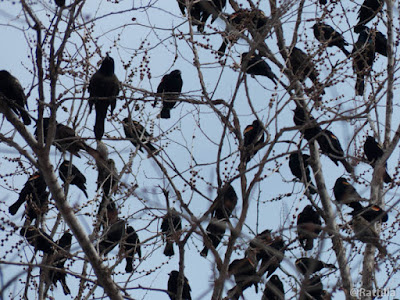 Yesterday I was sonically assaulted by blackbirds. Nothing like this has ever happened to me before, so I wasn't exactly prepared for it. I had to move fast. That's the only way I can say it in so few words, but there's more to the story, so let me tell you exactly what happened.

I was sitting there watching something terrible on TV when suddenly I heard a horribly loud high pitched screaming coming from outside. It could have been some kind of machine ready to explode or maybe a gigantic tea kettle going off, but I knew immediately that it was not either of those. It was birds, thousands of them.

It was the sound of very many birds singing, but I don't think I have ever heard so many of them at the same time. I looked out the window and I saw that every tree in town was covered with them. There must have been hundreds of thousands of them out there. I've never seen or heard so many birds in my life. My very first instinct was to run and grab my camera, which I did. 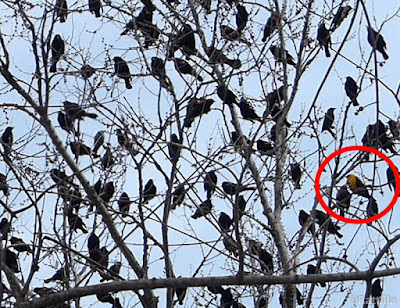 After I got back I began taking pictures. I didn't take many because I knew they'd all be too similar. And I also remembered to get some video, which interrupted my picture taking. I'm really glad I got the video because my pictures are terrible and they don't come anywhere close to showing the sheer number of birds.

But what kind of birds were these? After reviewing my pictures and video, I saw that they were blackbirds. I always thought that there would only be one kind of bird in a flock, but there were at least two different kinds of blackbird here.

Most of these birds were the standard Red-Winged Blackbirds that I've seen many times before. But as you can see in the circled area in the picture above, some had yellow heads. These are called, predictably, Yellow-Headed Blackbirds. I've never seen this kind before this. Pretty cool!

And now here's my video. I have to warn you before you watch this video that you will hear the loud scream of the birds when you click that button. So if you're in a place that needs quiet, then maybe you should wait until later to watch it. Even so, watch it now anyway, because it'll be more fun that way. So this is my newest episode of Rat TV. Let's see if you can watch the whole thing without turning the sound down. 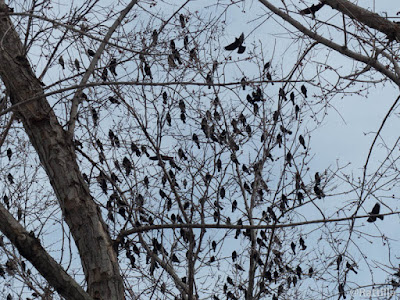 I included these last two pictures just to try to give you the best view I can. This one above has some of the birds in flight. I think that's cool in pictures. I'm not sure any of the pictures are what I was hoping for.

Maybe I should have processed the pictures a bit to give them a bit of zing. I could have brightened them up a bit or done something even cooler. But I was in kind of a hurry to share this post with you. So you get the raw version this time. Maybe I'll make a special post with one fixed up picture just to see what it might look like. Maybe. 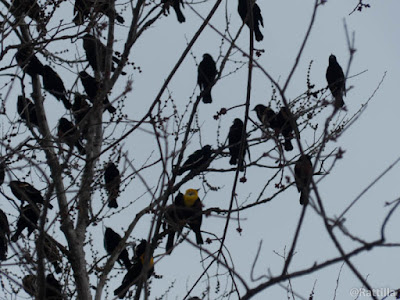 The darkness in the pictures is because it was a dark and wet day. We just had another blizzard the night before, and the temperatures were now too high for the snow to remain. It was still snowing while all the snow on the ground was melting away. I think spring may be finally here. (I keep saying that!)

This has been a longer post than I intended. I hope you were interested enough to be able to read it all. Even if you couldn't I'm glad you stopped by. And with that, I'll talk to you later!
Posted by Ratty at 6:00 AM 9 comments:

This Is How I See Deer 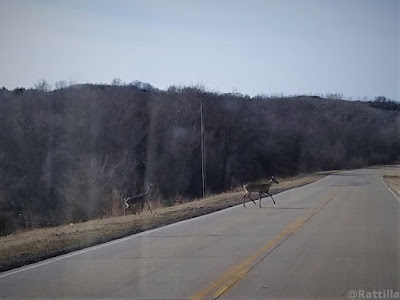 It took me a few minutes of fumbling with my phone camera, but I finally got these pictures of the last two deer in a herd of about eight. I wasn't going to bother, but it looked like I had lots of time to get the pictures.

I saw the first couple of deer crossing the road in the distance ahead, so I slowed down the truck and finally stopped so they could cross the road. As I sat there waiting I realized I should probably at least try to get some pictures.

This was actually the second big herd I saw along this road on this trip. This was the first one I had to stop for. When I finally got the camera working I got these last two. Usually, I get nothing, so I never try. But I see so many. 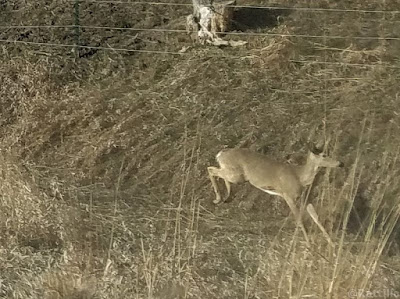 After running alongside the road after they crossed, the deer jumped over the fence and quickly disappeared. Even though I sat there for quite some time this time, the crossing deer usually disappear very quickly. And once they started it was no different this time.

I see so many animals here, but they are usually on these busy highways. This road doesn't look like much in my first picture, but the cars go very fast here and it is a very dangerous place. This is the road my old family farm is on, so I know it well. 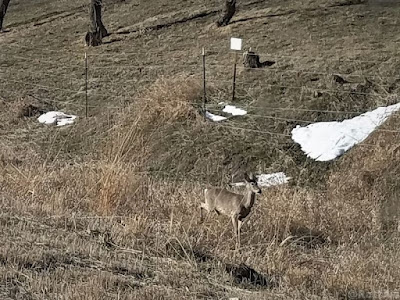 The road is curvy and full of hills, so you don't see other cars coming until they are right up on you. Stopping here is not the safest thing to do because the other cars like to drive way too fast here. It's been that way as long as I can remember, even before the road was paved.

For some reason, the animals only come out along the roads around here. I rarely see them anywhere but near these dangerous roads. This is why I don't get many pictures of them. This is not a safe place for animals or humans if you're not careful.

But any opportunity for some good(bad) animal pictures should be taken. So I took this chance. And I was able to share at least a couple of these deer with you. Hopefully, I'll have more chances this year. Now that it's warming up and the chaos of setting up my new business is winding down, maybe I'll begin to post more often again. We'll see.

Did You Think It Was Over? 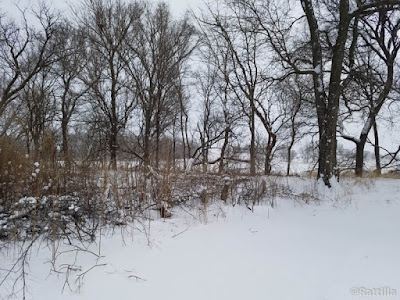 Did you think winter was over? Maybe it is over where you are, but winter doesn't seem to want to let go here. These scenes in my pictures are from two days ago right in the middle of another big snowstorm.

I was just getting ready to do a few things around here, but the snow stops me from executing my evil plans. "Evil," you ask? Well, if you call cutting down a bunch of trees evil, then my plans are as evil as can be.

I also came within a day of calling them out to bring me a truck full of gravel to spread around the front of my property. Now I think I'll wait until I'm sure winter is over as much as it can be. 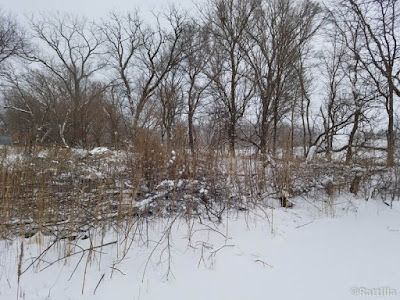 But there's good news! I think we will see the end of winter here in less than a week. The temperatures are getting ready to shoot up about twenty or thirty degrees in a few days. I don't think it will be able to snow anymore after that happens. We'll see if I'm right.

So while I'm waiting, I'm not really doing much nature stuff. I'm a little distracted anyway because my new business that I've mentioned in the past is going full swing right now. After months of setting things up, I've finally begun operations. This is the fun part. 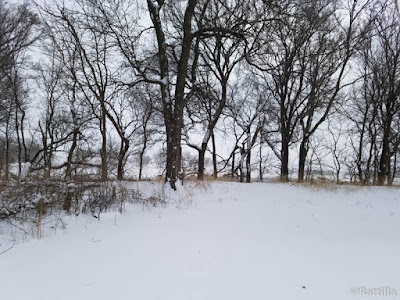 Even though the snow is kind of beautiful to look at, when you read this the snow should be mostly melted. It didn't last long. It's still pretty cold though. And I did at least get a few trees cut down before the snow started.

But I have even better news. As soon as it warms up the very nearby river should be just about ready to flood. It's almost over the banks now, but as soon as they release a bit of water from the dam up north several towns here will be flooded. Mine sits a little too high for water to get in here, but the roads will be blocked by water almost all around. The back way will be clear though.

I'll try to get some pictures of the high water as soon as I can. I have a few bad pictures ready, but I'll see if I can get some better ones. Then I'll get some even better ones if it does flood. Don't miss it. It should be interesting. I'll talk to you later.
Posted by Ratty at 6:00 AM 5 comments: