A Story Of Falling Snow 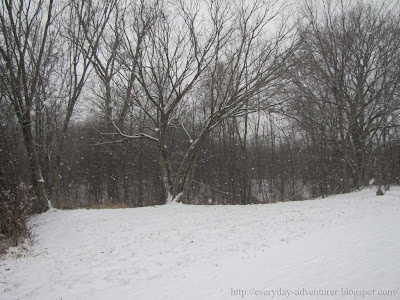 I'm gonna tell you a story. It's about falling snow. You could call it a big storm, but you might call it small. I got away without any harm, even though this one could have been quite a disaster for my poor unprotected camera. But many of you already know that.

It was already lightly snowing when I set out in my truck. The roads didn't have much snow on them, but there was enough that I figured this might be a good chance to find out how well the four wheel drive worked on my new truck. I really thought it wouldn't snow much longer.

But about a third of the way to my destination the snow began to fall much more heavily! The roads soon became covered in wet, slippery snow. But the truck performed even better than expected, which is much better than some of the cars around me did. The other cars made this a bit scary for me, but I wasn't about to turn back now. I wanted pictures of falling snow! And so I soon made it to my destination.

I began taking pictures soon after getting out of the truck at the nature park. But then I remembered my camera's handy dandy movie record button, so I pushed it with the intention of getting a nice little video of the falling snow. And that is what you see above, another episode of Rat TV!

It was at this quick point that I began to be concerned for my camera. I noticed that the snow was sticking to it a little too much. I had been out here in the falling snow before, so I hesitantly decided it would be fine. So I made my way for the walking trail. 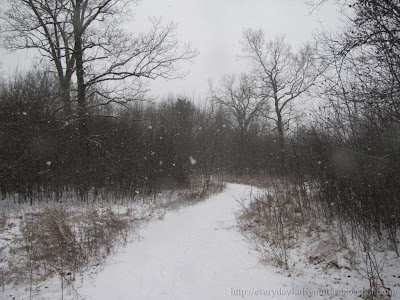 After walking only a short distance and taking only a few pictures I noticed that the snow was a little wetter than most other times. It was falling hard now and melting all over my camera. The camera was just soaked now. I tried to cover it up the best I could, but it wasn't working. There was snow even piling up in front of the lens.

So in the end I had to turn back around, get in my truck, and go right back home. It all turned out to be a short trip, but a good one. I got some of the pictures I was hoping for, even though I didn't get the chance to meet any animals out there. But I'll be back. And then I know I'll see something I've never seen before.


Nature Center Magazine - Your starting place for nature! Come get some.
Posted by Ratty at 3:03 AM 21 comments:

An Update, With Bugs 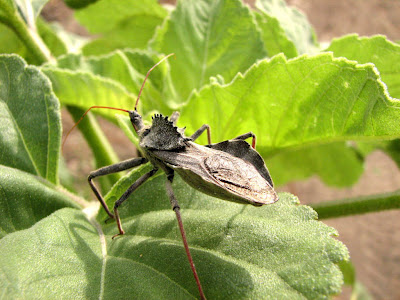 Hi everybody! I just wanted to give you a small update since I haven't been around too much since last week. I've been feeling a bit exhausted so I had to rest for a bit. I hope to have a more normal post up in a few days. I've been to my head doctor, but there's nothing new there. My MRI showed up as normal. But I have another doctor visit tomorrow.

What I really wanted to talk about this time is Nature Center Magazine. We have another new contributor today! The Bug Lady specializes in - wait for it - bugs! And her subject today is the wheel bug, like the one above. Go take a look at here article called "Wheels Aren't Just For Cars", then go check out her two excellent blogs.

One of those blogs has been featured in our Nature Site Of The Week, so you know it's good. Emma Springfield also has the second of her two part look at all of our past featured sites. You don't want to miss this handy link filled article of great nature sites. And the other good stuff we've done this week. 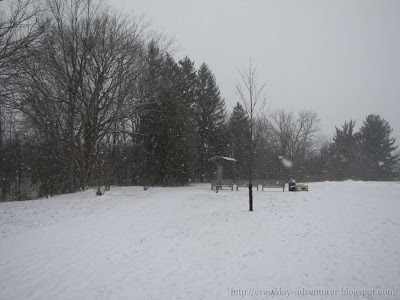 Oh, I almost forgot! I did get a chance to at least make an attempt to go on a hike. I got only to the front of the forest when I had to turn back around. It wasn't because of me though. It was the incredible amount of snowfall!

I forgot to bring anything to protect my camera, and the snow began right before I got to the park. I only walked a short distance before my camera was just covered in snow, including the lens. Out of pity for my poor little camera I turned and went back home. I did find out that the 4-wheel drive in my truck works fine though. That snow came down really fast!

I'll hopefully be back in a few days to tell you the full story, including video!


Nature Center Magazine - Your starting place for nature!
Posted by Ratty at 3:03 AM 16 comments: 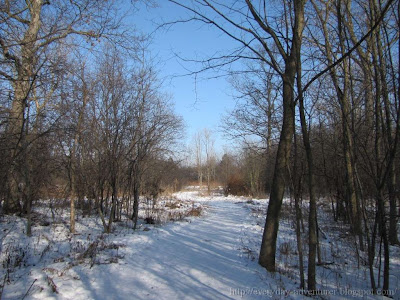 This will be a very short post. After feeling such enthusiasm for the past week, I must admit that I'm not feeling too well right now. Really, it's just a bit of exhaustion. I'm not trying to make anyone feel bad for me, or anything like that. It's just some more effects from my accident, and I know I'll probably be feeling better again in a few days after some rest. There are people that are much worse off than me. I just have to take it a little easy for now.

One thing I can do is passively read just a few things. What I wanted to tell you about is a post over at Nature Center Magazine by Emma Springfield. She wrote a post about all of our past Nature Sites Of The Week, and it is one of the best I've seen on the site. I just think you should give yourself a treat and go over and read it. And it has links to some of the best nature blogs on the web that you almost definitely will be interested in. I think the post will be a two parter to make it easy on you.

Maybe you can go over and read the article and then follow a few of the links. I created Nature Center Magazine with the intention to enable us all to meet new nature loving friends. This post gives us all the best opportunity yet. I feel very strongly about this. You can find the link below.

Now I think I'll go and lay down.

Nature Center Magazine - Your starting place for nature!
Posted by Ratty at 3:49 AM 18 comments: 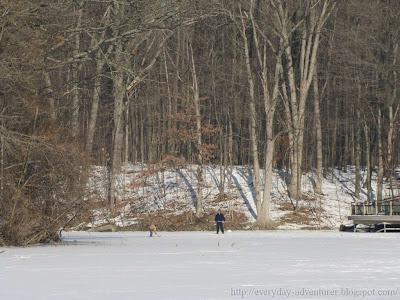 He's back, the man behind the mask! If I remember correctly, I promised a few pictures from my latest hike. Well, here they are! The only problem is that I think things have changed quite a bit since then. Everything got warm and all the snow melted. I would have been out there, but it rained almost the whole time.

But I had a different reason for these pictures I have here today. Look closely at the two animals out there on the ice. Yup, they're people. Some of you long time readers know I don't really like taking pictures of people, but I have a reason for it this time. Perspective.

You might have to click the pictures to really understand, but this man and boy show how big this forest out here really is. I've shown pictures of this spot many times before, but none have ever shown the huge size of this place like these do. Go ahead and compare all three and you might see what I mean. 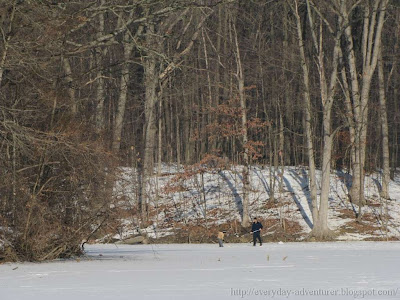 Before I continue, I want to mention to any of you who are interested that part two of my Demon Hunter horror fiction series is up at Rat Tales. It's titled "In The Mirror". This series will be a long one, and it's just beginning. I wasn't joking a couple of posts ago when I said writing this was literally giving me nightmares. I actually had to pause in the middle to take my mind off of it. Keep in mind that I know the full story. I'm really hoping that other people will eventually think this story is as good as I hope it will be.

Anyway, back to my little nature story. Humans prove to be even more skittish than most animals when they see a camera. Even though I was really kind of far away from them, these two must have detected the attention I was giving to them, because they decided to climb back up that hill behind them soon after I began taking pictures. The squirrels aren't usually any faster than they were. 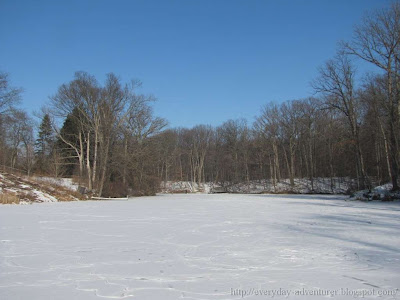 And here's a more usual picture of the lake. I've shown you this view many times from all seasons. If you click on this one you can see the two wild humans far in the background. I never zoomed in too close because I wanted to make sure their privacy was protected. Other animals don't usually seem to care so much about that. They just don't want to be eaten.


Nature Center Magazine - Ants love nothing better than to protect, groom and even raise aphids, scale bugs and bark lice. And why? They want the "milk" that they excrete which is called honeydew. Ants will also protect their new found friends, carrying them around in their jaws similar to a mother cat and her kittens.
Posted by Ratty at 3:15 AM 15 comments: