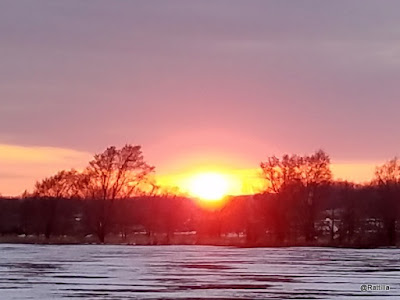 It's interesting to see the difference between what the eye sees and what the camera sees. When I looked at this sunset with my own eyes the Sun was a huge dark orange ball, much bigger than what you see here. The edges of this great orb were also more defined. It didn't give nearly the obscure glow that the camera sees.

I think the pictures I took are just fine, but I liked what my eyes saw much better. This isn't the most remarkable sunset you'll ever see, and it's also not the best I've seen, but all sunsets are nice to look at. It's unique to me because it's the first one I've gotten pictures of when there was snow on the ground.

Growing up in the city for most of my life I never really got to see any good sunsets. There were always buildings of some kind in the way. Because of this getting a picture of a sunset, any sunset was always a major goal of mine. So while these may not seem to be very spectacular pictures to anybody else, they are the fulfillment of a lifelong dream for me. 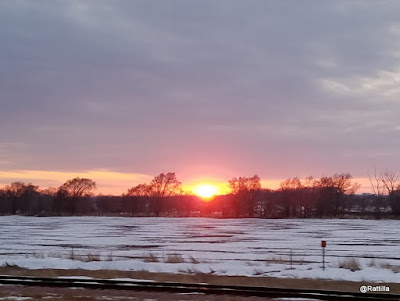 We all have dreams that maybe don't seem special to others, or maybe they do in some cases, but it can be the greatest feeling when we can realize those dreams. Some of my dreams are big and some are small. I'd like to see an owl for myself one day. I've never seen one except in video or pictures. I'd also like to be a billionaire. One of these two is a little easier to do than the other for me. I'm not sure which one.

Today I'm just happy that I got a few sunset pictures. Sure I've gotten sunset pictures before. But now it seems like a big thing every time I get another. There are lots of things in nature that are like that for me. In that way I'm delighted every time I go outside. Nature is such a wonderful thing. I'll talk to you later.
Posted by Ratty at 6:00 AM 9 comments:

Alice And The Frozen Dragons

I want to take you back some years to one of my more popular adventures with my old friend Alice who has now gone off to Wonderland to have exciting adventures of her own. I still hear from her now and then about some of the fun things she's doing now, but those are stories for her to tell. 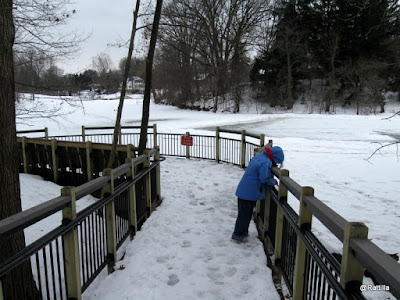 What is it that Alice is staring at? While I was walking down the new walkway, I saw her looking at something off to the side of the railing. I wondered if she spotted a duck or something walking around down there.

She seemed pretty interested in what it was because when I asked her she didn't seem to hear me for a second. I asked her again and she said to come and take a look. I wasn't sure what I would find because she has a habit of dragging parts of Wonderland along with her on our trips.

As I got closer, I noticed something big and dark down there. It wasn't moving so I knew I needed to find out what was going on. We had not seen any animals out here yet, so I didn't think it was anything that might be alive. 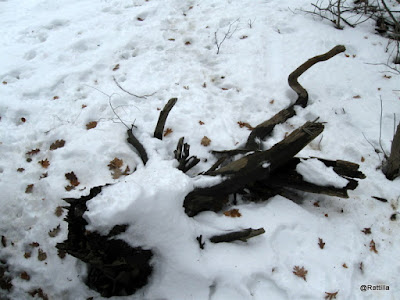 When I got there all I saw were these broken tree branches that were half submerged in the ice of the lake. For some reason they looked strangely familiar though. I couldn't figure it out, and I didn't know why Alice was so interested in them.

She said that winter is a bad time for them. I asked her what she was talking about. She said that some of the dragons didn't like the cold, and they easily froze to death unless they found shelter. I told her that it was only a piece of wood.

She said that wood was what dragons turned into when they died. She said that this one must have been swimming around in the lake when it froze. Now it is stuck there forever, but none of the rest of us know that this wood used to be a dragon. 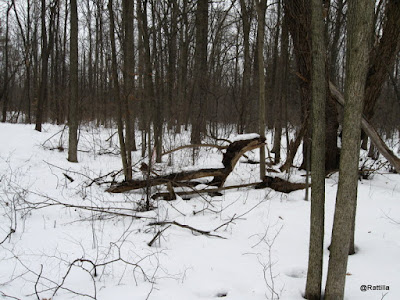 Here's another poor unfortunate dragon that peaked up out of it's den at the wrong time. Alice spotted this one right away too. She walked over to check on it, and said that it was now turned into wood too.

I asked her if she knew why they turned into wood. She looked at me as if I were stupid and said, "Because they're dead." I thought right then that I should go get the Red Queen after her. That would teach her a lesson.

Instead, I asked again, why is it wood that they turn into when they die? Then she finally explained that it was because they dried out and became petrified. That was also the reason why we never find any dead dragons lying around.

I guess that answered that question. Now we all know what happens to dragons when they die, right from the thoughts of Alice. I wonder if she'll see any other interesting creatures on our next trip together.
Posted by Ratty at 6:00 AM 7 comments:

Even Cooler Than Last Time I've not been quite as quick to post this one as I'd hoped, but here it finally is. Anyway, last time I said I'd try to get some cooler pictures for this next post. And here they are! You can't get much cooler than snow, snow, and more snow. You're looking at about ten inches of the white stuff in these pictures.

Just before this snowstorm I was thinking about how lucky I was that we haven't had much snow around here yet. There were some bricks out at the back of my property that I had been planning on collecting for a little project. But that's all going to have to wait now until the snow melts. The waiting is the hardest part.

So now I'm going to have to figure out what I'm going to do until then. Snow just doesn't melt overnight you know. I considered fishing around in the snow for those bricks, but I don't think that's really going to work well. I guess I'll just have to do something else. 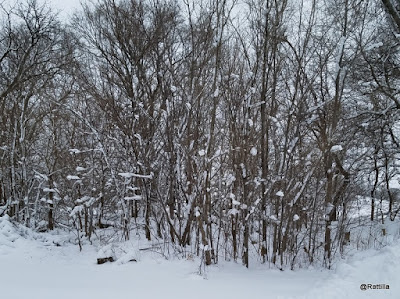 The dog really likes playing in the snow. I could stand out there throwing snowballs at her. That's actually one of her favorite games. I'd post the pictures of that, but I already did that my first year here.

My dog used to really enjoy being in front of the camera. I'd point it at her and she'd come running. Now she makes a point of looking away. It's as if she knows or something. I really do think she's upset at being denied that million dollars she begged for a few years ago. You'll have to search the blog to find out about that little incident. 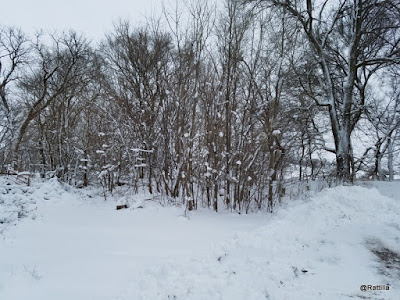 So why am I talking about goofy dog stuff? Because, as you can see, there's a ton of snow out there and not much else to do. I got some cool winter pictures though. And when the snow melts there's nothing but mud between the house and the garage. I'd get some gravel to put on the path, but I can't find out where to get any. My dad would have known.

Maybe you can tell by what I have written that I'm feeling a little stir crazy right now. I do have to admit that I'd really rather be out on one of my everyday adventures. My brother sent me a bunch of cool deer pictures on my phone recently. Even he's doing better than me right now. Time to make some big plans. I'll talk to you later.
Posted by Ratty at 6:00 AM 12 comments: