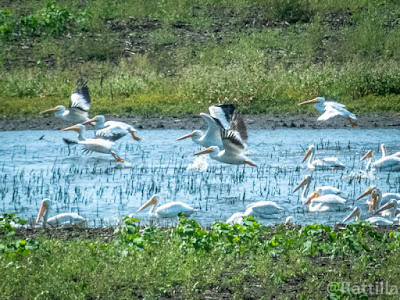 I've told you many times in the past about the local river flooding every few years here. A flood is usually a very bad thing, especially when it's as bad as this has been. There are corn and soybean fields near the river that are usually devastated. But I haven't revealed a good result of the floods, until now.

Months after the flooding we are left with huge areas of wetlands right in the middle of the cornfields. What looks like lakes, ponds, rivers, and just general wet areas are distributed all through these places. These wetlands, as you have guessed, bring lots of wildlife. 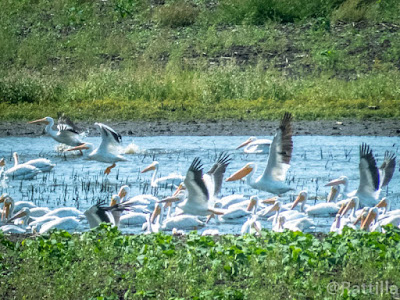 I see all of this from the dangerous highway that borders these places, so I can't usually stop and get pictures. This time I had to take the risk of getting killed by a speeding vehicle to get a few pictures. I won't soon do it again just for normal safety reasons. But let's move on with this story.

I've seen many kinds of wildlife in these wetlands over the years. Deer like to go here to get water. You have to be careful when they're crossing the road. There have been small flocks of geese relaxing in this water at times. This hasn't been unusual enough for me to take the chance to stop though. 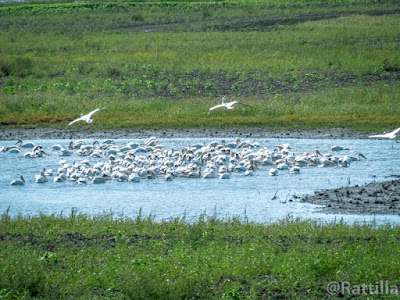 Then I also see egrets in a few places here and there. There are usually only a few at a time, but the first time I saw them I was tempted to stop. The first time I slowed down though, they decided to all fly away. I think I even shared a few pictures of them once before.

But then this time I saw what looked like flocks of hundreds of these egrets scattered around. I had to go back home and get my camera. I had to take a chance this time. This many birds was unusual. So I came back, and after having to wait for quite some time for traffic to lighten up, I stopped and took lots of pictures. 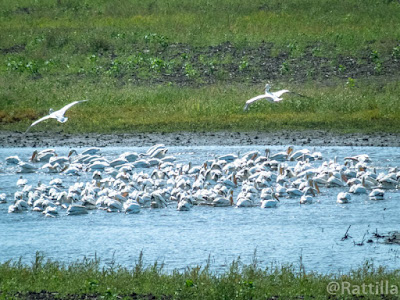 When I finally got to see these birds up close, they were not egrets at all. They were pelicans! I've never seen this many pelicans before in my life. And would you expect to see huge flocks of pelicans in an Iowa cornfield?

I took the pictures a few days ago. The pelicans are still hanging around a bit. Yesterday I saw the unmistakable shape of a pelican flying above my truck. I don't know what anyone else around here thinks of them, but pelicans area welcome sight to me. I'll talk to you later.
Posted by Ratty at 6:00 AM 8 comments: 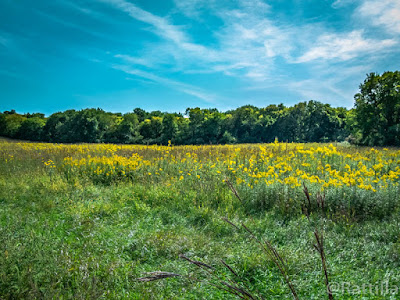 Are you still there? It's been a long time that I've been gone this time, but I'm back and I have some new stuff to share. I finally got my computer situation taken care of. It was really even worse than I have been describing. I keep two computers for personal use. Both of them went down around the same time.

My laptop just got old and too slow to be functional. It had become mostly unusable, but I didn't want to part with it so I kept trying. I finally replaced it with a brand new Dell laptop. The new one is a pleasure to use. I don't usually do my blogging with this one, but at least I can do it now if I want to. 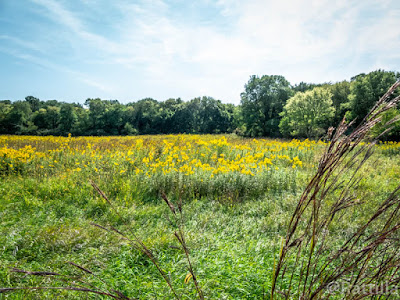 I keep my main desktop computer in my bedroom. I built it myself and it's also getting old. The only original part is the case. I replace parts when needed. This time I waited too long and it caused most of my problems.

The last piece I had to replace this time was the main hard drive. I chose a solid state drive (SSD) this time. It makes a huge difference. The way the computer was limping along before, it took about 20 minutes to come back up when I restarted it. So I tried not to do that very often. Now with the new drive, a restart is almost instantaneous. I recommend SSDs to anyone who uses a computer. 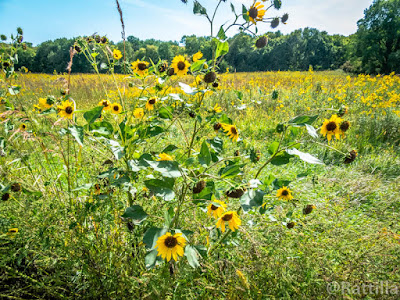 I do almost all of my blogging on my bedroom computer. I'm only in that room at night, so I do other things during the day. I limit the things I do to certain times to keep my many individual activities from dominating my time. I need enough time for each thing. I mostly work all day for a long time, so I have to budget my time carefully when I'm done. I spend my days off trying to get more pictures.

I've been out getting a few pictures to share. Some are amazing and some are not so amazing. I only really judge how good they are by the experience and adventure I had while taking them. The pictures are just a record of the experience. A good nature adventure is what's really important.

The pictures today are some of the random scenes I've seen in the past several days. I have pictures from some really fun adventures coming up soon, as soon as I can get the time to write about them for you. I hope to have lots of stuff very soon. I'll talk to you later.
Posted by Ratty at 6:00 AM 10 comments:

As you have been seeing, I'm not here right now. I ordered a new computer and it's on its way. I thought it should take a few days to arrive, but I'll be waiting for another week. I chose Dell this time instead of just building one. They don't seem to be speedy.

While I'm waiting, I'll visit your sights whenever I can with a combination of my phone and my business computer. The phone is hard and I don't have much time on the business computer for anything other than work.

Maybe I'll get lucky and the new computer will get here sooner than expected. Hopefully, I'll talk to you soon.
Posted by Ratty at 10:25 AM 4 comments: