Do You Wanna See Some Buffalo? 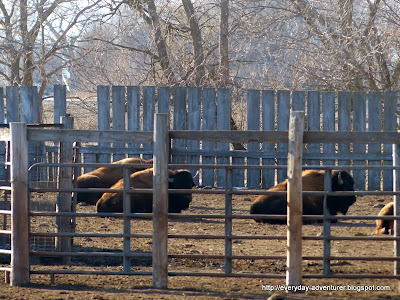 I knew that I'd eventually get them. I've been driving past this buffalo farm so many times, but this is the first time I've been able to get a halfway clear view of the buffalo. Obviously there's not much room for them to roam so they don't ever really seem to be standing when I see them.

I have to say that these aren't the big prize I've been waiting for. I'm still watching for the wild buffalo that are free at Broken Kettle Grasslands. The buffalo here are more like cattle. They are being raised on this farm for reasons we don't need to think about too much. 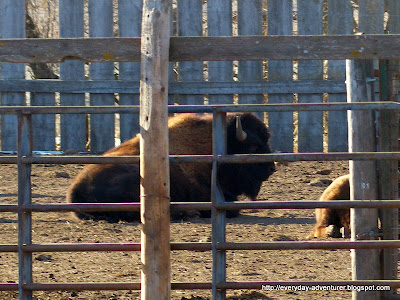 The good thing right now is that I've finally gotten my first good buffalo pictures. So they're taken through a fence. So what? I'll still go back often hoping to find them at the front of the farm and walking around.

The times I've been here with them up and walking I couldn't get any pictures. I just couldn't see them well enough through the fence. I'm not that close when I get the pictures, so I have to rely on my zoom lens to help me with this stuff. 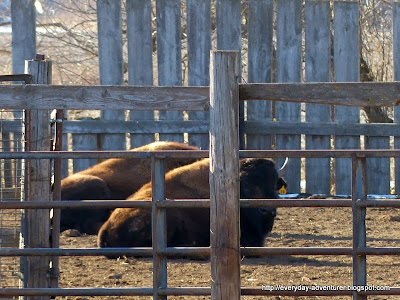 I'm getting ready to go out and do a bit more traveling again. Everything I've been doing for awhile has kept me kind of local and at off hours so I haven't been able to go on any good adventures, but that's about to change now. I hope to be able to see some new things and even revisit some things I've seen before.

That all means I think I'll have some good sources of pictures again. Getting pictures has been the tough part for the past month or so for me, so my posting has slowed down. That all should change now. These buffalo are only a beginning. I like it so much better when I can go out on a few good adventures here and there. I'll talk to you later.
Posted by Ratty at 4:00 AM 9 comments: 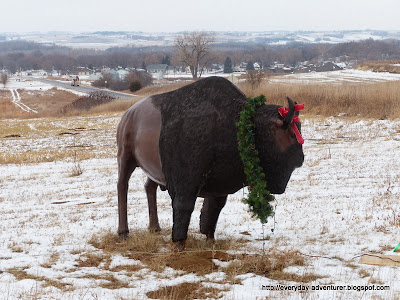 What you are looking at in the picture above is a buffalo statue just outside the town north of mine. He appears to be all dressed up for Christmas. I took the picture a few days before then. He was a pretty easy target since he didn't move at all and even let me get right up close.

How do I know that he's a he? Take a very close look at him. It's interesting that they would put that little detail on a statue. I guess they have to do it right. I'd probably do the same if I made the statue. I'd leave off the Christmas decorations though so that random photographers could get better pictures.

I wanted to do this post a few days earlier but then Christmas got so close that I figured it might be better to take a few days off. I had a pretty good Christmas, so it was all worth it. I hope you did too. The next post won't take so long. I have some good stuff coming. I'll talk to you later.
Posted by Ratty at 4:00 AM 10 comments:

I Can See Them In The Dark 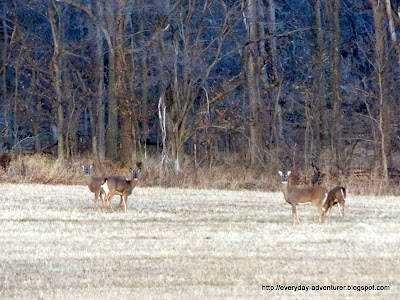 Welcome to this rare weekend edition of The Everyday Adventurer! I don't know for sure, but I may post more often on the weekend again if this post feels good for me. I said before that my posting would be a little more unpredictable. This is where it starts.

I've been telling you that I have only been seeing deer when it gets dark around here. That hasn't changed. But I decided to do something about it. My new camera has all kinds of capabilities that I haven't tried out, so I thought I'd try a few night shots.

I saw these deer just after the Sun went down, so I wasn't sure what might happen when I took their pictures. I set the camera on the Night Scenery setting and the pictures came out looking as if they were there in the daytime. I was surprised I got anything at all. My last camera would have only gotten a bunch of dark blurs. 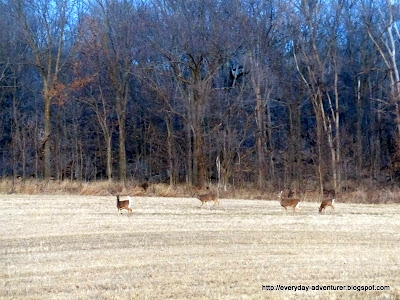 This is just a small herd of about four. It's actually kind of typical, but I also see them much larger. Much of the time there are several groups like this scattered around the same field. It was still a little early, so these four were alone. I wish I would have thought to take some closer shots, but the deer ran away too soon when they saw me.

I have a little more time on my hands so I hope to be able to post more often again. I've had a little trouble getting some pictures because the innards of my trucks side window broke because of the cold weather. Now the window is stuck shut. I have to take it in and get it fixed now. They're going to keep it for about a week.

I liked rolling down the window and taking some pictures right from the truck. Now I have to get out to do it. Animals that seem okay with a noisy automobile coming near them don't really like it when I get out to try to get pictures. These deer were no exception. Getting out of the truck can be good too though. I need the exercise. I'll talk to you later. 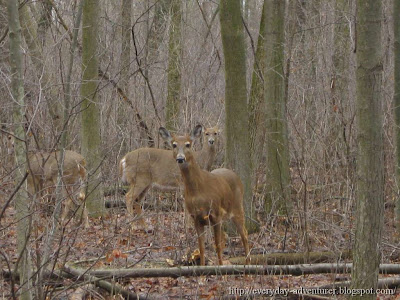 I keep finding myself away from this blog for too long. I haven't really been able to get any pictures for awhile because I've been away during all the daylight hours. So I haven't had anything to post. By the time I get home I've been too tired to get on here so I just had to put things on hold until I got time to do things.

Now I'm finally getting some time back to start doing this again but I don't have any pictures yet. My solution to that is I'll use some old pictures for this post. I'll have some more new pictures in a few days. It's good to have the time to do all of this again. 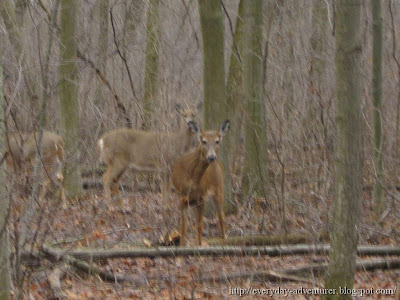 On my way home every night I've been seeing deer in the fields for miles and miles. It's not odd for me to see about fifty deer in one night. That's really fascinating, but that's where a little problem begins. The deer come out right at the time it gets dark and I'm only there when it's getting dark. That makes it impossible to get pictures.

My solution to this is to use these old pictures for this post. I think this was the biggest herd of deer I saw about four or five years ago. There were about six deer. The herds I've been seeing now can reach about a dozen sometimes. It's really amazing. I only wish they'd come out in the daytime. I guess that'd make all the hunters happy too. 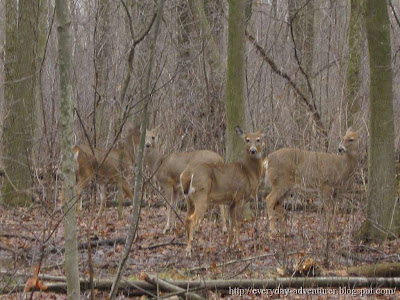 It's not only deer that I've been seeing when it's too dark. Just yesterday I went past a place where I saw several trees that were just full of turkey vultures. The light was a little better at the time but I only had my phone camera with me. That would have never worked out well. I thought the turkey vultures were elsewhere this time of year. It's possible I was seeing something else.

I'm going to spend the next couple of days catching up on my blog reading. I usually do that before I write a post, but I wanted to finally get this one out. I'll hopefully see some of you here in the comments section or I'll be reading your blogs. Until then, I'll talk to you later.
Posted by Ratty at 4:00 AM 16 comments: 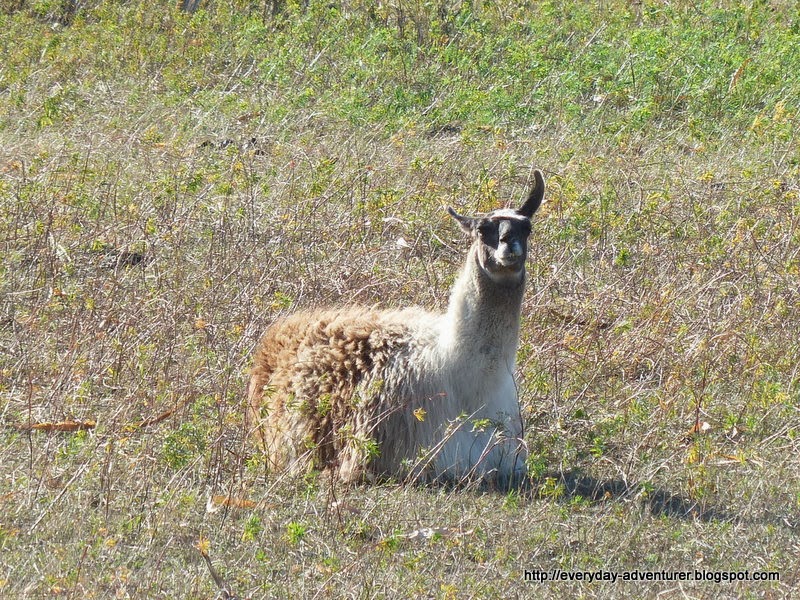 I took a little time off for Thanksgiving, and now I'm having trouble getting going on here again. That always happens when I take any time off. I wish I knew why.  I wanted to write this post for yesterday but I simply forgot to do it. I keep forgetting how good it feels to write my posts until I begin writing again.

Anyway, I was out exploring the countryside when I found a farm that had these llamas there. I think this is every bit as good as a buffalo sighting. Don't you think? I've heard of people keeping llamas here in the United States, but this is the first time I've seen any. I wonder why they do it. 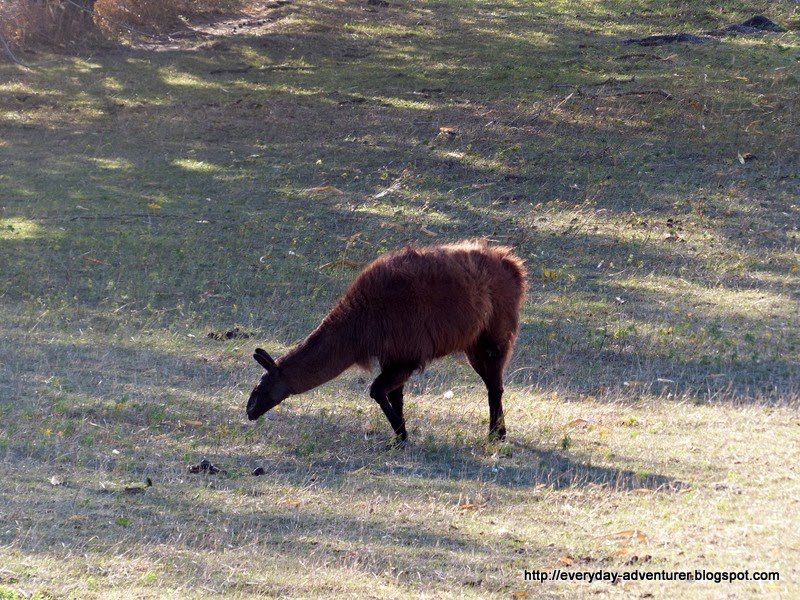 I couldn't take very many pictures because I was stopped in the middle of the road when I got these. I ended up having to move along when another car came up behind me. I actually took many more than these two but the others were just variations on these. That's usually how I do it.

I'm so far behind with everything I don't know what to do. Even though there are plenty of good things around here, I don't get many pictures each time I go out. This last time it was only these. My problem is that I usually get started kind of late in the day and it gets dark too soon. One of these days I'll get started at a proper time.