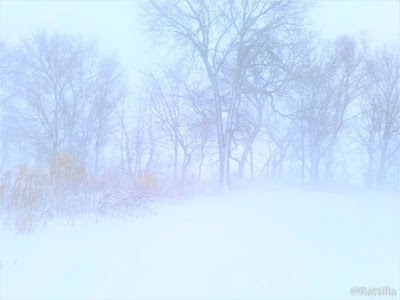 It took me long enough to finally come back, but this day we had a huge blizzard was pretty much my only opportunity since my last post to get any pictures. After I thought the deep freeze was over it came right back. It wasn't quite as cold as before, but it was still too cold to go out.

So after several other unrelated misadventures, the weather finally began to improve. Just when I thought I'd head back out to a nature park for a nice winter hike, there was news that we had a terrible blizzard coming. That was the end of my plans.

So on the day of the blizzard, I decided to take a few pictures in spite of this big storm. I had to use my phone to take the pictures because my big camera isn't water resistant. The phone is. I made sure the flash was on so I could capture the falling snowflakes. I didn't anticipate what really happened. 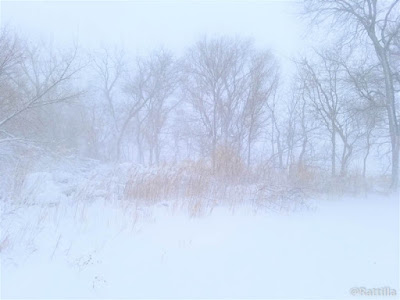 The snow was coming down so much and the wind was blowing so hard that I couldn't see individual snowflakes, and neither could my camera. What you see in the pictures is exactly what I was seeing while I was out there. It wasn't good at all.

I had the wind at my back while I took the pictures, but I had to turn around to get back to the house. If things would have been even a little worse I could have gotten lost just this short distance from my house. Needless to say, I only took a few pictures before I went back inside.

It's now been a few days since this blizzard, but they're just now opening all of the official places, like schools and the nearby freeway, back up. It takes a lot to close down these places here in Iowa. The snow is too deep at the nature parks to go hiking so I'll have to think up something else for my next posts. Luckily it's not going to get very cold again, so maybe the snow will melt quickly. So that's my news for now. I'll talk to you later.
Posted by Ratty at 6:00 AM 9 comments: 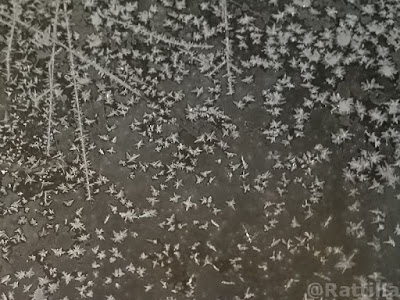 Problems problems. This new year is kicking off with a bang for me. We've been down in the deep freeze around here with record low temperatures. For several days the average temperatures were around -20 Fahrenheit (-29 Celsius). And right in the middle of it all, my computer's hard drive died.

Because of the deep freeze I haven't been able to go out and get any new nature pictures for a new post. So I've just been sitting here waiting for it to get above zero degrees so I can even pretend it's safe to go out for long periods.

And when my hard drive died it took a lot of my important stuff along with it. I had backups for some of it and some things are lost forever. Right now I can't do much of anything until the new hard drive I ordered gets here. 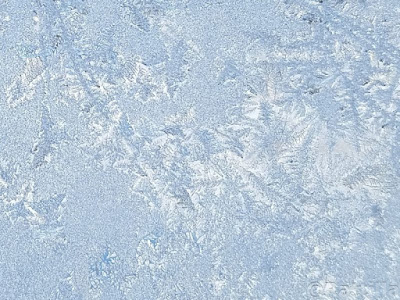 But now the temperatures are beginning to rise just above zero so I'll be able to go back out to my precious nature trails. And my hard drive should be arriving today sometime. So I'll be back up and running(walking) soon.

Until I get everything in order I thought you might enjoy a couple of these pictures I took of my front door window. As you might have guessed by now, this is clearly a frosted over window. I'm sure I didn't have to tell you that part.

The last time I took pictures like this was when I first moved here. They're not much, but they might be better than pictures of my fat old gassy dog. The dog pictures might be fine, but just feel lucky you don't have smellevision. Anyway, these are my super-fantastic pictures for today. I'll talk to you later.
Posted by Ratty at 6:00 AM 7 comments: