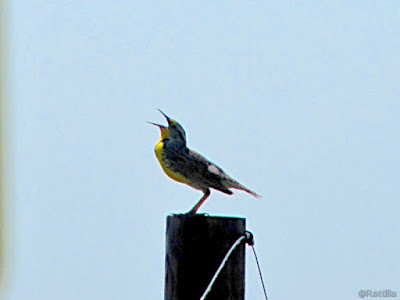 I've been a little slow with my posting recently. I just haven't had much to say or do. That's gonna change pretty soon, and I'm kind of excited about that. I still have some good stuff to show you right now though. None of my pictures today are exactly new, but they're all from the month of April.

I knew what this bird above was at one time, but I'm just too lazy right now to find out again. the real point is that it's kind of nice to look at. I really like the yellow. The darkness on the left edge of the picture is the edge of a sign post. 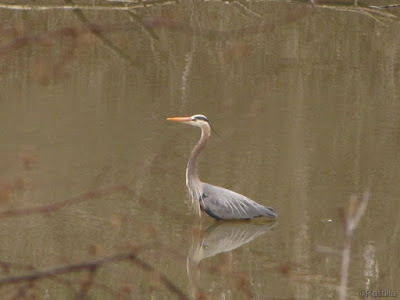 I used to see lots of these Great Blue Herons. I still see similar birds from time to time, but I don't get a chance to vist ponds very much. 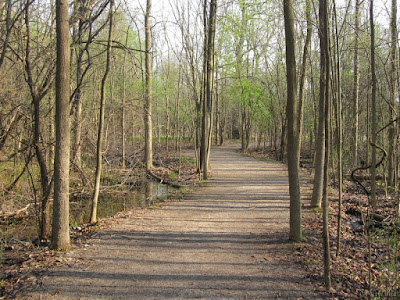 One of my favorite old nature trails. This place was made for city people who want to enjoy a bit of nature. It does its job just perfectly. 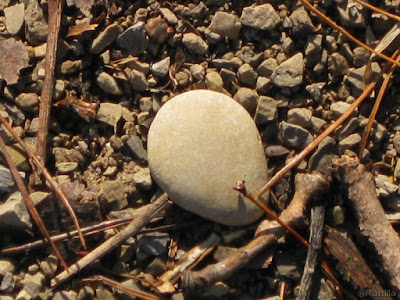 A nice rock I found. usually when you find a good rock you pick it up and put it in your pocket. I never did. I thought it was best just to leave everything right where it is. 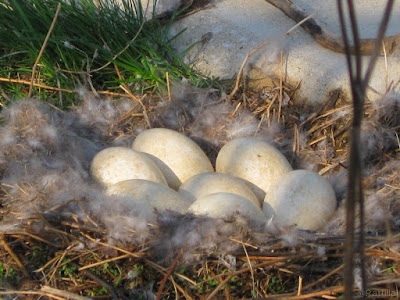 The geese that hatched out of these eggs used to come to me when I called them. 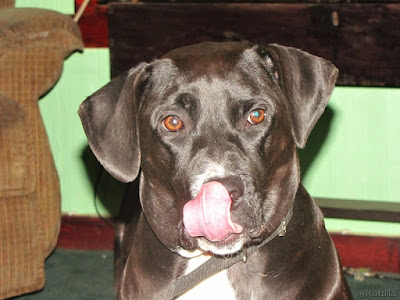 This is Isabella. She has a bit of a bad back now, just like I do. It keeps both of us off the nature trails right now. Isabella probably will only get to go for short distances from now on. But I think I've finally found the solution for my bad back. Yard work.

After years of trying every exercise I could find and constantly complaining to the doctor, I think I finally figured it out. It was as simple as raking my yard. Doing that one activity seems to have worked the exact muscles that I needed. I've just started, but I'm really convinced that this one thing can get me better.

So now, even though I can't take my dog with me, I'm going to be back to exploring nature just like I always have before. I think that will also rekindle my excitement for all things about nature. There's so much to explore around here. I hope to get out there again soon. I'll talk to you later.
Posted by Ratty at 6:00 AM 9 comments: 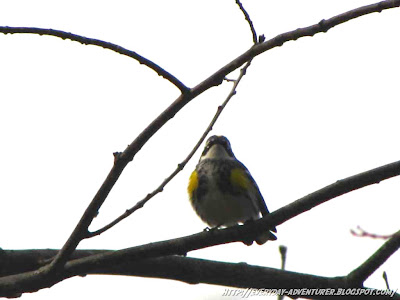 Today I decided to show you some random nature stuff I found. This is a very good thing because I originally planned on making each of these an individual post. Instead, I'm going to take the lazy way out and give it all to you in one shot. And I think you'll like that.

The bird you see above is called a Myrtle Warbler. It's not the best picture of it, but it's the only one I have. And this is the only time I ever saw one of these birds. I didn't know what this bird was for awhile. And a search turned up nothing. Finally, my blogging friend Sharkbytes identified it for me. You can find a better picture she took here. 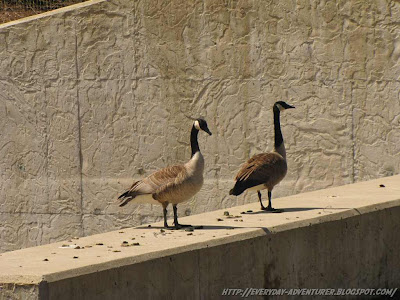 So why am I bringing you these geese? They are just two geese standing on top of Carpenter Lake Dam in Michigan. Well, What we have here are geese doing what geese do best. These poop machines are showing why so many people dislike them wherever they go.

I still like them though because rain always cleans the dam and they don't fill that nature park too much with their droppings. My friends the geese. They love what they do. 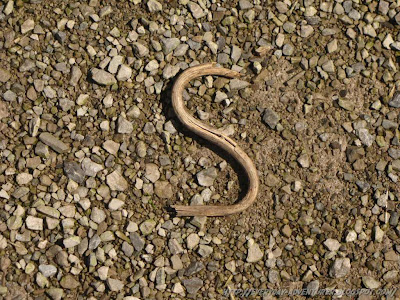 S is for snake. But after about one-tenth of a second, I knew this was not. What it is is a twig that looks like an S. So S is really for Sharkbytes because it was her that first looked for letters in nature, and now I do it too when I see something even close. I've been giving Sharkbytes lots of credit today so visit her blog when you're done here. 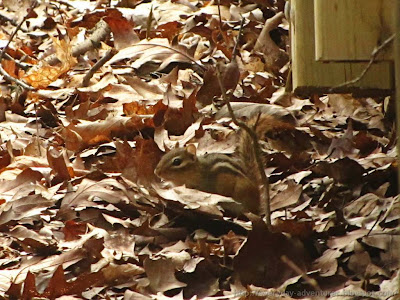 My last little prize for you today is this beautiful little chipmunk. I haven't seen a chipmunk in a long time. I don't think we have them around here. But when I did see them this little fella thought he could hide from me. But no little critter can long evade the watchful gaze of an Everyday Adventurer.

I tried to add one more picture for you, but blogger just wasn't cooperating anymore, so I guess it's time to stop. That's about as random as it gets. I'll talk to you later.
Posted by Ratty at 6:10 AM 11 comments: 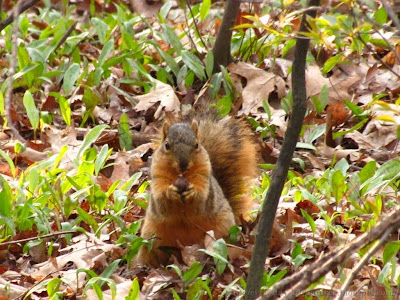 I've had comments over the years wondering what behavioral differences I've noticed in the different types of squirrels I've encountered. Most of these comments are from several years ago when I saw lots of squirrels running around out there. I had become somewhat of an authority on squirrels. It's too hard to just give my thoughts on these fun little critters as short answers in the comments section, so I decided to write a post about this very subject of squirrel behavior.

The first thing I want to say about it is that these are my own personal observations about squirrels in my old area in Michigan. It may be different for other squirrels in other places and environments, even though they seem about the same here in Iowa. The squirrels I encounter are all forest dwellers, so they're a little wilder than a typical neighborhood squirrel. So let's see what I've noticed about each of them!

I'll start with the fox squirrels. These are the most abundant squirrels in my area. I grew up with them in my neighborhoods, and they were also there in the forests I visited. I think the fox squirrels are the most outgoing of all the squirrels I've seen. They're not afraid to approach a human. And they will even seem to try to interact with me a little bit when they are brave enough to come close.

They seem very friendly, but they are feisty too so they can have a temper. They're not at all afraid to show their anger at a person, chattering away as if they're yelling angrily at you. They're also not quick to run away. They are perfectly willing to challenge any human if they feel the need. 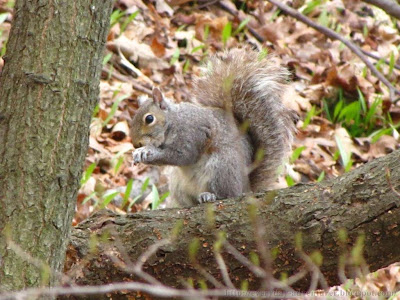 The picture above is an eastern gray squirrel. I don't have much experience with them because they're not as common where I've been as they are other places. For that reason, I wrote a post some years back mistaking this one for a fox squirrel. That white eye ring gives it away as a gray though.

I soon began to see more of these gray squirrels. They seem a little more afraid of humans than the fox squirrels. That may be because they were not as numerous there as the fox squirrels are. I usually only caught glimpses of them in the thick bushes and trees. When they came out, they maintained a distance from me. The picture above is the best one for these grays that I have so far. He ran away soon after. 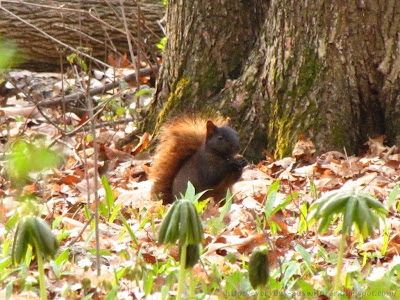 This next squirrel above is the mysterious black squirrel. His tail looks reddish because the sun is shining brightly from behind him.  These are actually just gray squirrels with black fur. They keep in tight-knit groups, but around my old forest they are numerous. I seem to have lived in the middle of one very large population of black squirrels. Not many people can say that.

Black squirrels there in the forest were very wary of humans. I almost never saw them up close. The ones I saw in my neighborhood were a little more outgoing. The forest blacks behave very similarly to the grays. The only difference is that there are too many black squirrels to stay hidden for long. They don't like to approach humans, and they run away to hide if they would see me watching them, even from a distance. These squirrels don't like to be alone though. Usually, if I see one black squirrel, there are more very near. 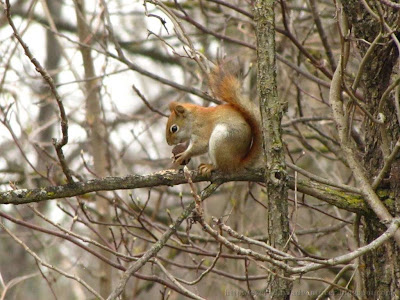 And lastly, there is the American red squirrel. These are the cutest squirrels I've ever seen. They are smaller than all the rest here. The fox squirrel being the largest is at least twice as big, while the grays and blacks are not quite as big as the foxes. I consider these reds to be the most intriguing little squirrels of all.

Red squirrels seem to be very solitary little creatures. I never see more than one at a time. All the others can be found together in groups at times. These reds also seem to be the most curious. They scare very easily though. They will run and hide, but soon you will see the squirrel pop its head out to look at you. Sometimes they will even come back to get a look before scurrying off again. This behavior seems to match chipmunks more than the other types of squirrel.

The only other type of squirrel I've heard of in places where I've lived is the flying squirrel. I have never seen one of them because they are nocturnal. One of those would be a wonderful sight to see though. Wouldn't it be great to see a squirrel gliding through the air?

This is my general observation on the species of squirrels I've encountered. I'm sure I could come up with more, but this probably covers it the best in blogging length. And like I said before, their behavior may be radically different where you live. Different environments can influence any animal's behavior. How do the squirrels behave where you live?

Thanks to everyone who has ever asked about squirrels. Those comments have always been much appreciated. I'll leave you today with a photo of a very curious, but wary, little red squirrel.