Froggy In The Window My back door has a big window in it that I keep open so my dog can look out of whenever she wants. Usually I close it at night because the dog ignores it then. Tonight was different though. The dog kept barking and barking at something she thought was on the porch. She was furious.

I thought she was barking at a reflection of her water dish, so I walked over and cartoonishly scolded the water dish reflection for her. It seemed to make her really happy that I was on her side. She wasn't quite so frustrated after that, but she kept barking.

After I had ignored her for awhile, I looked over at the door because her barking had changed. She seemed a little alarmed. There in the middle of the glass was this frog. It could be a toad, but who cares? It was climbing around on the glass, and the dog wanted no part of it. But I did. 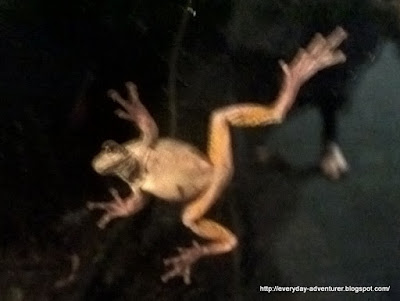 I grabbed my phone and took several pictures of the frog/toad. Most of them were too blurry because of the dark, but these two were kind of acceptable. I was so grateful to this little creature because I have no other sources for pictures right now because it just won't stop raining. Someday, one day I'll go outside again.

One more thing before I go. I wrote a new short fiction story over at my Rat Tales blog. It's called Davey And The Little Blue Bird. As I am of all of my stories, I'm proud of this new little bit of fast food for the mind. I haven't written a story in a long time until now.

This story is kind of a prequel to another story I wrote a few years ago. They both share a common character. You can find a link to that other one on the blog there. If you do decided to take a look, I hope you like it. The story is also linked to a series of stories I wrote. If you read them all, you might recognize a few characters.

But anyway, there's always my next post right here at The Everyday Adventurer. I'll have that just as soon as it stops raining or if I get another little critter at my window. Who knows what could happen? So I guess I'll talk to you later.
Posted by Ratty at 6:00 AM 14 comments:

Waiting For The Flood 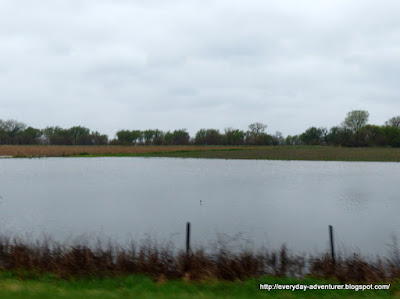 They keep telling us it's going to flood around here, so I'm waiting. I drove around and took some pictures to see how close we are to the flood coming. The river is rising, but it doesn't seem to be there yet. We'll see if it really happens.

What you see above is an area in one of the fields that never seemed to dry up after the flood a couple of years ago. It's a little bigger after all this rain we keep getting and getting and getting. When it finally does warm up a bit I expect all sorts of water birds. I can't get pictures of them though because this is right on the highway.

Just past those trees in the background is the river. It's not the biggest river right through here, but it's not exactly small either. As I found out before, when it floods it can wipe out the whole area. I'm glad I live on pretty high ground and I have a back way out, otherwise I'd be trapped. 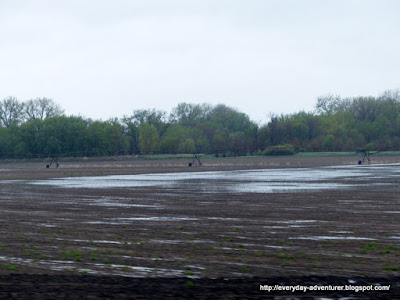 There is so much rain that the ground just can't absorb any more. There are huge puddles of water in every field between the highway and the river. I have to say that I'm not very worried that it will flood. The conditions are different than last time. But there is a very real possibility. We'll find out in a few days.

I kept saying before how I'm going to go out to the nature parks a lot more again this year, unlike the past couple of years. My problem so far is that it's been raining non-stop for the past few weeks. Spring got here very late, but when it got here all we get is rain. 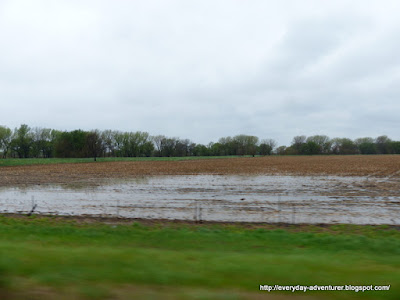 Maybe I should go out anyway. I used to go out in all sorts of weather. I didn't care about the rain. Here it seems like one trip to a nature park is more of a big deal than it was where I used to live. Maybe I need to get over that way of thinking.

I'll have to think about all of this between now and my next post. Either I'm going to have some new pictures of nature trails for you, and maybe some cool stuff in with them, or I'll be showing you pictures of the flood. Floods are interesting. We'll see what happens. I'll talk to you later.
Posted by Ratty at 6:00 AM 12 comments: