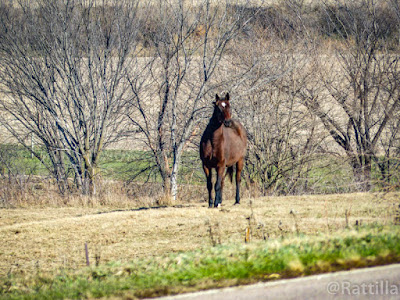 I went out on an adventure this week with the hopes of changing the whole internet with the sheer force of the spectacular pictures I was going to get. It was a few miles down the road that a tragically unfortunate event happened.

That's right. I got a flat tire. Now, you might think that's just a temporary setback. It's not at all the tragedy that I'm describing. You might think. But to my dramatic brain, it's practically the end of the world. My adventure of all adventures was over!

But then something happened. As I got out of the truck to examine the damage of my ravaged tire, I smelled something horribly bad. Yup, it was the pig farm where I had stopped to fix the tire. But that's not really what happened. I was expecting the horrible smell. It was something else. There were eyes on me! 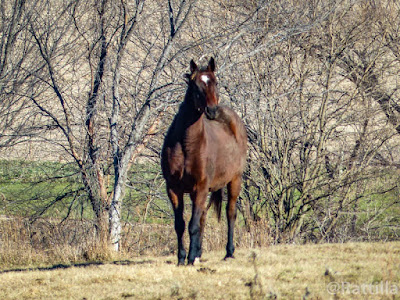 As I looked up, there across the road was a lone horse staring right at me. It was examining me very closely as if it was gathering information to take back to all the other horses so they could laugh at me, or maybe even to its evil master. It was going to reveal my tire changing secrets to the world. Noooo! 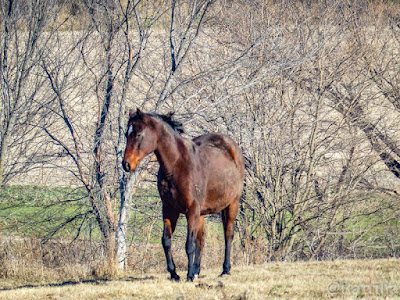 I wasn't going to put up with this intrusive examination from this all too obvious spy horse. So I whipped out my camera in dramatic fashion, and I began taking pictures of this way too interested creature.

Of course, the examiner didn't like being the examined, so it decided to make itself scarce. It quit staring and turned around to make a speedy escape. 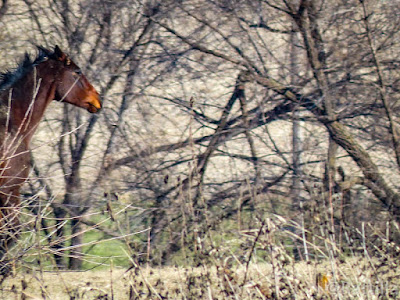 I haven't been taking enough nature pictures recently to be able to keep up well with all of this fast movement, so the pictures didn't exactly turn out quite like I wanted. I had lots of chances for great pictures, but my lack of practice blew pretty much all of them. 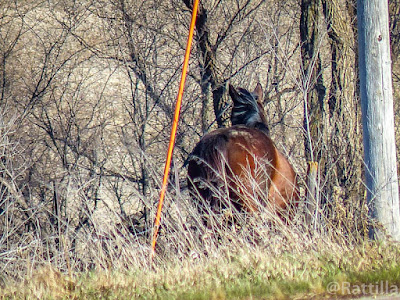 After this little incident, it took me some time to fix my tire. My all-time greatest adventure was over before it really began, but I did get some pictures of this one lone horse.

As I drove a short way down the road, I found this evil spy horse conversing with another. I just know they were laughing at me because of my recent unfortunate situation. In my humiliation, I took no more pictures. I just slunk on down the road toward the bigger town 20 miles away so I could forget this tragic event ever happened while eating a bunch of tacos. I'll talk to you later.

A Big Flock Of Wild Turkeys 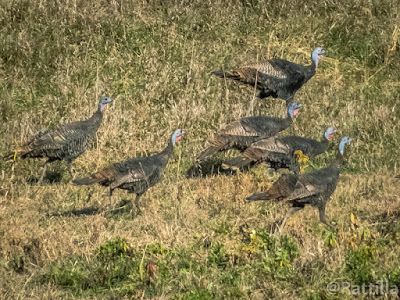 Today I'm bringing you this flock of turkeys I found at Broken Kettle Grasslands. The pictures aren't the best. And they're certainly not as good as the pictures from my last post. But in my defense, the turkeys were kind of far away.

Also as you can see, these birds really blended in with the background. I saw them only because they were constantly moving. And when I went to take pictures of them they decided I wasn't welcome, so they were always moving away from me. 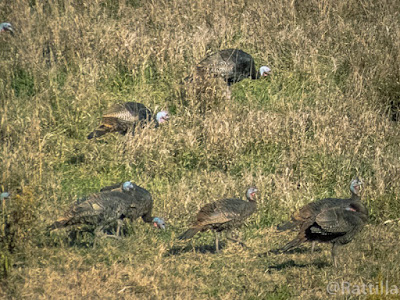 The flock was much bigger than I'm able to show here. I took pictures showing the size, but the birds were so camouflaged you would have to squint to see them. These closer pictures are hard enough. I took these at various parts of the flock while they tried to escape me. 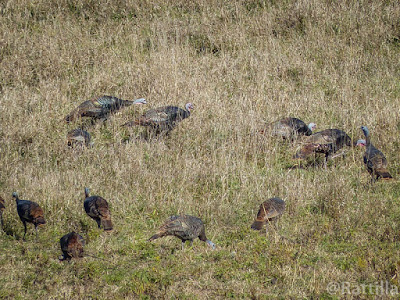 Turkeys are very common around here. Most that I see are in busier areas where I can't stop to get pictures. These are very far out in the country. There aren't many cars out here to run me over if I stand in the middle of the road. I was probably the only human for miles out here. My favorite kind of place. 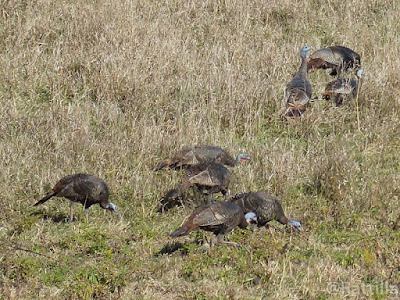 It's been difficult for me to get any exploring and blogging in because of work. My business activities have overlapped with my blogging most of the time. I put this post together late last night after too many necessary business tasks. I wasn't sure I'd have time, but I really needed to relax, so I decided to write this one.

I really like working right now, but my blogging and adventuring have always been the best way for me to relax. I think I need to do some more of this again. I'm really glad I got this one in. I feel much better.

I also went and saw the new Queen movie "Bohemian Rhapsody." I recommend it to everyone. There are not many things I like more than Queen's music. The movie wasn't 100% accurate, but it was close enough. And I think everyone should be Queen fans. And with the end of that mini promotion, I'll talk to you later.
Posted by Ratty at 6:00 AM 6 comments: