The Duck On The Dam 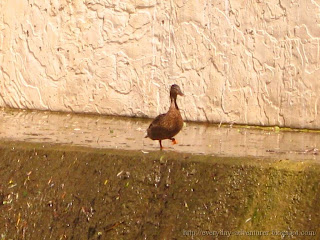 Sit down and let me tell you the tale of the duck and the dam. What? You're already are sitting? Good! I guess we can start now. Wait a minute! I just want to warn you that, so I can show you more pictures, this one's going to be a cliffhanger. Okay then, uh, what was the story again? Oh yeah, the duck and the dam. Here we go!

I happened to be out looking at the lake where I like to watch the geese, and there wasn't really that much going on. No geese, no cormorants swimming around trying to look like little lake monsters. Just nature and a quiet lake. That's when I heard a strange sound coming from the dam behind me.

The sound was the quack of a duck. This wasn't just any quacking sound though. It really did sound kind of strange. The duck was making a sound that led me to believe there was something wrong. It was almost a strangled cut off sound instead of its normal quack. 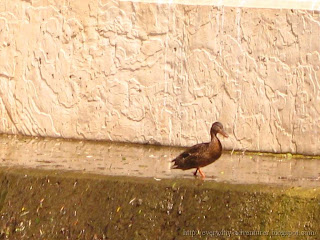 I turned to look but I couldn't see the duck that was making the noise. So I walked through the heavy grass to the other side of the dam. There is no path to get there, and you have to walk down a steep slope that leads down to the creek that the dam empties into.

When I got there, I saw the lone on top of the dam. I couldn't see it before because there is a short wall up there that separates the front and back of the dam. The duck was standing there looking as odd as it sounded. It was still quacking strangely, and it looked as if it were in some sort of distress.

It soon began pacing back and forth, looking as if it were confused. It had something on its mind, but I couldn't understand what it was. The duck didn't look injured or anything like that, but as I watched it, I began to understand that it was worried about something. It was doing that funny sounding quack the whole time. 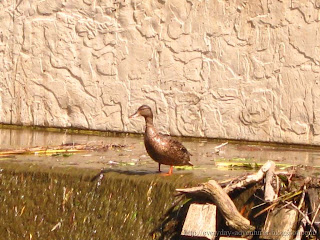 As it got to the middle of the dam, its pacing shortened to only that area. It actually turned around several times before it finally stopped. That's when it began looking over the edge of the dam. The strange quacking continued!

It began to duck its head as if it were studying how high the dam was. Maybe it had a hurt wing and couldn't fly. It looked as if it wanted to get to the creek below, but it didn't want to fly. It began making motions as if it wanted to actually slide down the side of the dam! I knew I had to watch this.

I watched as the duck looked down at the creek while it made that odd quack. Then it would move its foot over the side of the dam like a swimmer testing the water for the first time. Then it ducked down, tucked its legs in, and leaned over the edge a little bit. That's when the duck leaped over the edge the dam! 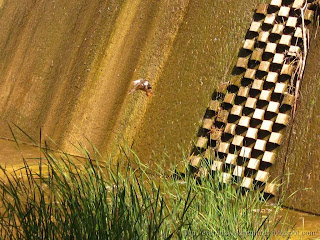 I guess it was more like a jump than anything else. The duck halfway slid, halfway flew, and halfway jumped down the edge of the dam. That's a lot of halfways! It finally splashed into the creek below. I couldn't see that part because it was behind the tall weeds in the water.

I'll have to end this part of the story here. If I didn't, it wouldn't be a cliffhanger would it?

Tomorrow I'll reveal just what the mysterious problem was with this duck. Was there something wrong? Did it have a broken wing? Was it drunk or crazy? Or did it just have a bad case of constipation? Tune in tomorrow for the answers to at least some of these questions.
Posted by Ratty at 3:45 AM