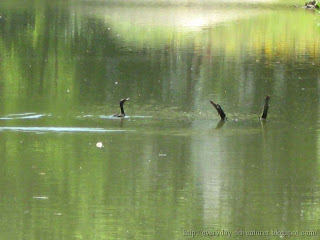 I have something very interesting to share with you today. Well, actually I have a combination of interesting things. I guess I can reveal right away that both things involve this little double-crested cormorant.

Ever since I saw a cormorant swimming in this lake for the very first time, I thought I saw something very familiar. When a cormorant is in the water it looks very much like the pictures I've seen of the famous Loch Ness Monster, or a picture of a dinosaur. This makes these very birds fun to watch.

There is something even more interesting in this post about this particular bird though. I think this is probably the same one I've been watching all along. There have been as many as three out here at the same time. Today I got to watch this bird do something fun. 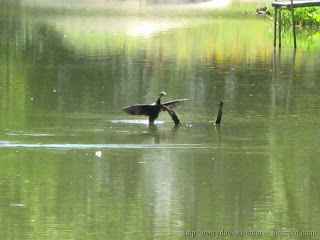 I watched very closely as this bird swam up to it's usual perch on the lake. I knew exactly what I was about to see. This bird swam straight to the perch and then slowed down as it got near. It began to look around, and then it...

Can you tell that I'm hesitating a little bit? I'm doing it on purpose because that is exactly what the cormorant did. I was taking continuous pictures of the bird as it approached, but it took so long when it got to the perch that I had to stop for a few seconds. I lifted the camera just in time to capture it as it jumped up onto its favorite perch! 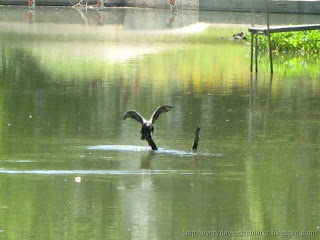 A bird perched on a branch in the middle of a body of water isn't that unusual, but being able to watch it as it jumps to its perch is something you don't get to do every day. Getting the pictures to show everyone is even more unusual. I wish I could show you the whole event.

I actually watched as this bird swam all the way from the other end of the lake to this perch it finally ended up on. It was fun seeing only a speck in the water at first, and then watching it perched closer by and drying its wings off. I was even able to move down closer for some better shots. I hope to show you some of those in a few days.

Until next time, The Everyday Adventurer (feeling a little better every day) signing off.
Posted by Ratty at 3:26 AM