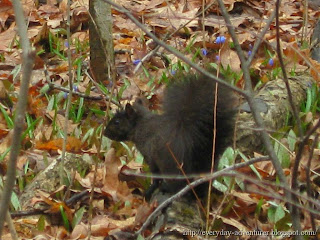 I have breaking news from the forest! The war is over! Yesterday I finally got a decent picture of the elusive black squirrel. This has been one of my longest adventures, with many twists and turns. I was beginning to think I couldn't do it, but here it is.

I got a few good pictures and several bad ones. The squirrel noticed my presence as soon as I took the first shot. It quickly turned and ran away, but I still did what I needed to do. This is a great victory in my battle with the squirrels. Along the way, I learned some interesting information. 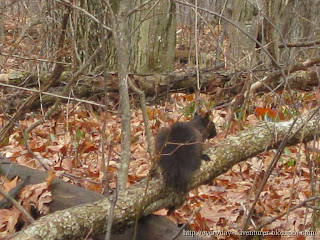 Black squirrels are rumored to have been brought to this area of lower Michigan from the Upper Peninsula of the state. There are similar odd stories of the origins of black squirrels in several parts of the country. I'm not sure how true any of these are, but I've seen these more than any other.

Another thing I read was that black squirrels are actually gray squirrels with an unusually large amount of dark pigmentation. This story goes that at one time the northern part of the United States was thickly forested, and supposedly the vast majority of squirrels were the black variety.

As Europeans came and cut down the forests, the squirrels dark color stood out to make them easy prey for human hunters and any other predator. The squirrels that were left naturally adapted to a lighter gray color. This one sounds logical, but I'm still not sure.

Another thing I read was that black squirrels were known to be plentiful in the city of Detroit, and it is one of their origins. There is a huge problem with this one for me. I grew up in Detroit, and I don't remember ever seeing a black squirrel there. There were the reddish brown fox squirrels, but not any of these. Maybe I'll never know the real story. Does anyone else have a story? 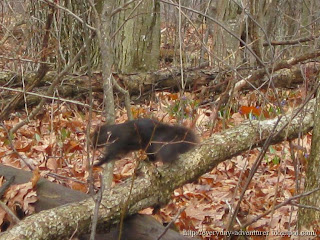 Okay, this last photo is obviously kind of blurry. After this squirrel saw me, which happened very quickly, it ran chaotically away. The blur illustrates how fast it moved away, and how evasive these little critters can be.

Getting this close at all has been one of my greatest challenges so far. I never thought getting a picture of something that seems so common would have been such a difficult thing to do. In the end it all turned out okay though, because I got what I wanted, and now I can share it with the whole world. We all win!