Jack And The Rabbit

Here's a little fairytale I wrote in honor of the upcoming holiday, but it can be read even without the holiday in mind. It may seem to be more of a child's story, even though the first Jack story probably isn't. I still hope a few adults can enjoy it too.
Fiction Friday
A while ago, I told the story of Jack And The Magic Stick. It was the real story of Jack And The Beanstalk. In that story, Jack made quite a bit of money by doing some awful things with a stick he got in a trade for his mother's only cow. His mother was completely fooled, and she thought he just traded the cow for a nice sum of cash. She also thought Jack had mended his lazy ways.

Since then, Jack's family farm began to prosper. Jack continued to earn easy money with his horrible stick exhibition, and his mother, not knowing of this, used the money to buy very many more farm animals. It seemed like everything was good, until Jack's mother made him help on the farm.

One of the animals she bought was a little rabbit that didn't seem very healthy, but Jack's mother felt sorry for it. She took it home and soon nursed it back to health. The rabbit now seemed very happy in it's new home. There was only one problem though, and that problem was named Jack.

Jack didn't like the rabbit, because his mother paid so much attention to it while it was sick. She had to do it if the rabbit was going to get healthy. The rabbit became her pride and joy, because it seemed to appreciate her help so much. This of course made Jack extremely jealous.

He didn't like any of the animals on the farm, and never had a good word or look for any of them. He hated his new job as a farmer, and he made it no secret to anyone, except his mother. He especially liked to release his wrath on the rabbit.

He would chase the poor thing around with hedge clippers, and threaten to cut off it's long ears. One time, he grabbed it by the ears and flung it across the yard! It was amazingly unhurt, because Jack's mother kept it very healthy. He also terrorized the other animals so bad that I can't mention most of it here.

Meanwhile, Jack's mother didn't know any of this was happening. The animals thought she was just the most wonderful human being ever. They would do anything for her. They always made sure that they did there share of the work on the farm, and more. She loved all of the animals, and they loved her back just as much.

The cows always gave her plenty of milk. The sheep gave more wool than she could ever need. And the chickens didn't mind laying eggs for Jack's mother, even though they knew what she used them for. After all, laying eggs is what chickens were for. They were happy to help the farm.

Jack didn't care for any of this! He desperately hated being a farmer. Trouble was what he liked, and trouble was what he caused. One of his favorite things to do was to steal the chicken's eggs and throw them at the other animals. He loved the way they would splat against their heads.

The rabbit, who wanted to stop Jack's bad behavior, decided to save the eggs by hiding them from him. So he asked the chickens to help him. First, he figured out a way to keep Jack from splatting those eggs if he ever did find them. He asked the chickens to boil them until they became hard. They wouldn't splat now! Then the animals disguised the eggs by painting them all different colors. 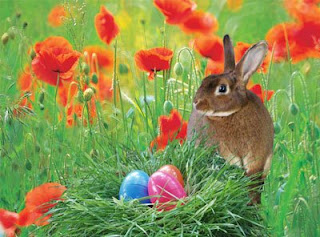 When the animals were finished disguising the eggs, the rabbit hid them all over the farm. He thought Jack would never find them now. Then when Jack gave up looking, the rabbit would show Jack's mother where they all were. It seemed like the perfect plan in the mind of a rabbit.

When Jack went to steal the eggs so he could throw them at the cows, he found nothing there. He thought that maybe there weren't any eggs yet today, so he promptly left to find other mischief to cause. As he was walking through the grass by the house, he accidentally kicked something.

He looked down and saw what seemed to him like a colored rock. He picked it up, and delightedly thought to himself that it was the prettiest rock he had ever seen. It looked kind of like an egg, he thought. Just as he slipped it into his pocket, he spotted another one just a short distance away.

He took a step towards it, and promptly tripped and fell. He felt something crunch in his pocket, and reached in and pulled out the colored rock, only to find that it was now cracked all over. He noticed he could peel off the outside, and began to do so. Not being very bright, he took a bite of the soft egg within.

Luckily, he discovered it was good! He now knew it was an egg, but didn't know how it got that way. He was completely delighted! He quickly began searching for the other eggs. He didn't want to splat these, they were good. He was having so much fun, and he wanted to show this to his mother. He thought this was much better than an illegal scheme. He could show this to everybody!

The rabbit saw all of this, and understood that this was a good way to make children happy. If they were happy, maybe they wouldn't cause the kind of mischief that Jack used to do. He decided to tell other rabbits about this so they could tame any unruly children they might meet, and also to reward all of the good children. It worked well both ways!

Hiding eggs became a very popular thing for rabbits to do. They loved watching the delight on the children's faces when they would find them. The rabbits liked this so much that some of them still hide colored eggs for children to this very day. 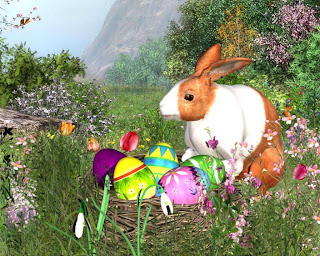