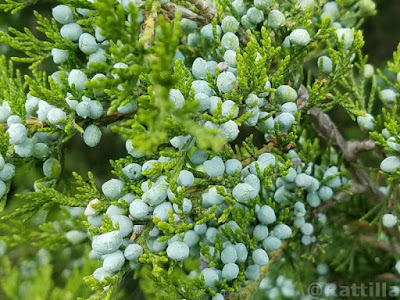 What you see in my pictures are something my mother called cedar berries. She always thought this was probably wrong because she guessed this tree wasn't really a cedar tree. Well, the answer to whether she was wrong or not is yes and no.

As it turns out, after checking a recent field guide I found, I have come to the conclusion that the tree that grows these berries is called Eastern Redcedar. I have to say now that I notoriously often get plant identification wrong. But even if this isn't the right kind of tree, I know it is closely related.

Anyway, as to the yes and no answer, while this tree is called eastern redcedar, it isn't an actual cedar tree. It is really a juniper. And these supposed berries are actually a kind of cone rather than fruit, even though they really do resemble a berry inside and out. Birds love to eat them for that reason. 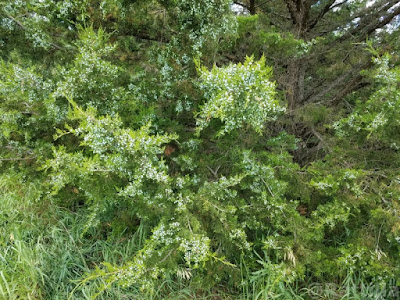 So I'm guessing that when my mother heard the name of cedar berries for these berry-like cones when she was a kid, it was maybe a common name for them at the time. Maybe it still is. It wasn't that name that was wrong, but the real name of the tree is kind of deceptive. So there's your answer.

And with all of that, I gave you a lesson on this tree and a little history lesson all in one. Even if my identification of the tree is horribly wrong, the story is still kind of interesting. At least it was to me. 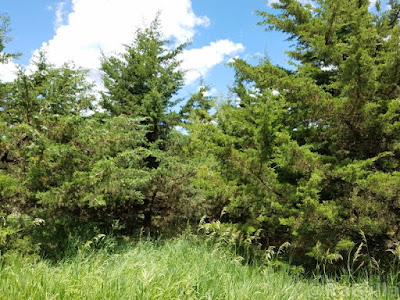 These trees were growing around the pond I recently showed you. You can also see them in pictures in my last two posts. I don't usually find trees to be as interesting as this. But I also don't usually get this much information about any of them either.

I would love to tell the stories of many more trees, but I usually just don't know much about them. Maybe that will change now. The guide for trees I found is specific to Iowa so it probably wouldn't help most of you. But it sure did help me a lot. And it was easy to use.

And so we come to the end. I'll be back next time with some nature thing. It should have some pictures and a few words in there somewhere too. Maybe you'll think it's the best thing you've ever read because it's about your favorite thing. I'll talk to you later.
Posted by Ratty at 6:00 AM