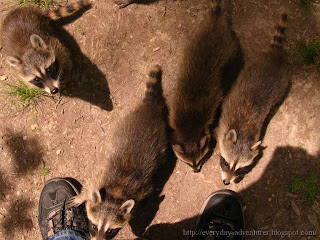 I ended the first part of this story yesterday as six raccoons were running towards me. When I first saw them I had no idea what their intentions were. I only knew that they were very interested in me. I thought they would run away when they saw me, but they only came on faster.

If you haven't seen part one of this story, you can go here to read it: Raccoons

As they were quickly moving closer to me, I noticed that the majority of them were only juvenile raccoons. They were not full grown yet, and they were only about half the size of a full grown raccoon. I watched to see which one was the mother, but I quickly realized she wasn't there.

That was a relief! I didn't want to deal with an angry protective mother raccoon. Raccoons can be very dangerous animals. Probably the most dangerous I've met yet. Their teeth and claws are very sharp, and they like to use them. This could have turned into a very bad situation for me. 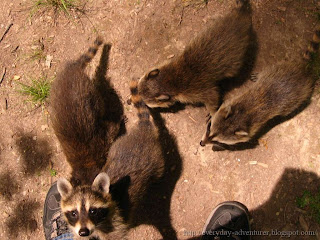 As you can see by the first two pictures, they reached me. Before they got to me I could see that they were just curious, so I held my ground and let them come. They got to me and began curiously moving all around me. I liked them immediately! Just look at those cute little faces!

They were staying very close to me. I had the whole crowd of them at my feet. One of them was walking in a circle around my left leg. Two others decided to stand up on my legs a little bit so they could get a better look at me. They were trying to figure out just what I was. They were more curious of me than I was of them.

Make no mistake though, I was very curious about them. I knew this was the best opportunity I've ever had to get closeup pictures of wild animals. I was alternating between trying to focus my camera on them and making sure I got to really look at them with my own two eyes. This was maybe the most amazing experience I've ever had! 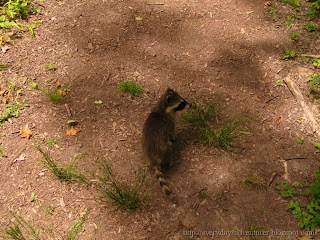 The mutual admiration went on for a few minutes until I noticed a straggler. There was one of them that was holding back. It wasn't quite so sure that this new creature they discovered was entirely safe. It was the shyest and probably the smartest of the bunch.

While I was looking at it, the shy little raccoon finally let it's curiosity get the best of it, and it finally joined it's family at my feet. I continued to hold my ground. I wasn't sure what to do now, so I took more pictures while the little raccoons kept walking around me.

Finally I decided that this was enough so I moved my feet a little bit, and the shy one turned and quickly started walking back down the trail from where it came. When the others saw this, they decided that it was best to keep the family together, so the whole group turned and reluctantly followed the other one down the path. 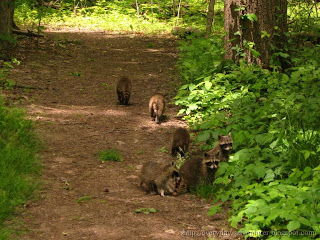 I took more pictures as they fled from me down the path. I thought this was the last I would see of my new friends, so I took as many pictures as I could before they disappeared forever. They finally followed the trail around a corner until I couldn't see them anymore.

This was not the end though! I happened to be going in the same direction as these little ones. It probably would have been wiser for me to turn around and use another path to the back of the park, but I honestly thought they would stay away from me now. I thought they were afraid of me now because they decided I was a threat. I was never so wrong before.

If you haven't guessed yet, the story doesn't end here. The next part will be the third and final part. The best stories are all trilogies anyway. It will be the most action packed part of the story. There will be another twist to this story that you might guess from these first two parts. Can you guess what it might be? Don't miss tomorrow's exciting conclusion of my encounter with the raccoons!
Posted by Ratty at 3:23 AM