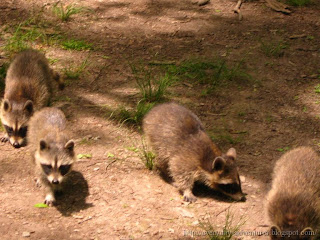 I have an astounding story to tell you. This happened to me only yesterday, and it might be the most significant and unusual animal encounter I've ever had. I'm going to have to tell this one in multiple parts because this story is too big for just one post. I have very many pictures I hope to show you with the full story. I hope you enjoy this one.

When I went out hiking yesterday I was really hoping to see the heron I showed you last time. I thought the day would be just another ordinary hike with a few small forest creatures along the way. I can tell you though that there is nothing that could have prepared me for what happened. My encounter was completely unexpected. 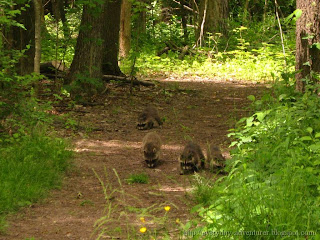 I entered an area of the nature trail where I have seen very many chipmunks recently. When I began looking for them I found something else entirely. That's right, you guessed it. What I saw were four raccoons on the trail walking out of the shadows right towards me!

They didn't seem to notice me at first, so I frantically began trying to get my camera ready for a few pictures before they fled. It took longer than it should have, but I was soon clicking the shoot button as fast as I could. That's when they finally noticed me and looked up in my direction. 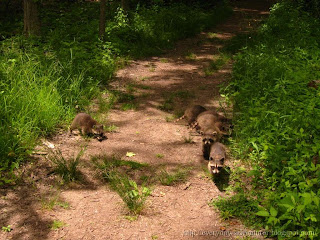 I thought for sure that they would run now, but they didn't do that at all! When they saw me they kept right on coming! As a matter of fact, not only did they keep moving towards me, they started moving towards me with a purpose. I can tell you now that I was a little shaken by this development.

As if that weren't enough, as they began to get closer their quick walk turned into a trot! They were now running right at me! They were running together and crisscrossing around each other, and their sole purpose was to be the first one to reach me. I soon noticed that the four I had originally seen had now grown to six! 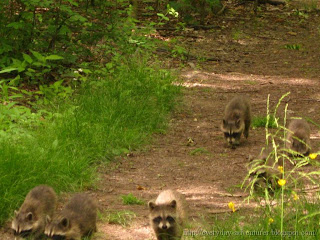 What did they want? This is the second time now an animal ran towards me. The other time was a squirrel that scared me thoroughly until it stopped only to stare at me from a tree. These raccoons did not stop. I've been wanting to see a raccoon or a possum or even another bigger animal like that, but I never thought of this! 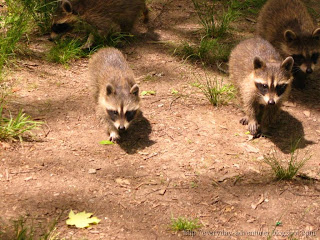 I'm going to end this part of the story right here. This will give me a chance to tell you the whole story without making you read a novel in a day. It will also enable me to show you many more pictures of this encounter. But what happened? Did they reach me? Am I injured? To find the answers to these and many more questions, tune in tomorrow. Same Rat time, same Rat channel! 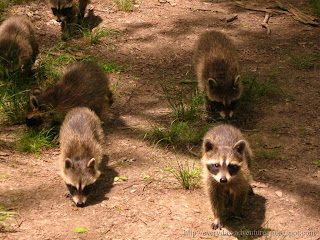