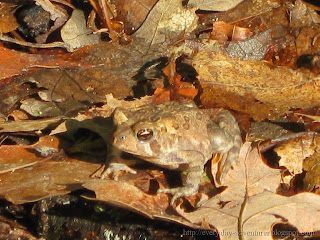 I finally found what I've been looking for! That's right, it's this little toad. It's called an American Toad because it's a very common toad in America. This is what those tadpoles I showed you a few days ago are going to turn into. I did another story about them a long time ago here.

It actually took me awhile to identify this toad because it looks different than most of the pictures of American Toads I found. I couldn't tell if it was a toad or a frog either. In the process of searching, I found out some interesting information about toads.

The first main thing I found out was that toads are actually just a type of frog. When I was a kid somebody told me that toads only looked like frogs, and that toads were actually reptiles, while frogs were amphibians. I believed that for a long time, although I always had trouble with that idea. Of course now I know that both are amphibians, and both are frogs too. 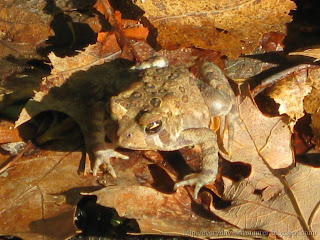 There are some differences between toads and frogs though. Toads have rougher and thicker skin so they can survive better in dryer areas. Toads also secrete a form of poison from their skin to protect them from predators. Most are harmless but you should wash your hands if you touch a toad, to get rid of any of this poison.

Toads also don't have any teeth, while some frogs do have teeth. That's why toads have that poison. They can't really bite a predator to protect themselves, so they need something. That's why they have the poison. For these reasons toads are gentle creatures. You might be too if you were toothless. 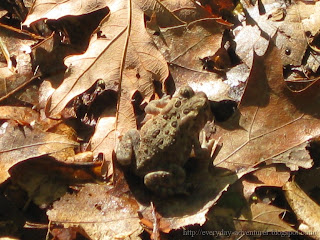 I just happened to find this little toad when I decided to take a shortcut to the fishing platform. I'll have to show that to you again pretty soon. Now that the leaves are on the trees, that place is even more beautiful. Anyway, while I was walking down this shortcut path I saw this little toad hopping down the side of the path too.

It was obviously trying to get out of my way so I wouldn't accidentally squish it. It stopped as soon as we both reached the bottom of the hill and the end of the path. I knew I had the perfect opportunity to get some good pictures of a toad for the very first time. I did exactly that. I must have taken close to fifty pictures of this little creature.

I'm not sure if you can tell from the picture, but this toad is only a little longer than one inch. That's about the length of one section of your finger from knuckle to knuckle for all of you who use the metric system. You can also look at the leaves in the picture to get an idea how big the toad is. 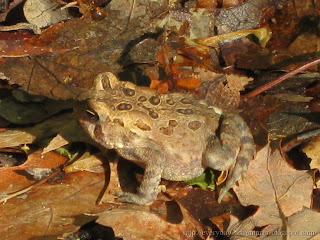 A good thing about toads like this one is that along with some birds, it might eat those spiders I showed you yesterday. As a matter of fact I noticed that robins like that trail with the spiders very much. They must be having a lot of fun eating all of those tiny spiders. Once the tadpoles become toads, they'll probably wipe out all of those spiders.

It's really strange how one little decision can change things. I almost didn't take that shortcut because it's not a real park trail. When I decided to do it I thought I might miss seeing a squirrel or something like that. How was I to know I would just happen to find this little toad?
Posted by Ratty at 4:06 AM