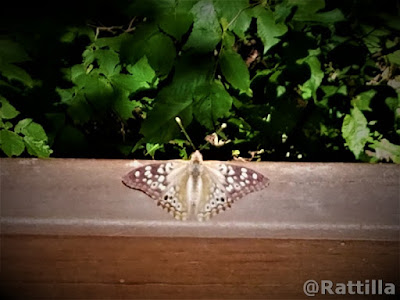 I went to Dorothy Pecaut Nature Center yesterday, which is an indoor and outdoor nature park. This is probably the best nature park around, and the most similar to my parks from back in Michigan. I love this place.

The only problem, which I've told you about many times, is that it is built on the side of the hills. Even with the hard to walk hills, I go here as often as I can. But there are so many nature parks around here that I try to split time between them all. But this time I went here.

So what happened on this trip? The title should give you a good hint. I was swarmed by butterflies! And I don't think my pictures or story can fully demonstrate this event as it happened. I'll try though. I'll try. 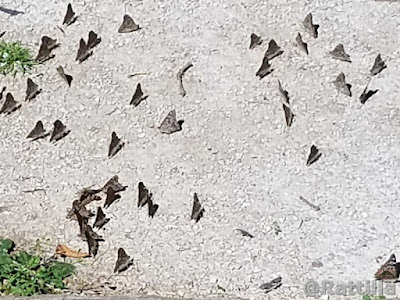 Then I got to the start of the trail. This is a dirt and gravel trail with wooden steps to get down to the lower part of the park. The park goes down a hill then back up even higher than you started. This is the place where the butterflies really were. 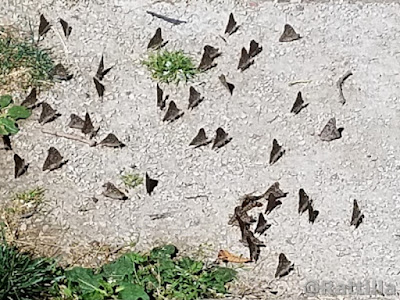 I had to walk through this butterfly swarm to get to the rest of the park. When I walked into the swarm there were butterflies bouncing off of me and landing all over me. You don't think it would be with butterflies, but it was really kind of disturbing.

I kept trying to gently brush the butterflies off of me, but I wasn't really fast enough. I didn't want to hurt any of them, so I was as careful as I could be. I really felt the need to get away, but I never really did. They were everywhere in the park. 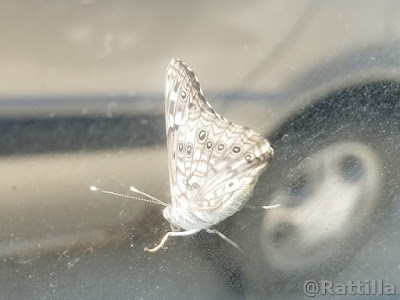 I wanted to take video, but the light was at such an angle that I was having too much trouble seeing my camera screen to hit the right button. I decided that I would do it once I got down into the forest where there was some shade and then come back. But when I came back there seemed to be almost as many people as there were butterflies, so I don't have video for you.

When I finally went back to my truck to cool off and rest my back I took this picture of a butterfly on my window. It's probably my best picture of the day. I had to edit the first picture a bit to fix the lighting so you could see the butterfly better.

So that's my most recent adventure. Right now I have too many pictures and stories from my everyday adventures to share them all. I'm just not fast enough. I'll do my best though. I love when this happens. It means I'm having fun. I'll be back as fast as I can. And I'll talk to you later.
Posted by Ratty at 6:39 AM