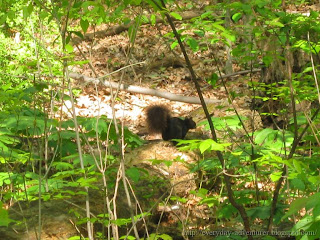 I saw something pretty exciting today! It seems I'm not the only one that's been chasing black squirrels through the nature preserve. What I'm about to tell you happened so fast that I didn't get any pictures of it, but the story is worth more than any still pictures anyway.

I was coming out of the park after a really good day, and I heard a commotion in the bushes to the left of me. I had been trying to get a picture of a bluebird. This noise ruined the whole thing! I've been experiencing miserable failure trying to get any photos of bluebirds, even though I've been seeing plenty of them.

Anyway, the sound I heard stopped for a second, but then it started up again even more violent than before. This happened twice! It was loud enough that I thought maybe there was a deer crashing through the brush back in the forest. 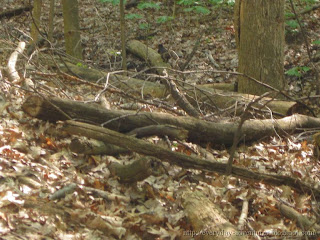 As it started up even worse the third time I realized it was something smaller than a deer, but moving much faster. The crashing sound started on the forest floor then quickly traveled up into the trees! I stopped and watched where it was coming from, but saw nothing yet.

All of a sudden there they were up in the trees above me! Yes, I said they! The first one was a black squirrel, running for it's life! The second one was a bird that was almost as big as the squirrel!

The squirrel was running and jumping from branch to branch, and tree to tree! The bird was flying just above and behind the squirrel! They were right above me, not far from the ground. They were moving like lightning! I tried to get a picture, but I didn't have a chance. Nobody would.

They were twisting and turning through the tightly close together branches. I have no idea how the bird managed not to crash into anything. It dive bombed the squirrel so many times I couldn't count! The squirrel was quick enough to evade every single attack though!

I watched them as they passed by me overhead. They crossed the trail, and then the squirrel was able to completely escape from the bird and disappear into the forest! This whole thing happened in only a matter of a few seconds, and it was one of the most exciting things I've ever seen in the forest! 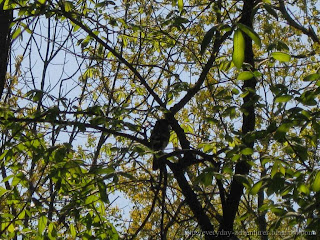 I have no idea why this chase happened. Did the squirrel do something to anger the bird? Was the bird looking at the squirrel as a nice big meal? Or was it all just a misunderstanding between the two? As many of you know, I've been in a few tense situations with forest animals myself. These usually happened because I was annoying them. Mostly my fault.

I think the bird in the above photos is the one that chased the squirrel, but I'm not sure at all. I've added a few pictures of black squirrels from today for you, but unfortunately none of them are the same one as in this story. It was exciting to watch it happen, and almost as much fun to tell you about. I love an adventure!
Posted by Ratty at 3:37 AM