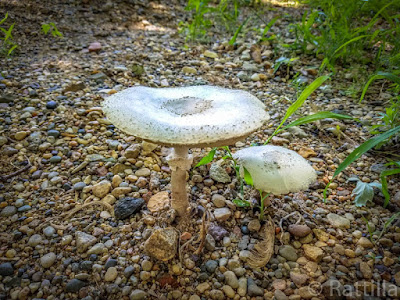 Are you surprised to see me? It's because I've been gone for so long. My computer has been down and my truck has also been down. So I couldn't go anywhere to get pictures and I couldn't post them here either.

Sure, I could've used my phone to post pictures, but that's too much of a pain. Although, I might do something like that in the future for a gimmick I hinted at a few months ago. And for that, I need my truck, which is still a problem for me. Maybe it'll be back up and running in a week or so.

In the meantime, I took these mushroom pictures right out in front of my house. These huge mushrooms grew there overnight. And I'm not very quick at doing yard work, so I just left them. Besides, they give the fairies something to rest on. 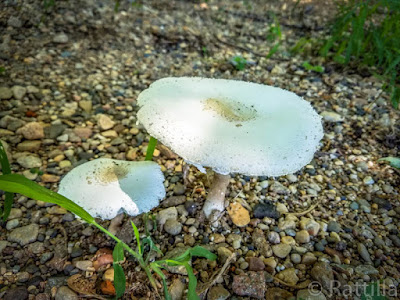 Back to my computer. These Microsoft updates have been a pain. I'm part geek, so I like frequent operating system updates, but I want them to not screw up my computers so much. I have three computers I use for different things, and with every update at least one gets messed up, usually a big problem.

I've had computers for a very long time, and I'm good at fixing just about every problem, but this new problem is the second one in a few months where I have to call Microsoft to fix it. I've never had to get help with a computer before in my entire life. I'm getting really fed up.

Maybe next time I'll have some good nature stuff. I'm still waiting for that bigfoot sighting I've been promising over the years. I'll talk to you later.
Posted by Ratty at 6:00 AM 8 comments: