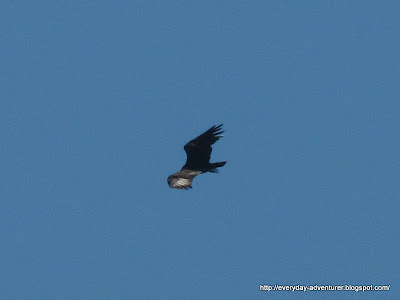 I had some excitement when I got into town here yesterday. there were turkey vultures and hawks flying around everywhere! Many of them were flying low where I was driving. I wish I would have had my camera along.I missed my opportunity at first.

But then when I got home I ran in the house and grabbed my camera. When I got back outside, the birds were a little farther away, but I was still able to get a few pictures. So I didn't lose out completely. I was lucky this time. I think I need to start carrying my camera with me again. I don't want to miss any more opportunities.

I remember a few years ago when I used to listen to the radio a lot while on my way back and forth to work, there used to be routine commercials for plays in Toronto. I don't usually care much for that kind of thing, but there were a few that I really thought would be good.

I remember thinking that I would wait and hope they would come a little closer to my home in Detroit. Well, that never happened. Later I felt like I could have kicked myself for passing up these opportunities. It wouldn't have taken long to go there and back, especially now that I know where to get flights to Toronto.

If only I had thought things through back then. I could have fond memories of those plays that I'll now never get to see. I live a little farther away now, so I don't hear the same radio commercials. But there is still the internet. The place must have a website. Maybe I'll take a look. Wouldn't that be fun to just pick up and go? 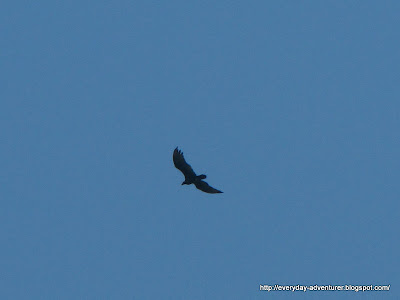 I just got my electricity fixed in my house. I had been sitting inside peacefully watching TV the other day when it all went out. It turned out that some fuses right on the electric pole blew! I had to have the whole box replaced. Now I'm back to being able to post here again, and I've been doing a lot.

I even have a new story up over at Rat Tales. It's been hard to write anything for my fiction site for awhile, but I finally have something for you. It's actually an older story of mine that I've revived. It's called Jack And The Magic Stick. It's a fairy tale of some sorts. You'd have to read it to see what I mean. I like it.

I hope to start catching up with some of my other blog stuff now that I can. I always miss this stuff when I'm gone for a few days.
Posted by Ratty at 11:33 PM 14 comments:

Flight Of The Dragonfly 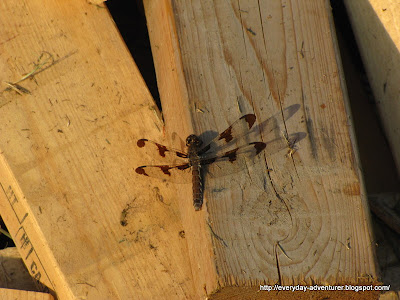 I'm getting back outside once again to take more pictures of the nature around me. I've been cooped up in the house for far too long. Sometimes you need the taste of sweet freedom. Maybe this dragonfly has the right idea. It's resting on these 2x4s right now, but it can fly away anywhere it wants to go whenever it wants.

That's what I want to do right now. I want to go to faraway places and see strange and exotic things. That's what happens to a person who has been confined to one place for too long. You just want to get out and go. Maybe I'll take a long trip.

Sometimes you gotta just take a chance and do something that seems like it might be fun. For some it might be picking up and traveling to a far away place. I know of a place offering flights to Johannesburg if that's what you like to do. Seeing and doing new things is what makes life great.

I love the photo editing I've been doing, but that's no substitute for getting out and seeing things and experiencing life. What do you think? Are you in the mood to travel? Where would you go if you could go anywhere you want?

Oh, the picture above was taken from a pile of wood that I'll be burning in my wood stove next winter. You burn anything you can get around here.

From Cloudy To Bright 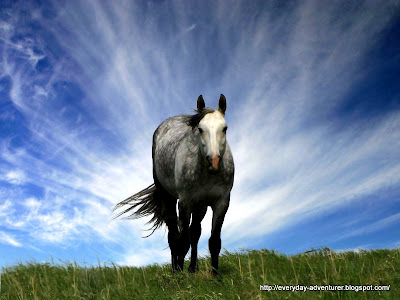 I've made my most dramatic photo edit so far with the pictures you see here today. You can see the original at the bottom of the post. The most obvious change is that I replaced the sky. It was a a dark and rainy day when I took the original picture, so I thought a change would be fun.

I also had to brighten up the photo just a bit. That was my subtle change in the picture. You may not even be able to notice that part. the horse has a little bit more definition to it now. I think the biggest thing I did though was to straighten out the grass just a bit.

Straightening the grass and the ground wasn't easy. there may be a better way than I used, but it's the first time I tried something like this. I think I did okay with it. Overall, the pictures I made aren't super realistic, but I like what I was able to do. They show the kinds of things that can be done with a free photo editor, such as Gimp. 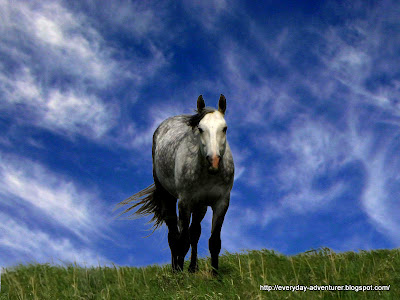 Another thing I've been up to is having to deal with my crashing computer again. I've known the problem for awhile, a bad solid state hard drive, but I've been waiting to fix it until the next version of Windows comes out. Well, I couldn't wait any longer. My computer once again crashed so badly that I had to reinstall the whole operating system. I've had to do that several times in the past six months.

I finally switched to another hard drive to end my problems. But after all of my problems I decided to have a little fun. Instead of installing Windows 7 once again, I decided to install the release preview of the brand new Windows 8.

Some people will tell you that Windows 8 is too different from previous versions of Windows. It's true that it is a drastic change from older versions. They'll also tell you that Microsoft removed the start button. That's not true. the start button is still there in Windows 8, but they moved it to something called the charms bar.

For those of you who think all this computer talk is mostly gibberish, you're going to love this new, easier version of Windows when it comes out in October. It's easier to use than anything else you might have ever tried before. And Microsoft is offering very cheap upgrades to it for everyone who has a previous version of Windows installed already. 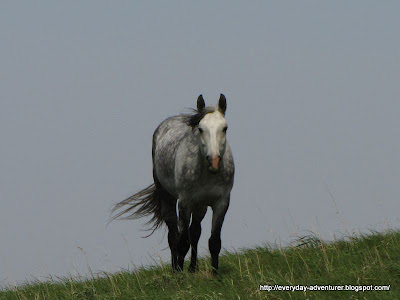 That was a long bit of nonsense for you to read, but I really do love talking computers. I'd start another blog about just that, but I already have my hands full with the blogs already have. Oh! You may recognize the picture above from one of my past posts. I like this picture of the horse, but it was fun messing around and changing it too.

And good news! I was able to get out a bit and get some decent nature pictures for my next few posts. My truck wasn't running well before, but the trusty garage down the road seems to have gotten it fixed pretty well this time. Maybe that will mean a return to more posts from me now. I can hope. Things are really looking brighter.
Posted by Ratty at 9:00 PM 8 comments: 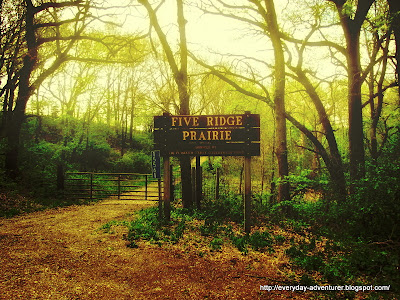 The big heatwave here is finally over. But I'm still staying close to home because my truck needs a little work done on it. That means I get to have a little more fun with my photo editing for awhile.

It wasn't too long ago that I visited Five Ridge Prairie Preserve and took this pictures. I always take a picture of the sign to mark my place on camera. I do that so I immediately know where my pictures were taken when I look at them in my archives. So these sign pictures are never intended to be special. I do try to make them at least okay though.

I decided to give this one a dark fantasy feel. I think it worked out pretty well. This area seems good for this kind of effect. I've been changing a lot of my pictures just to see what I can do with them. I always keep the originals though.some of those pictures started out very good. 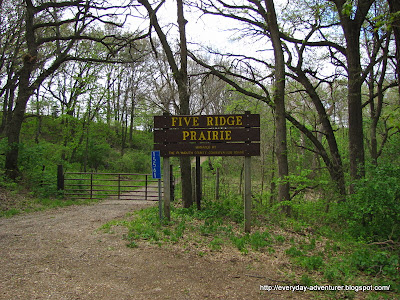 I've been learning a few things through all this editing. I've also learned to make subtle changes to bring out the reality of a scene a little better than the original pictures captured. I haven't done that here today. I wanted to show off my fantasy scene here. This second photo is the original.

I've also been learning a little more about photography and what pictures to take. I'm learning how to shoot at different angles and from odd places to get something more creative and special. That way I won't need very much special editing. I'll still do some crazy stuff just fore fun though.

I do have some more interesting edits I'll be sharing soon though. I have a few pictures that definitely needed changing and fixing. Sometimes a gloomy day just isn't a good time to take pictures, but it can be fixed up later. You'll see.
Posted by Ratty at 3:00 AM 11 comments: 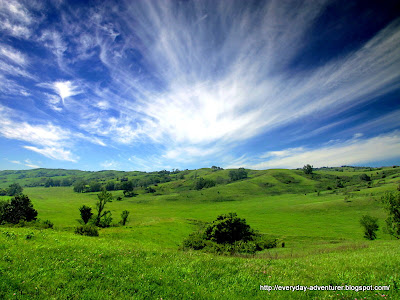 I've been doing some more photo editing because it's been a little too hot around here for me to get out lately. I still get dizzy much too easily, and the heat doesn't help that at all. So I've had a lot of time to work on my photo editing, and I like what I've been able to do.

The picture above is the result of a few changes. I first brightened it up and deepened the features of the land a little bit. This made the place look like it really did while I was there taking the pictures.

But the big edit was the sky. I took out the original sky and replaced it with a new one. This new sky makes the picture really stand out now. You can see the original picture with the original sky below. It really only took a few small steps to change this once I learned how. 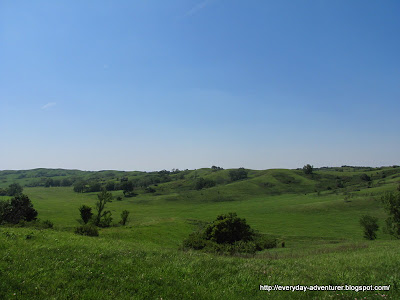 Now we have the original picture. It really looks kind of barren and dull after seeing the fixed up version, doesn't it? I didn't make a work of art or anything, but I think I improved it a little bit. I've been learning how to replace many things in my pictures, including whole people. It's been fun.

It really has been fun trying to see just what I can change in my pictures, and it gives a whole new life to my large archive. You might want to try a little photo editing if you ever get the time.
Posted by Ratty at 8:18 PM 17 comments: