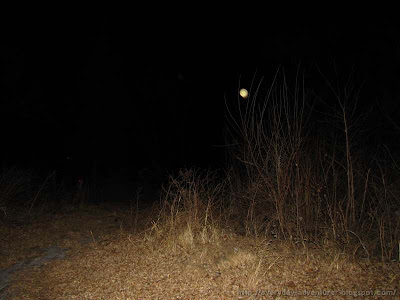 I hate to dwell on the idea of the orbs, but I have something new and unexpected for you. I took these pictures within an hour of writing this post. Yesterday I showed you a picture from the same general direction as the one above. It showed perhaps dozens of orbs floating around. I purposely did not clean my camera lens since then because I wanted to see if I could reproduce the same results tonight.

I couldn't reproduce the exact same thing. Instead of so many orbs, there was only this one very bright orb floating in a very suspicious place. This time instead of the gray color of all the others, this one is a tan color. It's hovering right in the same direction of a tree we cut down last week. I'm not sure what to make of that. We cut down that particular tree to make room for my neighbor's future garden. I felt bad about it when we did it, and I'm feeling superstitiously strange about it now.

this orb was so bright that I saw it on my camera's display screen after I took the picture. There are no light sources from that direction, and it is a cloudy night. It was very dark out there tonight. I was thinking that the orb effect from last night was possibly being caused by moonlight, but I don't know where this very bright orb came from. I am mystified. 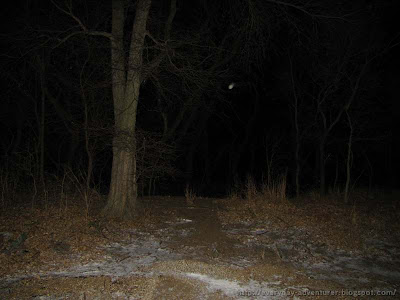 The first picture was taken as I faced eastward. In this second one I am facing south. As you can see, there is another orb that is suspiciously close to the same area of the picture as the first one. That could indicate that it is the camera lens after all. But I examined the two over and over, and they are not really in the same spot. If you enlarge the pictures you'll see they aren't as close as they look in the post.

Plus if you take a closer look at this second picture you will see that this orb has a bit of motion blur. Either it was moving or my camera was moving. I don't think a spot on my camera lens would show motion blur even while moving the camera. Trying to take pictures at night can easily produce motion blur while trying to focus on still objects, but nothing else in the shot is blurred. This could be easily explained, but not by me.

Another thing I want to add is that Isabella seemed to be in an unusual hurry to leave this area of the property. On most nights she likes coming down here to look around. Usually I have to pull her away, but on this night she kept trying to pull me away. There could have been many reasons for this, but I don't know what they might be in this case. 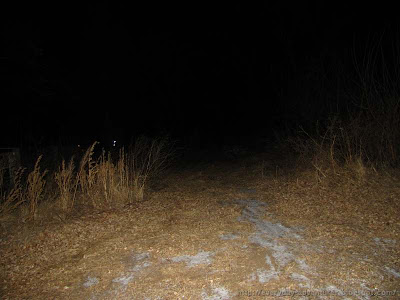 I took this last picture toward the east again. I tried to get a similar perspective as the first picture in yesterday's post. There are no orbs in this one, not even in the same area as the other two above. There is a distant light source to the middle left in this picture, so that light is not an orb. I took some other pictures, and they also showed no orbs. Some were before, between, and after the two pictures that do have orbs.

I had so much I wanted to write about this time, including Blogger's new commenting system where you can reply to other comments, but this new orb development is too fascinating to just gloss over. This story has to be told until I either find a solution or the orbs finally disappear.

I haven't gone back to that end of the property since I took these pictures because Isabella now refuses to go back outside. Her nightly pee walks are the reason I've been going out there. And I think I don't really want to go out there tonight if she's not with me. I don't know what's going to happen next, but I'm very curious about it.


Nature Center Magazine - Come get some!
Posted by Ratty at 3:00 AM