Frost On The Window 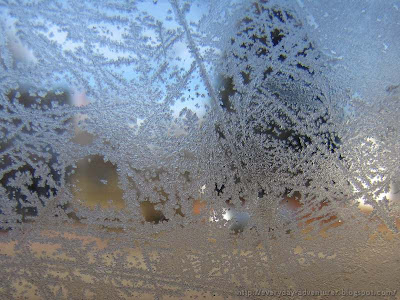 It's down to 1 degree Fahrenheit outside as I write this post. I've been out there several times to fill my wood stove. It didn't really feel very cold until the wind began to blow hard. I had to force Isabella to come back in because she wants to stay out there and bark at every little sound.

She usually doesn't like the cold very much, but she wants to be outside for some reason right now. Maybe that's because just a few short days ago the temperature was springtime warm. She enjoyed laying out there sunning herself. Maybe she misses that now and she's hoping this is just a trick. 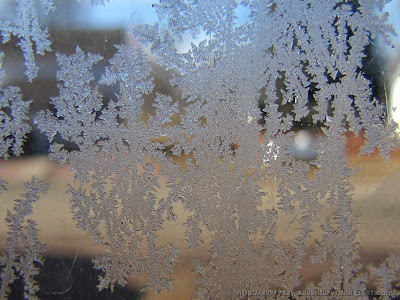 The window in the outside front door keeps frosting over for some reason. Maybe it needs to be cleaned. Maybe Jack Frost is drawing his frozen graffiti on my door because he's trying to get us to come out and play. I don't want to play with him because he's a cheater.

I've seen other people share some excellent pictures of window frost so I thought I'd give it a try. Mine are probably not quite as good as some, but it's my first try. And besides, I'm not the real artist of these patterns. Jack will share with me what he wants to share, so I have to use what he gives me to work with.