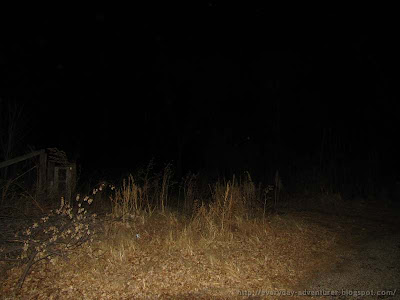 These pictures are my first attempt to get some good pictures at night. I tried a few things like changing the camera settings to nighttime mode, but none of them have worked so far. The only thing that works is to use the flash. I guess there has to be at least some light.

I haven't heard any animal sounds out there tonight so far, so I haven't tried to record any video. I'll try that if I go back out and hear any snuffling out there in the darkness. The camera usually picks up sound pretty good, and it's always quiet out here otherwise.

This first picture shows one of my outer buildings on the property. It's really just a rundown shed that I haven't even tried to explore yet, but I'll probably investigate the inside next spring. I'm in no hurry because i have too many other things to do right now. 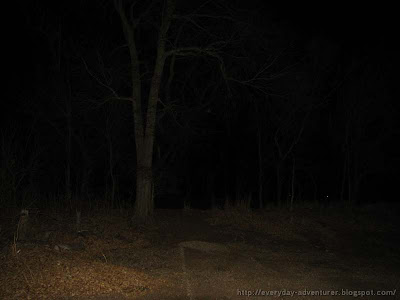 In the background of this picture is the ravine at the edge of the property. There's a creek at the bottom of the ravine. I don't like to get any closer to it in the dark because it's a long fall to the bottom, and I don't know if I could climb out of it even in the daytime.

My dad used to use a water pump to get water from the creek to water his garden that he had nearby. I don't know if the pump is still around, but I'll do the same if I can find it. He did it that way because the garden is too far from the house to get water from there. It can be done, but you need a very long hose. 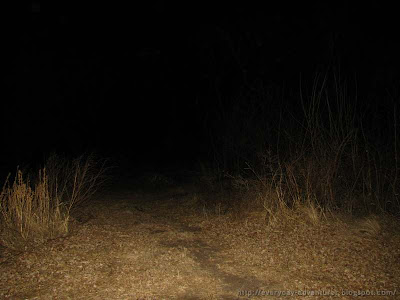 If it was daylight in this last one, you'd be able to see the large pile of firewood I've been gathering back here. This is far from the house as well, but the wood is still green, so we leave it back here out of the way to dry out until next year. I've been using some of the green wood though because my stove burns it very well.

I'll go back out to try again with the camera, but maybe not for another few posts or so. Nighttime is good, but I like the light of day jjust a little bit better. Talk to ya next time!