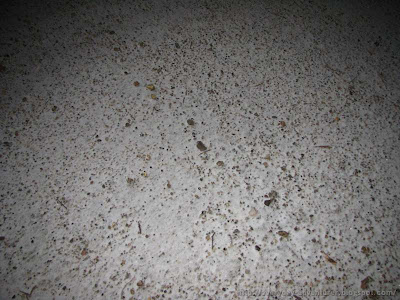 I've been having a bit of trouble with something lately. I've been seeing plenty of animals, but only at night when I can't get any reasonable pictures of them. I've seen rabbits, opossums, too many feral cats to count, and now I think I've seen a skunk.

A big part of the problem is that I was up all night Saturday, so I ended up sleeping in the morning. In the morning is when the birds and many other animals like to come around here. So I wasn't exactly conscious when all the animals were out having a good time in the morning Sun.

Now before I continue, and before you think it's my own fault for missing these animals after staying up too late, I'd like to say that it wasn't my fault. I have somebody else to blame, and a little story of why. And who is that somebody? 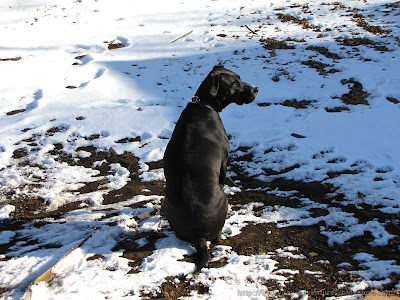 I came up with a good idea to give myself a rest from walking Isabella multiple times a night. I parked my truck out of the way in the garage and let Isabella out on the chain instead of walking her. It gives her all the time she wants out there, and I get to stay inside where it's warm. It was working wonderfully until about the third time she was out.

She had been out for quite some time when I went to the front door to check on her. I found her there out in the cold sitting in the snow. I thought that maybe she had frozen herself as I noticed her sitting there staring out into the darkness. So I went and forced her to come back inside. And I mean forced, because she didn't want to come.

It was only a little over an hour later that I let her back out after she pestered me the whole time. This time when I checked on her she was laying in the snow intently staring off into the same area of the darkness. After a few seconds she began creeping in that same low down pose towards something. She was stalking it like a cat, but she seemed like she didn't want to get too close to whatever it was. 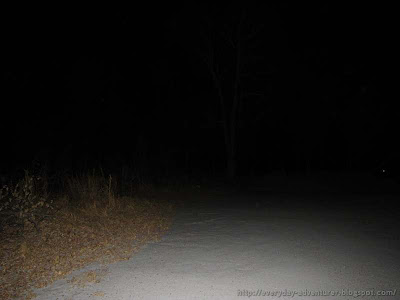 It was then that I noticed the strange sounds coming from the direction she was looking. It was the grunting sounds of a wild animal. I thought maybe it was a raccoon or a possum, but then I saw something white moving around down the road in the direction of the sounds. That was the dog's target, but she didn't seem to want to get very close to it.

I quickly dragged Isabella back into the house and went to the computer to find out what might be making those sounds. After checking several animals of the right size I came to the sounds a skunk makes. It matched perfectly. Not only that, Isabella then came running! She stood there turning her head from side to side while she stood there shaking and staring at the computer. I tried some other animals sounds, but she was only interested in the skunk sounds. That was my confirmation.

I decided to keep her inside for the rest of the night, especially since it was long past my bedtime. But the rotten dog wouldn't let me sleep! She was running back and forth in a frenzy. She kept walking over and pushing her head into the side of my bed. And if that didn't work, she would bark at me and loudly scratch on the walls. She was going completely crazy. This lasted all night long. 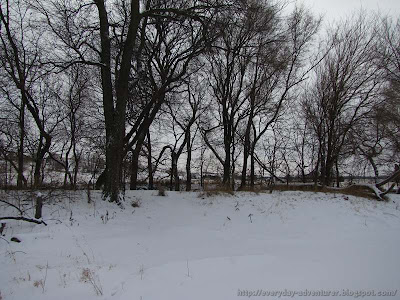 I finally looked at the window and noticed the sky was considerably lighter than before. The Sun was about to come up. I got up knowing I would get no sleep until I gave in. So figuring the skunk was long gone, I finally let Isabella back out. I smartly keep the end f her chain right at the door so I don't have to go out.

After she went running out I saw that I was right. She ran back and forth investigating everything until she began to slow with disappointment. She finally realized her enemy was truly gone. Now that she knew everything was safe she finally decided to come back inside.

When she got back in she immediately went over to her doggy blanket and went to sleep. I decided to get some sleep myself. This time it finally worked.


Nature Center Magazine - A snowboarding crow? You'll have to see it to believe it!
Posted by Ratty at 3:00 AM