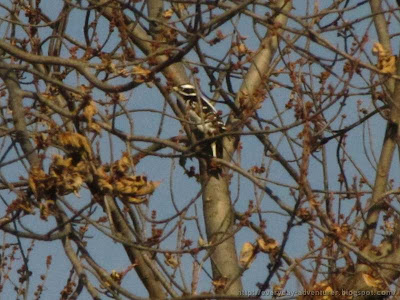 I went outside today and upon opening the front door I began hearing something I haven't been hearing around here recently. The chirping of birds! I guess they've been all hiding out, thinking that winter would be here.

But today the temperature was in the 50s. it felt like a warm spring day outside. That's very strange for around here. In years past they would have been buried by snow right now, and the cold weather would keep most people inside.

Instead, I was hearing the sounds of happy birds in my trees in the front of the house. It sounded like am invitation for me to get my camera and come running back out for pictures. So out I came, camera in and. I soon began aiming the lens at every sound coming from the trees. 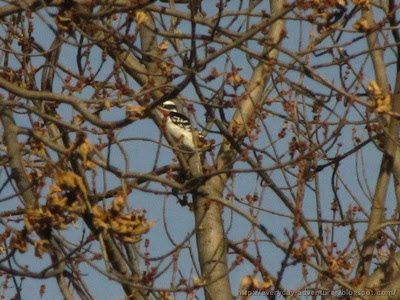 I quickly picked up a few pictures of this woodpecker. It wasn't quite as close as I'd like, but it was the most brightly colored creature in the trees. Only one problem was troubling me. The pictures were loking kind of funny. I then checked the camera settings to find out they were all wrong!

So I had to stop and take the time to reset everything. Then when I was happy that all of my settings were back where they were supposed to be, I pointed my camera back to the trees to capture more images of happy little birdies.

But then from behind me came another sound. It was a deep scary sound. The kind of sound that makes birds for miles around flee in total terror! "Woof!" 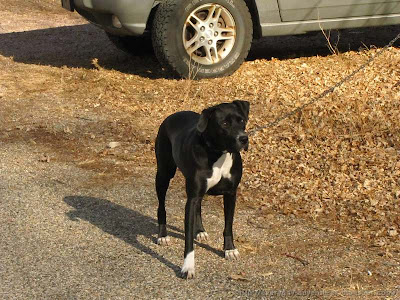 Isabella was having none of this picture taking. That woof sound was dog language for, "Pay attention to me!" I resisted for as long as I could, but the birds had all fled to better trees far away in a paradise where there were no big black monsters.

So inevitably my camera turned towards the only thing left around that was moving, except for an old plastic bag that was waiting to be picked up. Isabella did a great job of posing for the camera. I took many pictures of this oversized camera hog. But only one picture of my dog is very exciting for a random reader, so this is all I'll torture you with.