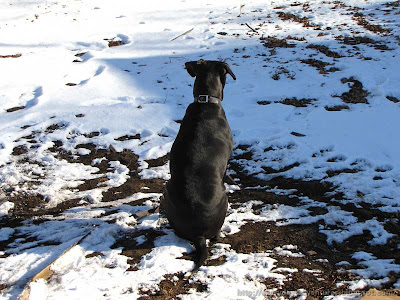 Isabella pointed something out to me the other day. Most of the time when I go out to fill the wood stove Isabella is right there with me. She loves being outside except on the coldest days. On those days she only likes going out if there is a guaranteed walk with the leash in the deal. So what was it that she told me?

I didn't know that yet! I was too busy with the firewood. When I turned around I saw that she was intently staring at something. I kept looking at her to see what she was so fascinated with. Luckily I remembered to run in and get my camera to capture whatever was going on. 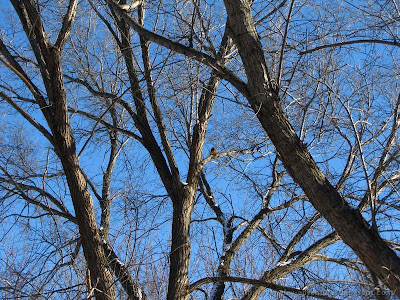 So when I came back out I saw that she was staring up into the trees. This obviously wasn't one of the feral cats that live in the area. Usually when one of those comes around Isabella goes crazy trying to get at them while they calmly walk by. They're smart enough to know she is on a chain.

So I looked up into the high parts of the trees to see what she was looking at. Can I draw out a story, or what? As I searched through the branches I finally saw what it was that she was staring at. It was a little brown fluff of fur on one of the high branches. That could only mean one thing. Squirrel! 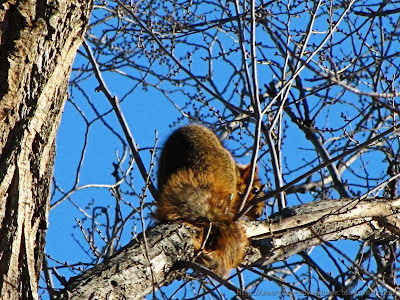 The squirrel also had its back turned toward me for some reason. For awhile I thought it was asleep or something, but then I noticed that it was moving a little bit.  It was gnawing on the branch it was on, exactly what Isabella wanted to do to the squirrel.

Isabella had pointed out another animal for me. I immediately knew this was the same squirrel that lives in the closest tree right out there behind my house. Today when I went out the squirrel was in another tree chattering away at me as if it was mad. It finally climbed through the branches over to its home and stared at me for a few minutes before going inside.